Jordan and Turkey get cozy

Jordan and Turkey are boosting political, trade and economic ties amid regional challenges and shared interests in the outcome of nearby conflicts. 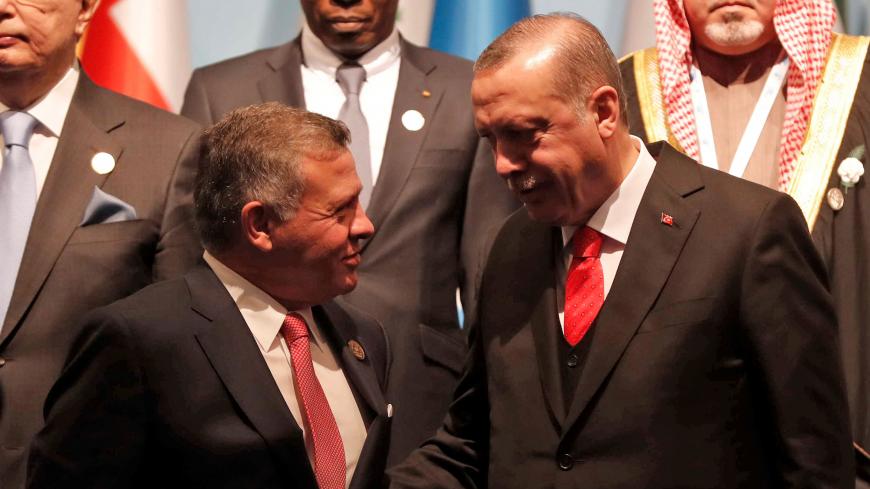 Turkish President Recep Tayyip Erdogan (R) chats with Jordan's King Abdullah II as they pose for a group photo during an extraordinary meeting of the Organization of Islamic Cooperation, Istanbul, Dec. 13, 2017. - REUTERS/Osman Orsal

Jordan and Turkey are bolstering ties in a bid to unify positions toward regional challenges where the two countries share mutual interests, including the Israeli-Palestinian conflict and the Syrian crisis. King Abdullah II hosted Turkish Foreign Minister Mevlut Cavusoglu and Gen. Hulusi Akar, the commander of the Turkish Armed Forces, on separate visits to Amman over the course of two days, Feb. 19 and 20, respectively.

Cavusoglu met with the Jordanian monarch to review bilateral relations and the latest regional developments, according to a Royal Court statement. The king stressed his “keenness to continue coordination on issues of concern to the Islamic nation and enhance security and stability of the region.” Moreover, the two sides discussed economic cooperation and bilateral trade. Cavusoglu announced that his government “would revise the Jordanian-Turkish free trade agreement to facilitate the entry of Jordanian exports to Turkey.” He also said Turkey was looking into using the “Aqaba port as a regional hub for Turkish exports to various markets, including Africa,” the Jordan Times reported. A day later, Abdullah and Akar discussed bilateral military cooperation and the fight against terrorism, according to the Royal Court.

During a meeting with Turkish nationals in Amman on Feb. 18, Cavusoglu said that President Recep Tayyip Erdogan planned to visit Jordan in the near future. Erdogan last visited the kingdom in August 2017, and Abdullah had traveled to Ankara on Dec. 6, the day US President Donald Trump announced his decision to recognize Jerusalem as Israel’s capital and relocate the US Embassy from Tel Aviv to Jerusalem.

Erdogan shares Abdullah’s opposition to Trump’s decision on Jerusalem. On Dec. 13 in Istanbul, the king attended a special session of the Organization of Islamic Cooperation, where they rejected Trump’s proclamation.

The promotion of Jordanian-Turkish bilateral ties comes at a time when Amman and Ankara are recalibrating their positions in the wake of recent regional developments and in anticipation of the possible fallout of Trump’s Middle East peace plan, which is expected to be announced in the coming weeks. The two countries are yet to react to the news that the US State Department had sped up moving the US Embassy to Jerusalem, now scheduled for May 2018.

Abdullah is a strong supporter of the two-state solution as the only way to resolve the Israeli-Palestinian conflict, and he is committed to his role as custodian of the Muslim and Christian holy sites in East Jerusalem. Both issues could be affected by Trump’s peace plan and Israel’s far right coalition government.

Abdullah's pivot toward Turkey comes at a time when Jordan is worried that some key Arab states might be ready to embrace Trump’s plan even if it rejects the two-state option. There is a belief in Jordan, supported by anti-Iran statements from the Saudis, that Riyadh considers the issue of Iran as a regional threat to be more important and pressing than the Arab-Israeli conflict. Egypt’s position is unclear but will be crucial in determining the fate of the US peace plan.

It is no secret that relations between Amman and Riyadh have further cooled since Trump’s decision on Jerusalem. According to local analysts, the Saudis resisted calls by Amman to hold an emergency Arab summit on Jerusalem after the US announcement. In addition, Saudi Arabia was not satisfied with Jordan’s reaction to its moves beginning last June to pressure and isolate Qatar.

Amman did not cut ties with Doha, choosing instead to only downgrade diplomatic relations and close Al Jazeera offices. Other reasons for the cooling in bilateral relations concerns Amman’s position on the war in Yemen — Jordan’s participation in the Saudi-led coalition was symbolic and short-lived — and courting of the Muslim Brotherhood, which has representation in the Jordanian parliament.

Jordan is keen to avoid being seen as joining regional blocs or coalitions. Despite Amman's historically close relations with the Gulf states, especially Saudi Arabia, Abdullah has always followed an independent policy that shuns polarization. This is demonstrated in Amman maintaining low-key diplomatic relations with Tehran, despite its rejection of Iran’s controversial role in Syria, Iraq and Yemen. Abdullah was the first Arab leader to warn of a Shiite crescent, going back to 2004.

Given Abdullah's approach to foreign policy, Jordan’s growing closeness to Turkey, which has sided with Qatar in the Gulf dispute, will be carefully managed. The two sides have shared interests in the outcome of the Syrian crisis, and they both back Palestinian rights and the two-state solution. Turkey’s strong support for the Hashemite's role in East Jerusalem is of important moral value.

Yet according to Jordanian political analyst Amer al-Sabaileh, both Jordan and Turkey are affected by “the damaging US regional policies.” In this regard, he told Al-Monitor, “[For] Jordan, it is the peace process and Trump’s derailing of the two-state solution, and for Turkey, it is the US backing of Syria’s Kurds and the uncertainty over the latest Turkish incursion into northern Syria.”

In addition to deeper political coordination, Jordan, which has suffered economically as a result of the crises in Syria and Iraq in the past few years, stands to benefit from better commercial ties with Turkey. Former Jordanian Deputy Prime Minister Jawad Anani told Al-Monitor that the Turkish economy is around the 15th largest, and Turkey's political and economic standing in the region is beyond dispute.

“The boosting of ties comes at a crucial time for Jordan, since Turkey represents a huge market for Jordanian goods, as well as a source of incoming tourists,” Anani said. “After Cavusoglu’s visit, Turkey exempted over 500 Jordanian goods from customs duties, which is a major opportunity for local industries.” He added that Turkish products and TV dramas are popular in Jordan, and Turkey is the No. 1 tourist destination for Jordanians.

Erdogan, however, remains a contentious figure among Jordanians. Many admire him for standing up to Israel and the United States, and for dialing back Turkey’s secular culture, but others view him as a demagogue and a political opportunist. Ironically, Abdullah’s view of Erdogan has not always been positive. In April 2003, The Atlantic reported the king as perceiving the then-Turkish prime minister as “merely promoting a softer-edged version of Islamism” and saying that Erdogan had told him that democracy is like “a bus ride” — “Once I get to my stop, I’m getting off.” Since that time, the two leaders appear to have realized that they are better off working together to offset common challenges in their troubled region.