Though attacks from across the border with Syria and Iraq are becoming less of a concern, experts say that the political, economic and cultural conditions in Jordan are perfect for home-grown extremism, a risk the government seems reluctant to address. 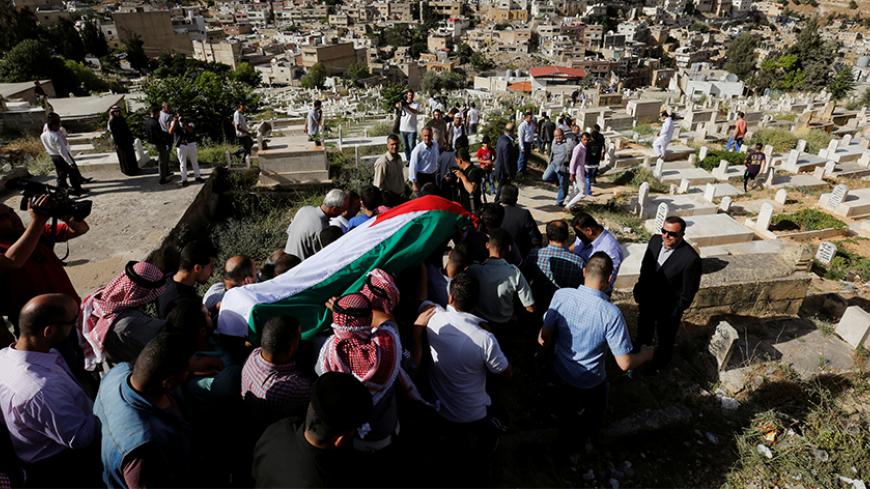 Jordanian soldiers and relatives of one of the intelligence officers killed in the attack on a security office in Baqaa carry his body during his funeral in the city of Al Salt, Jordan, June 6, 2016. - REUTERS/Muhammad Hamed

The deadly attack on an intelligence facility near Baqaa Palestinian refugee camp June 6, which claimed the lives of five people, including three officers, was heavily symbolic. The General Intelligence Department (GID), north of Amman, is Jordan’s most prestigious national security apparatus. It is in the forefront of the war against jihadis and other militants. It had been effective in preventing terrorist attacks against government and civilian targets. Its last such operation was in March, when special forces took down what was described as an Islamic State (IS) cell in the northern city of Irbid. All the cell members were Jordanians.

Until the general prosecutor issued a ban on publication of news on the attack last week, the government had released some information about the single assailant — who was caught on the same day with the help of citizens — and his motives. Government spokesman Mohammad al-Momani told the official Jordanian news agency that the gunman was a Jordanian citizen and a resident of the nearby camp. Mahmoud al-Masharfeh, of Palestinian origin, was a jihadi sympathizer last arrested in 2014 when he tried to enter Gaza to join Jaish al-Islam, a branch of al-Qaeda. Momani told reporters, “Early indications are that this was an isolated act.”

During a visit to the GID headquarters June 7, King Abdullah reiterated his confidence in the military and security agencies, commending their role in defending the country and safeguarding its security and stability.

But the attack shifted attention to Jordan’s problem with home-grown radicalism. There are conflicting reports about the number of Jordanians who had crossed the border with Syria and joined al-Qaeda proxy Jabhat al-Nusra and IS. According to the figures compiled by the International Centre for the Study of Radicalization and Political Violence in 2015, an estimated 1,500 Jordanian citizens are fighting in Syria and Iraq. One study by Radio Free Europe suggested that Jordan’s ratio of jihadis to general population is 315 per million, making it the top contributor of foreign fighters to Iraq and Syria per capita.

The majority of these fighters belong to the Salafi-jihadi movement in Jordan, estimated at 5,000 members. Most are from economically marginalized towns such as Zarqa, Maan and Irbid.

The Baqaa attack has raised fears of sleeper cells or lone wolves who may have indirect contacts with IS or Jabhat al-Nusra. An unknown number of Jordanian jihadis have managed to return from Syria and many have been charged and tried before the country’s State Security Court.

The problem of home-grown radicals has reignited a national debate following the Baqaa incident. In February 2015, Prime Minister Abdullah Ensour reiterated a commitment to a national plan the government adopted in 2014 to confront extremism that focuses on all sectors, including education and rehabilitation of mosque preachers. Ensour said, “Difficult economic conditions and the spread of poverty and unemployment in addition to political conditions have contributed to extremism and terrorism.” But since then, there has been no indication that such a plan was being implemented or that it is achieving results.

On June 12, Al-Ghad newspaper reported that a US State Department report on terrorism had criticized Ensour’s plan, claiming that it lacks resources and manpower. The report also said that Jordanian officials are reluctant when pushed to acknowledge the phenomenon of local extremism.

Mohammad Abu Rumman, a researcher at the Center for Strategic Studies at the University of Jordan and an expert on jihadi movements, said that while the state is successful in battling extremists on the security front, it has failed politically and culturally in protecting Jordanian young people against extremist ideologies. He told Al-Monitor that the government strategy was “born dead” and that “we know little about efforts to rehabilitate and reform prisoners.” He said that the Baqaa assailant had been indoctrinated while he was in prison for two years.

Abu Rumman said he is puzzled by Jordanian young people who are inspired by the discourse presented by radical groups while at the same time distrusting the official religious line or the thinking of moderate groups. “We need to build psychological profiles of these young men to understand what drives them,” he said. “The danger is growing and we should be worried that IS is now appealing to middle-class youth as well,” Abu Rumman added.

Moderate Islamist activist and newspaper columnist Hilmi al-Asmar said it is not enough to review the official religious discourse and the content of Friday sermons to fight extremist ideas, explaining, “We need a surgical intervention to overhaul school curricula, and this is not easy because there are legitimate questions about jihad in Islam that require modern-day answers that will be acceptable to the majority.”

In his view, the best strategy should seek to “instill the values of a civil state, equal rights before the law and an encompassing identity that confronts auxiliary identities that have fragmented our society.”

Jordanian officials and pundits were quick to reject insinuations that the Baqaa attacker's actions were linked to his Palestinian origin. Abu Rumman said that the Salafi-jihadi movement appeals to a mixed group of Jordanians. Ensour may be right in pointing the finger at the economic conditions that Jordan is dealing with, made even worse by the presence of at least 1.2 million Syrians in the kingdom.

But salvaging the economy will take a long time and recent figures show that the unemployment rate, especially among young people, is rising, reaching as high as 13%, the highest since 2008. While fears of attacks from across the border with Syria and Iraq are receding, experts such as Abu Rumman say that local conditions are providing a rich habitat for home-grown extremism.