Jordan on high alert for possible IS retaliation

Jordanians are worried the Islamic State will conduct terror attacks in response to the kingdom’s participation in the US-led coalition that is targeting the group in Syria. 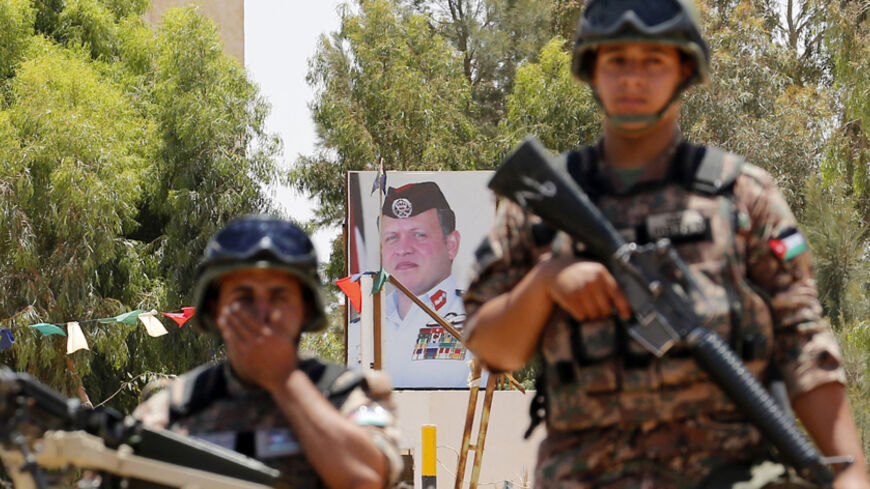 Jordanian soldiers stand guard in front of a poster for Jordan's King Abdullah near the Jordanian Karameh border crossing on the Jordanian-Iraqi border, June 25, 2014. - REUTERS/Muhammad Hamed

Many rumors are circulating in Amman about alleged terror threats to shopping malls and other public places in response to news that the kingdom’s air force has joined the US-led coalition in targeting Islamic State (IS) positions in Syria. No more is that evident than in posh west Amman with residents exchanging — mostly on social media — unconfirmed reports of emergency evacuation of shopping centers. The big question on everyone’s mind is how will IS retaliate against Jordan’s direct involvement in a growing regional and international coalition to degrade and destroy it. The Public Security Department (PSD) had to issue clarifications refuting rumors about potential terrorist threats. But government sources confirmed to Al-Monitor that a state of high alert has been declared affecting the armed forces and the PSD. Travelers to the southern port city of Aqaba, 350 kilometers (217 miles) from Amman, talked about multiple security checkpoints along the highway.

Jordanians are right to worry about possible reprisals. In November 2005, three Amman hotels were rattled by suicide attacks that left 60 people dead and more than 100 injured. The attacks were carried out by the al-Qaeda affiliate in Iraq led by Jordanian Abu Musab Zarqawi, who was later assassinated by the CIA. The memory of the Amman bombings is still fresh in many people’s minds.

IS and al-Qaeda-affiliate Jabhat al-Nusra have threatened to retaliate against the United States and Arab countries that joined the coalition, including Jordan. US Gen. Martin Dempsey, chairman of the Joint Chiefs of Staff, was quoted as saying that IS “will certainly threaten Lebanon in the near term, … Jordan in the mid term.”

Jordan has common borders with both Iraq and Syria; two countries where IS has been active and is in control of large swaths of land. In justifying the latest airstrikes by the royal air force, Jordan's armed forces said on Sept. 23 that it had thwarted a number of attempts to infiltrate the borders by terrorists. King Abdullah had reiterated Jordan’s commitment to fighting terrorism on Sept. 24, and participated in NATO’s summit in Wales on Sept. 4 and in the special UN Security Council session chaired by US President Barack Obama on the same day. After the initial denial that Jordan was about to join the anti-IS coalition, it was clear that the kingdom has become an active player along with four other Arab countries.

But the issue remains a controversial one for many Jordanians. The Muslim Brotherhood, the country’s most prominent opposition group, rejected Jordan’s participation in a US-led alliance to bomb IS. It failed to condemn the group’s atrocities and only warned against its “excessiveness and extremism.” A number of parliamentarians signed a petition on Sept. 3 calling on the government not to get involved in “a war that isn’t ours.”

Experts estimate the number of Jordanian jihadists fighting in Syria with Jabhat al-Nusra and IS at 1,800-2,000. But the spokesman for the Salafist jihadist movement in Jordan, Mohammad al-Shalabi, better known as Abu Sayyaf, told Al-Monitor that the number of Jordanian jihadists in Syria could be as high as 8,000. The PSD and the General Intelligence Directorate (GID) have intensified efforts to monitor and arrest Salafist jihadist sympathizers and activists. On Sept. 21, Jordan announced that it had arrested 11 IS members who had confessed to plans to carry out terrorist attacks in the kingdom. A lawyer for Islamists in Jordan, Mussa al-Abdallat, told Al-Monitor that the number had reached 90 by Sept. 28.

And on Sept. 25, the US and French embassies in Jordan issued advisories to their citizens in Jordan to be on the alert. The French Embassy warned nationals to avoid visiting Amman shopping malls or the governorates of Ma’an, Tafileh, Zeraq and Irbid. On the other hand, Amman residents were particularly alarmed by the quick and previously unannounced installment of warning sirens in various parts of the capital. The municipality and the Public Defense Directorate took their time before they explained that these sirens will be used to warn against “emergency incidents, especially extraordinary weather conditions.”

The announcement that Jordan’s air force had carried out airstrikes against IS positions in Syria coincided with the not-guilty verdict by the State Security Court on Sept. 24 against fiery Islamist preacher and architect of Salafist jihadist dogma Abu Qatada, who was being tried on terror charges. The verdict raised eyebrows for its timing and the gravity of the charges leveled against the man who was extradited by Britain a little over a year ago. On June 17, the spiritual leader of the Salafist jihadist movement, Abu Mohammad al-Maqdisi, was also released from jail. Both had condemned IS and its tactics, but the latter appeared to change his position once the US-led coalition began targeting IS. On Sept. 24, Maqdisi issued a statement describing Arab armies that participated in the Syria bombing as “apostates.” Nevertheless, it is believed that the two men’s release is an example of how the GID is trying to divide the Salafist jihadist movement in Jordan.

Abu Sayyaf has dismissed local worries about possible reprisals by IS. He told Al-Monitor, “Jordan’s role in the alliance remains vague.” He added that from his “deep knowledge of people associated with Daesh [the Arabic acronym for IS] they have no interest in antagonizing Jordan at this stage.” On the other hand, former Chief of the Royal Court Adnan Abu Odeh told Al-Monitor, “Jordan should take precautions against possible terror attacks by IS since the kingdom is always a target, whether it joined the international alliance or not.”

Opponents of Jordan’s role in the US-led coalition, like member of the Lower House Khalil Atiyeh, opine that the kingdom should not get involved in “America’s wars.” Atiyeh told Al-Monitor, “The only beneficiaries from this military campaign will be Israel and the Kurds, and that this precedent [of Jordan carrying out airstrikes in Syria] will allow others to interfere in Jordan’s affairs in the future.” Others like General-Secretary of the Islamic Action Front (IAF) Mohammad al-Zyoud told Al-Monitor, “Jordan’s involvement will pave the way for a new US colonization of the region.”

In the midst of mixed expressions of worry and patriotism, one political commentator, who did not wish to be named, told Al-Monitor that it was still possible to see a repeat of the 2005 Amman bombings. He said that the biggest concern for the authorities is not that IS could attack from the outside, but that “a lone Islamist radical, who could be part of a sleeping cell, would carry out a suicide mission in retaliation.” That, he added, would change everything.