Jordan hopes to make up for lost time as a key border crossing with Syria reopens for the first time since the Syrian civil war erupted in 2011. 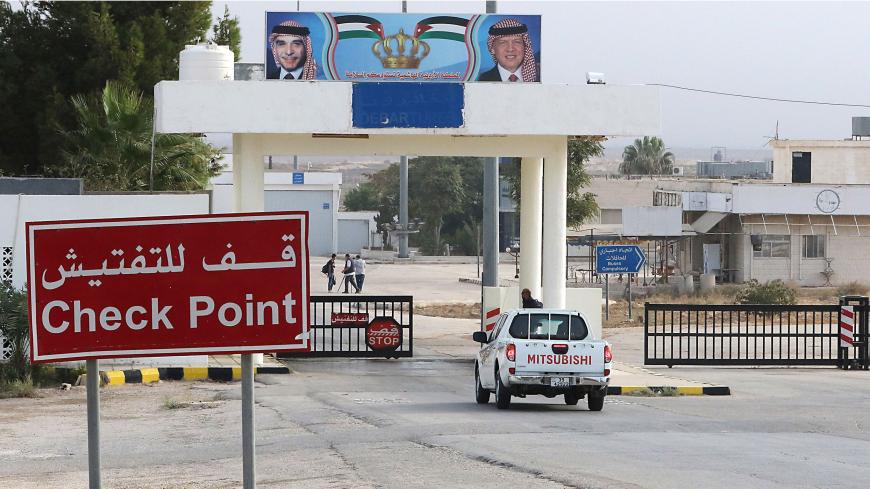 A vehicle arrives at the Jaber/Nassib border crossing between Jordan and Syria in the Jordanian Mafraq governorate on the day of its reopening on Oct. 15, 2018. - KHALIL MAZRAAWI/AFP/Getty Images

Jordan and Syria reopened a major border crossing on Oct. 15 after more than a month of bilateral technical talks. The Jaber/Nassib border crossing had been closed for the past three years since rebels took control of the Syrian side in April 2015. Jordan insisted that it would open the border point only when the Syrian government regained control, which it did in July.

The crossing is a vital commercial artery not only for the two countries' bilateral trade, estimated at $750 million in 2010, but for the whole region. Since 2011, Syria’s losses from the border closure were estimated at $5 billion, while the kingdom lost $800 million and Lebanon $900 million.

Until the closure, goods worth $2 billion had passed through the crossing annually. For Jordan, Syria is the gateway to Lebanese, Turkish and European markets, while goods coming from Syria, Lebanon and Turkey must pass through Jordan to reach the lucrative Gulf markets. Lebanese President Michel Aoun welcomed the reopening of the crossing on Oct. 15, saying that it will restore Lebanon’s connection to Arab countries.

The border will be open for passengers and freight but it is not likely to see much heavy traffic yet. President of Jordan’s Truck Owners Association Mohammad al-Dawood was quoted on Oct. 15 by the official Petra news agency as saying that 5,000 Jordanian trucks are ready to transport freight between the two countries and beyond, but only 1,200 trucks will be deployed immediately. Dawood said he expects Jordan to export essential goods needed by Syria and Jordanian trucks will now be able to reach Mediterranean ports. He added that Jordan also stands to benefit from reconstruction projects in Syria once they begin.

Aside from revitalizing the land transportion sector in Jordan, which had lost more than $1.5 billion in the past five years according to Dawood, the reopening of the borders is expected to create jobs in northern Jordan as customs clearance companies resume activities and revive the now idle Jordan-Syria Industrial Free Zone.

Both governments have focused on the economic benefits of reopening the border and avoided making political statements. But Ammon quoted the Syrian charge d'affaires in Amman, Ayman Alloush, Oct. 15 as saying the opening of the borders is one step that will be followed by others toward restoring relations to their normal level.

A Syrian trade delegation visited the Jordanian border on the day of the opening and met with Jordanian businessmen to discuss boosting bilateral trade and ways to facilitate overland freight movement to Gulf and European markets, according to a report by the Amman-based al-Mamlaka TV. It quoted the president of the Syrian Exporters Union, Mohammad al-Halak, as saying the meeting aimed to create partnerships for the future reconstruction of Syria. Both sides avoided mention of the tenuous political climate between Amman and Damascus since the eruption of the Syrian uprising in 2011.

Jordan’s major concern during the technical negotiations was security, while the Syrian side wanted the opening of borders to mark the return of normal ties between the two countries. For now, it appears that both sides are satisfied. Amman had insisted that only Syrians with security clearance and valid visas would be allowed into the kingdom. Jordanians, on the other hand, do not require visas for Syria.

Local observers believe that Russia had played a vital role in pushing the two sides to reach an agreement. For Syria, the reopening of the border enhances its claims of winning the civil war and recapturing most of its territory. For Jordan, the opening of the border should help its sagging economy, which had suffered as a result of regional crises and the closure of borders with both Iraq and Syria.

But economic gains will not come quickly. For one, Turkey’s borders with Syria remain closed and Jordanian trucks will not reach European markets through Turkish territory anytime soon. Moreover, diplomatic ties between Damascus and most Gulf countries are either low-key or non-existent, and that means that Syria will not be able to export goods to these markets.

Apart from the economic benefits, Jordan hopes that reopening the borders will encourage the Syrian refugees that the kingdom hosts, numbering over 600,000, to choose to return voluntarily. By October last year, Jordanian authorities estimated the cost of hosting Syrian refugees at more than $10 billion since the civil war broke out in 2011.

A spokesman for the United Nations High Commission for Refugees in Jordan told Asharq al-Awsat newspaper Oct. 16 that the agency will begin registering refugees wishing to return to Syria and coordinate with the Jordanian authorities.

There is little doubt that as economic relations improve between Jordan and Syria, so will political ties. But a total thaw will take time. Amman is in no hurry to normalize relations as it tests shifting regional currents. For now, economic deals will do just fine.