When will Jordan-Syria border crossing reopen?

Since the Syrian regime has taken control of southern Syria, including the Nassib border crossing, hopes to resume trade and boost the economy between Jordan and Syria have been revived. 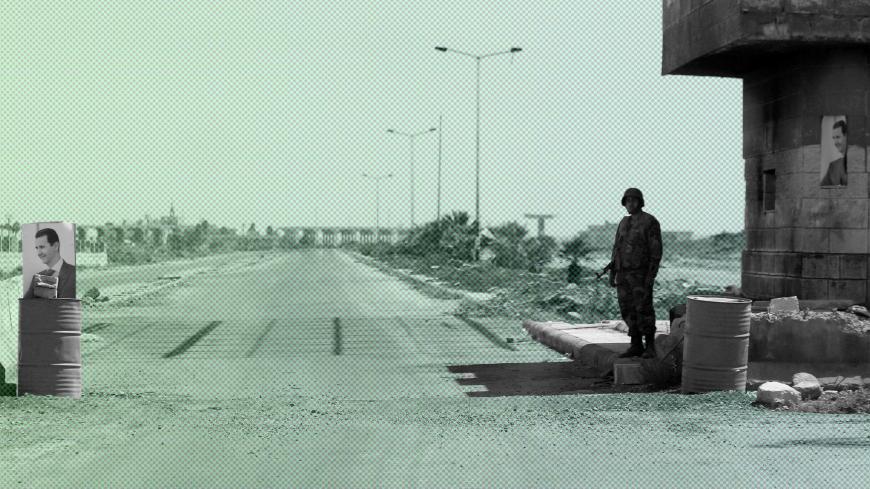 Jordanian businessmen in the private sector are currently working to break the ice between Amman and Damascus to reopen the two border crossings, namely the Nassib and Ramtha crossings, which the Jordanian side officially closed in 2015 after Free Syrian Army (FSA) factions took control of them on the Syrian side.

“This participation is aimed at re-establishing the bridges that were cut off with Syria because of the closure of the border. We will discuss the strategy for future action in rebuilding Syria when calm is reinstated in Syria and reconstruction begins. This is why both countries need to be coordinating, so as Jordan can provide Syria with reconstruction material and logistic support,” Kabariti noted.

The Nassib border crossing, where trade has been suspended since 2011 due to security conditions after serving as a vital line between Syria and Jordan, can only reopen if one of the two countries compromises and asks for it, Jordanian and Syrian officials said. Amman and Damascus are both waiting for the other party to request the opening of the crossing.

In April 2015, Jordanian authorities officially announced the closure of the crossing after FSA factions, namely Fallujah of Horan Brigade, Yarmouk Army, the Lions of Sunna Brigade and the Artillery Corps, took over the area. Then-Jordanian Interior Minister Hussein al-Majali justified the closure of the crossing as “being the result of the violent incidents on the Syrian side of the border.”

On Aug. 28, the Jordanian government contacted the customs clearance companies to get ready to resume work as soon as the crossing reopens in coordination with Syrian authorities.

Meanwhile, the head of the Agricultural Materials Traders & Producers Association of Jordan, Khalil al-Haj Toufic, told Al-Monitor that a group of Jordanian businessmen in the private sector are expected to head to Syria on Sept. 4 to meet with Syrian businessmen and discuss ways to resume economic trade between the two sides.

It seems, however, the opening remains stalled for political reasons. Jordan would only reopen the crossing if the Syrian side officially puts in a request for it. Jordanian Minister of State for Media Affairs and Communications and government spokesperson Jumana Ghunaimat told Al-Monitor, “The Syrian side has not yet requested the opening of the crossings.”

“The Nassib border crossing remains closed. Jordan is ready to open the borders, but Syria has yet to ask for that,” she added.

Meanwhile, Syria also holds on to the same demand. Syrian Transport Minister Ali Hammoud told Reuters Aug. 6 that the Damascus-Amman International Road in Syria is ready to function, but the Syrian government had yet to receive any request from Jordan to reopen the crossing.

The closure of the crossing caused financial losses for the two countries. Trade volume between the two reached $750 million in 2010 but has fallen to zero since 2011, said Abdelsalam Thiabat, president of the Ramtha Chamber of Commerce.

According to the Amman Chamber of Industry, Jordan imports textiles, clothing, animal and vegetable products from Syria, while the kingdom exports to Syria chemical products, agricultural products, plant products, machinery and electrical appliances.

Toufic said that trade between the two countries continued through the ports of Aqaba and Latakia, especially since some Syrian materials are irreplaceable, such as spices, jams and some legumes — but the tariff has risen on them by 10%.

“It would bode well for both countries if the crossing reopens. We suffered great losses after Syrian goods stopped entering Jordan in 2011. We also stopped exporting to Europe, and the movement of commercial trucks between the two countries completely stopped,” Thiabat told Al-Monitor.

The Ramtha and Irbid provinces are known for selling Syrian goods, especially clothing, cotton and foodstuffs. But their supply stopped, causing a decline in commercial activity. Data by the Ramtha Chamber of Commerce indicate that 70% of trade there relied on Syrian products.

Economist Mazin Marji believes that “Nassib/Jaber crossing is of great importance to both Jordan and Syria. It shortens distances and opens all of Europe to Jordanian goods, the Gulf and West Asia to Syria, and thus allows Lebanon and Turkey to benefit from the goods and passenger movement as well.”

Marji told Al-Monitor, “In some years, the crossing made $1 billion in revenues for both countries.” He expects this mutual benefit to push both countries to overcome their political differences.

Jordanian Foreign Ministry spokesman Mohammad al-Kayed told Al-Monitor that “the reopening of the crossing is in the hands of the Jordanian Interior Ministry.”