Jordan reopened the Naseeb-Jaber crossing with Syria to restore trade movement, although some do not see any economic benefits for the Syrian government. 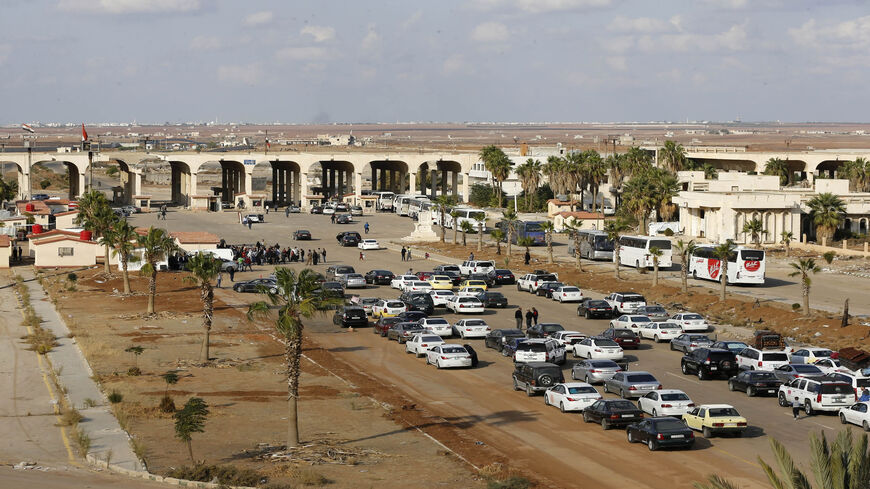 Vehicles wait to cross into Syria at the recently reopened Naseeb border post in Daraa province, at the Syrian-Jordanian border south of Damascus, Nov. 7, 2018. - Louai Beshara/AFP via Getty Images

Ever since the Syrian government took control of the southern regions in Syria, which include the province of Daraa and Quneitra, it has conducted several meetings with the Jordanian side to reactivate the trade activity across the border. These meetings reached a fundamental step in October 2018 with the reopening of the Naseeb-Jaber border crossing, only to be closed again in mid-August 2020 due to the outbreak of the coronavirus pandemic.

On April 17, Jordan reopened the Naseeb-Jaber crossing with Syria to restore commercial and individual movement based on the recommendations of the Jordanian Field and Border Crossings Committee. This came after an agreement was concluded between the Syrian and Jordanian sides during the visit of the chairman of Jordan’s Chamber of Commerce, Nael al-Kabariti, to Damascus on April 3. Soon after the crossing’s reopening, the Jordanian Minister of Interior, Brig. Gen. Mazen al-Faraya, sent a letter to the director of Jordan’s Public Security asking him to facilitate the movement of passengers and trucks across the land borders with Syria while respecting the health protocol.

An employee at the free zone of the Naseeb-Jaber crossing living in Daraa city told Al-Monitor on condition of anonymity, “Ever since the free zone was closed in late 2015 — when the Syrian opposition took control of the entire border area in southern Syria — we have been consistently receiving our salaries [from the Syrian government-affiliated General Organization for Free Zones]."

He added, "Recently we were informed that we could return to work in the near future, as the Syrian side has taken all necessary measures and is awaiting the approval of the Jordanian side to resume work. The moves to open the market with Jordan come as the economic crisis in Syria is deteriorating due to the sanctions imposed on the Syrian regime. The moves also aim at reducing some costs and the prices of various goods and consumables, including clothing, vegetables, fruits and sweets.”

Morshed al-Nayef, a Turkey-based freelance economic expert who writes for several Arab newspapers, told Al-Monitor, “By opening the border crossings, Jordan is seeking to have an economic outlet that would compensate for the repercussions of the coronavirus pandemic on the Jordanian economy. This is why Amman restored economic relations with the Syrian regime after Jordan’s exports to Syria declined from $255 million in 2011 to $74 million in 2019, while imports decreased from $376 to $43 million [according to figures by the Jordanian Department of Statistics]."

He said, "This shows the extent to which the Jordanian economy was affected by the closure of the border crossing with Syria. The border city of Ramtha was also affected by the closure of the Naseeb-Jaber crossing, as the number of shops relying on the crossing in the city decreased from 5,000 to 500. What’s more, 1,100 public transport vehicles and 7,000 trucks that were operating between Syria and Jordan ceased to work.”

Nayef added, “The opening of the crossing will grease the wheel of the Jordanian economy and will positively affect the trade movement. For Syria, the advantages of this step will be limited due to the currently weak productivity. Consequently the Syrian market cannot export large quantities to the Jordanian market, so I do not expect Washington to react violently to this step. Jordan cannot serve as an economic lever capable of pulling the regime out of the economic crisis it is experiencing. These commercial operations are limited to certain sectors that will benefit Jordan alone and that are not of strategic importance.”

Despite Jordanian government statements that the closure of the crossing in mid-August 2020 was part of its plan to stem the spread of the coronavirus, the land crossings with Saudi Arabia and Iraq were reopened for transport and travelers, with the exception of the Jaber crossing. It was subsequently revealed that a meeting was held between the Jordanian authorities in late November 2020 and the commander of the Eighth Brigade of the Russian-backed Fifth Corps of the Syrian army, Ahmed al-Awda. During the meeting, Jordan conveyed through Awda a message to the Russian and Syrian sides whereby the crossing will not be opened so long as the Shiite militias affiliated with Iran and Hezbollah have not withdrawn 50 kilometers (31 miles) toward the Syrian interior.

Malik Abu Obeida, a journalist for the Halab Today TV satellite channel who hails from the city of Daraa and resides in the northern countryside of Aleppo, told Al-Monitor, “The Jordanian government never supported the Syrian people or the Syrian revolution. On the contrary, it was waiting for a chance for the Syrian regime to restore its control over the [southern] region to normalize relations with it, and this is the reason behind the official rather than economic reopening of the crossing."

He noted, "The crossing was never [fully] shut down, but only a few cars were passing through it amid wide smuggling operations. The Jordanian government has seized large quantities of drugs recently, smuggled by the Iranian militias controlling the region. These have blended into the ranks of the Syrian regime forces and raised its flag in response to Jordan’s demand for the withdrawal of militias in order to open the crossing. This infers that those militias have not withdrawn.”

Abdul Hakim Masri, minister of economy and finance at the Syrian opposition's self-styled interim government, told Al-Monitor, “The motive behind the reopening of the Jaber crossing for the Syrian regime is motivated by media reasons rather than economic or political concerns in the lead up to the Syrian presidential elections.”

He believes the move aims to portray the Syrian government as seeking to solve the economic crisis it is going through and consolidate its relations with the countries of the region.

He said, “Meanwhile, the Jordanian government does not want to lose the United States, Europe and Qatar at the expense of normalization with the Syrian regime. Although the regime believes that the crossing can alleviate the economic crisis, this will not materialize because the regime cannot import goods from abroad amid a shortage of greenback and a decline in the exchange rate of the Syrian pound against the dollar. Moreover, the regime cannot export goods because of lack of domestic productivity.”

“And finally, opening the crossing is a violation of the Caesar Act,” Masri said, explaining that working to restore economic ties with Syrian commercial companies that have been sanctioned is a breach of the US act, and could subject Jordan or Jordanian companies to sanctions as well.