Palestinian leaders have expressed happiness that their concerns were addressed at the Arab League summit, though the annual meeting has done little to convince the world of Arab resolve on any one issue. 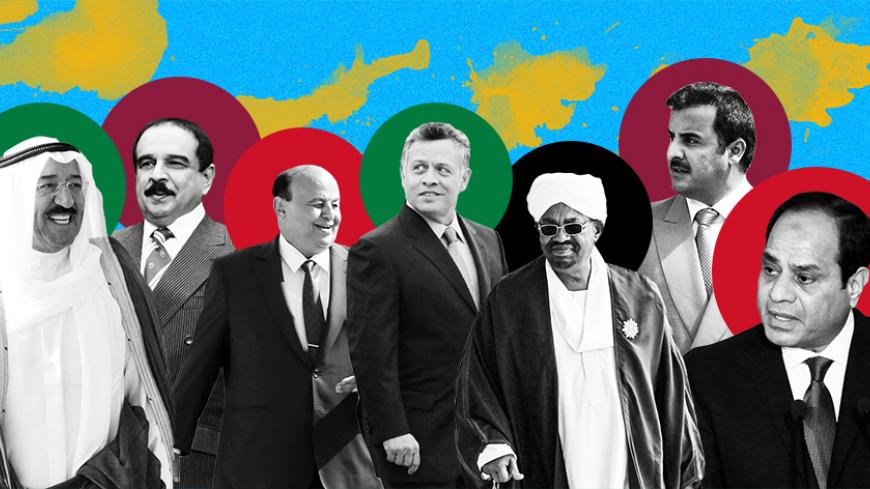 Top of the agenda for Arab heads of state is the conflict in Palestine. - Hugo Goodridge/Al-Monitor

Meeting just a few kilometers from the occupied Palestinian lands on March 29, Arab leaders brought the Palestinian conflict back to the top of their agenda.

The 28th Arab League Summit, held on the Jordanian side of the Dead Sea with King Abdullah presiding, set the stage for the upcoming April Washington visits by three Arab leaders.

Egypt's Abdel Fattah al-Sisi will visit the White House early on April 3, and Abdullah’s visit has been set for April 5. Palestinian President Mahmoud Abbas' visit has yet to be scheduled.

Typically, Arab summits are long on public speeches and short on closed meetings, and this year's summit was no exception. However, with all the internal violence in the Arab world, the presence of 16 Arab leaders at the summit is seen by many as a success and will lend Abdullah as host additional strength in pursuing Arab goals. The 27th Arab Summit held in Mauritania's capital Nowak Shod in July 2016 was attended by only five Arab heads of state.

Palestinian leaders expressed happiness that their main concerns were addressed in the final communique prepared largely in advance by foreign ministers. It stated, “First, we reiterate our continuous effort to relaunch serious and effective Palestinian-Israeli peace negotiations that can end the political deadlock and that can move with a clearly stated timeline to end the conflict on the basis of two states, ensuring the creation of an independent Palestinian state on the June 4, 1967, borders with East Jerusalem as its capital. This is the only way to reach peace and stability.”

Ziad Khalil Abu Zayyad, Fatah's spokesman for international affairs, told Al-Monitor that the results of the summit were comforting for Palestinians. "In the final communique, Arab leaders reiterated total support for an independent Palestinian state with Jerusalem as its capital, opposed settlements and Israel's attempts to Judaize Jerusalem, and called on the world community not to think of moving their embassies to Jerusalem, while also repeating their support for the 2002 Beirut summit Arab Peace Initiative."

Khaled Hroub, a political science professor at Northeastern University in Qatar, told Al-Monitor in an email that the situation was looking bad a few months ago. "Palestinians got out of this one with the least number of casualties," he said. "Many had expected that Arab leaders would make substantial compromises to the Arab Peace Initiative, but in the end they stuck to it without any changes," he said.

Hroub pointed to the storm that erupted March 17 following the issuance of a United Nations report accusing Israel of apartheid, a war crime, saying that it contributed to the Arab resolve. "When Rima Khalaf, the secretary-general of the UN Economic and Social Commission for Western Asia, resigned rather than succumb to pressures from the UN secretary-general to withdraw her report, she became a folk hero in the Arab world and made it difficult for any Arab leader to show signs of weakness."

There has not been much excitement in the streets of the Gaza Strip, however. This apathy was reflected in social media posts throughout the Arab world. Photos of Arab leaders dozing off during the conference's public sessions went viral, complete with disparaging comments about the aging Arab leaders.

The yearly Arab summit has become a platform for leaders to show their people that they are still committed to Arab causes. It has done little to convince the world of Arab resolve on any one issue, while Arab leaders have been unable to stop the civil wars in Syria, Iraq, Libya and Yemen. Palestine seems to be the only rallying point for which all are willing to provide lip service. Palestinian leaders are hoping that with the public pronouncement so clear, Arab leaders meeting the US president will stay on course and not allow the United States to ignore Palestinian national aspirations.