The Saudi king declared the April 15 Arab League Summit held in the city of Dhahran in eastern Saudi Arabia to be the "Jerusalem Summit," yet many Palestinians doubt this show of support will lead to lasting change. 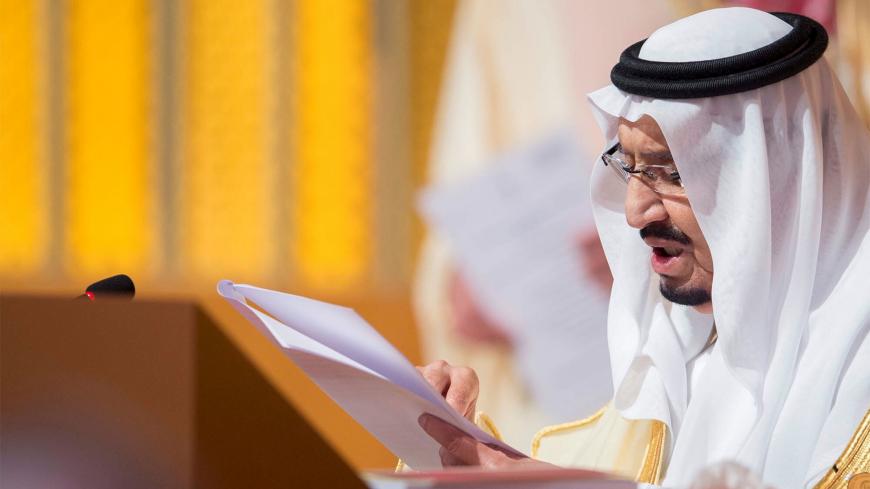 When the Saudi leadership decided to move the annual Arab League Summit from the Saudi capital of Riyadh to the eastern Saudi city of Dhahran, it appeared that the April 15 summit would be called by the name of the city it was being held in, or at least another city within the kingdom. The last summit, held on the shores of the Dead Sea in Jordan in March 2017, was called the Amman Summit.

But midway through the public opening statements and as he was introducing Palestinian President Mahmoud Abbas, Saudi King Salman bin Abdul-Aziz Al Saud announced a change. “This summit will be called the Jerusalem Summit," the king told the 15 other heads of state and six other representatives of the Arab League.

He also announced a number of donations, including $150 million for the maintenance of the Islamic endowment in Jerusalem and $50 million to help cover the annual budget of the United Nations Relief and Works Agency (UNRWA) for Palestinian refugees after the United States cut its aid to the agency earlier this year.

The United States had suspended in January 2018 a $65 million portion of its aid to UNRWA in protest of the Palestinian government’s boycott of US officials following Donald Trump’s declaration on Jerusalem.

It is not clear exactly what made the Saudi monarch decide to raise the profile of Jerusalem. The king’s son, Crown Prince Mohammed bin Salman — who is also the kingdom’s defense minister — had just concluded a wide-ranging tour in the United States between March 19-22 that included a visit to the White House.

Throughout his tour, Mohammed made little mention of Jerusalem. In fact, in one interview with The Atlantic, he appeared to be moving closer than ever before to unilaterally recognizing the state of Israel in an exchange that drew a striking headline.

The Atlantic’s editor-in-chief, Jeffrey Goldberg, asked, “Do you believe the Jewish people have a right to a nation-state in at least part of their ancestral homeland?” Mohammed answered, “I believe that each people, anywhere, have a right to live in their peaceful nation. I believe the Palestinians and the Israelis have the right to have their own land.”

But The Atlantic’s April 2 version of the interview played up the statement by removing reference to Palestinians, with the subhead, “In a wide-ranging conversation, Prince Mohammed bin Salman also recognized the Jewish people’s right to ‘their own land.’”

Hussein al-Sheikh, who was a member of the Palestinian delegation to the Arab Summit, told Al-Monitor that the issue of Jerusalem is always a priority for Arabs; therefore, the change of the name is not out of the ordinary for the Saudi monarch.

Hanna Issa, secretary-general of the Islamic Christian Commission in support of Jerusalem and the holy sites, told Al-Monitor that the decision by the Saudi monarch came as a direct result of a Palestinian request. “President Mahmoud Abbas personally made the request from King Salman in order to make it clear to everyone that Arabs are united in their support for the Palestinian position on Jerusalem,” he said.

The Arab Summit’s final communique April 2 also echoed the same theme of support for the Palestinian position. “We affirm the illegality of the American decision to recognize Jerusalem as the capital of Israel, as we categorically refuse to recognize Jerusalem (Al-Quds) as the capital of Israel, where East Al-Quds will remain the capital State of Palestine. We warn against taking any action that would change the current legal and political status of Al-Quds,” the communique read.

Yet, a number of individuals and local leaders in Jerusalem were skeptical about the name change, the donation and the clear Arab position on Jerusalem in the final communique. Khaleel Assali, editor of the East Jerusalem-centric website Akhbar al-Balad, told Al-Monitor, “Jerusalem has become a word that everyone uses to show patriotism. We have heard so much of these words in the past and also millions have been committed in previous summits for Jerusalem, but we have not seen on the ground any changes as a result of these so-called donations.”

On the Akhbar al-Balad website, an unsigned report and undated editorial about the Saudi donation at the Arab Summit said Jerusalemites welcomed the generous gift but expressed skepticism as to whether it will differ from earlier pledges. The article stated, “We estimate that about $3 billion has been pledged to Jerusalem as a total of what has been publicly stated in previous summits, yet only tens of millions have actually reached Jerusalem — and even these amounts were not seen as having made any change in the city.”

A report on Al-Jazeera's website April 18 asked whether the Saudis are planning to channel this aid via Jordan or if they have other plans. Akhbar al-Balad, in the aforementioned editorial, also asked whether or not the money will be channeled by way of the Jordanian Waqf. Meanwhile, Issa assured Al-Monitor that the money will be transferred to the Jordanian Waqf to be spent in Jerusalem.

The name change, the donation and the communique certainly were welcomed by Palestinians and their supporters, thus cutting off the potential of Washington trying to keep East Jerusalem away from any “ultimate deal” that the White House is trying to produce.

Many Palestinians hope that this strong Arab support for Jerusalem will close off any chance that the United States will try to take the holy city “off the table,” a reference to what Trump had boasted about. But having seen this charade before, few if any are confident that this Arab position will not erode and compromises on this essential Arab demand will not be made.