The chaos surrounding the issue of properties in Jerusalem point to a larger problem, namely the absence of a unified solid political leadership that can guide the city’s 330,000 Palestinians. 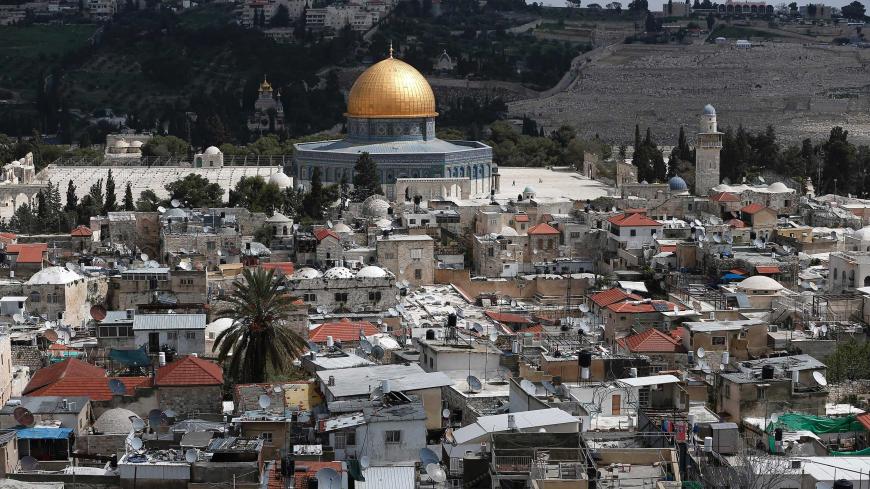 The Dome of the Rock is seen with houses in Jerusalem's Old City in the foreground, March 17, 2016. - THOMAS COEX/AFP/Getty Images

According to American Friends of Ateret Cohanim, “The aim of Ateret Cohanim is to fulfill a generations old dream of rebuilding & securing a United Jerusalem, strengthening our Jewish roots and reestablishing the once thriving Jewish communities.”

The story of the transfer of the house to Jewish hands is full of intrigue, claims and counterclaims, money, internal politics and the role of local and international players, including ones in the United Arab Emirates. Al-Monitor was told key details of the story by reliable sources.

Khaleel Assali, the correspondent of Sawa Radio in Jerusalem, told Al-Monitor that the case involved a well-respected Jerusalemite, Adeeb Jodeh, who has been looking to sell his family home. “He made visits to various Palestinian organizations and individuals, trying to convince them to buy the house so that it doesn’t fall in the wrong hands,” Assali said. Homes in the Old City are sold for very high prices.

Jodeh was not living in the house at the time of its sale.

Fadi Elsalameen, an American-Palestinian known to be a crusader against the corruption of Palestinian officials and a nonresident fellow at The Foreign Policy Institute at The Johns Hopkins School of Advanced International Studies, told Al-Monitor he was approached in 2013 by Nabil Jaabari, chairman of the board of Hebron University, and asked if he could help secure funds to purchase Jodeh’s house.

“I spoke to my contacts in the Gulf and was told that the UAE's Tharaa Fund is interested in protecting Palestinian homes and they were willing to advance me the $2.5 million as a grant to buy the house,” Elsalameen said.

Jaabari is a respected Palestinian leader and Elsalameen’s ancestors come from the Hebron area. The fact that Elsalameen has been an anti-corruption crusader provided comfort to Jaabari. It is unclear how exactly Elsalameen obtained the funds. While critics say he worked closely with Mohammed Dahlan, a former Fatah leader who is persona non grata with the Palestinian Authority, to secure the money, Elsalameen said this was not true in an interview with Al-Monitor.

Elsalameen said he instructed his lawyer to set up a holding company in Ramallah to ensure that the house, once purchased, would be a protected waqf (endowment) and proceeded to make a $1.5 million down payment. Waqf properties are owned for life by an Islamic endowment.

The Palestinian leadership, largely the intelligence service, and its supporters have accused Elsalameen of being a proxy for Dahlan, who has close relations with leaders of the United Arab Emirates. Palestinian officials alleged that Elsalameen was a tool of Dahlan.

Elsalameen denied the accusation and said what he tried to do was to protect a property from slipping to the other side. “My fears have proven correct,” he said by phone from Washington.

Assali, the publisher of the Jerusalem-centric website Akhbar el-Balad, told Al-Monitor that the Ramallah-based leadership advised the homeowner to sell the house instead to a well-known Palestinian banker named Khaled Attari. The Palestinian governor of Jerusalem at the time, Adnan Husseini, vouched for Attari and the sale, which was consummated in April, seemed to have the blessing of the Palestinian government, Assali said. Husseini was relieved of his position Sept. 1 and replaced by Fatah Revolutionary Council member Adnan Ghaith. It is unclear if Husseini’s replacement is connected to this case or not.

On Oct. 3, about six months after this controversial sale to Attari, Jewish radicals moved into the house, claiming they had purchased it. The Israeli daily Haaretz ran a long piece Oct. 9 saying Ateret Cohanim had purchased the house using an offshore company named Daho Holdings for $17 million. The Israeli daily also wrote about Palestinians' internal struggles and the mutual recriminations over who is responsible for what happened.

The case has caused a powerful reaction among Jerusalemites, with blame and accusations going seemingly everywhere; among those faulted is the head of the Palestinian intelligence service, Majed Faraj, as reported in the London-based Arabi21. Palestinian Prime Minister Rami Hamdallah announced in the weekly Cabinet meeting Oct. 9 that an investigative committee has been set up to get to the bottom of the story.

In Jerusalem itself, a rare joint statement issued Oct. 12 by the nationalists and Islamic forces (a reference to Fatah- and Hamas-affiliated activists) called for the need to implement the Jordanian Penal Code of 1960, punishing with life imprisonment anyone convicted of selling properties to Jews.

Khaled Abu Arafeh, the former minister for Jerusalem affairs in the short-lived 2006-07 Palestinian government of Hamas leader Ismail Haniyeh, told Al-Monitor that while the sale of properties is still a minor issue, the Palestinian leadership has to explain its position to the public. “These kinds of high-profile stories demoralize the people and cause shock and anger toward the official Palestinian leadership, which has failed to convince the public of its position in light of the accusations that the issue is an internal struggle between Dahlan and the intelligence service.”

Abu Arafeh called for a strategic stand and “an action plan that will put a stop to the attempts to slowly double the Jewish presence in the Old City.”

Veteran Palestinian writer Jack Khazmo reiterated in a column published on the Akhbar el-Balad website Oct. 9 the “need to put aside funds to ensure that properties are renovated, people are empowered to stay put and that no property in our beloved Jerusalem is allowed to slip through.”

The chaos surrounding the issue of properties in Jerusalem points to a larger problem, namely the absence of a unified solid political leadership that can guide the city’s 330,000 Palestinians. The Palestinians of Jerusalem have become political orphans. with Israel trying to slowly deport them or make their lives miserable. while the Palestinian leadership in Ramallah is prevented from representing them.