Turkey and Israel spar over Jerusalem

Turkey's increased support and involvement in Jerusalem to support Palestinians have created a backlash in Israeli media. 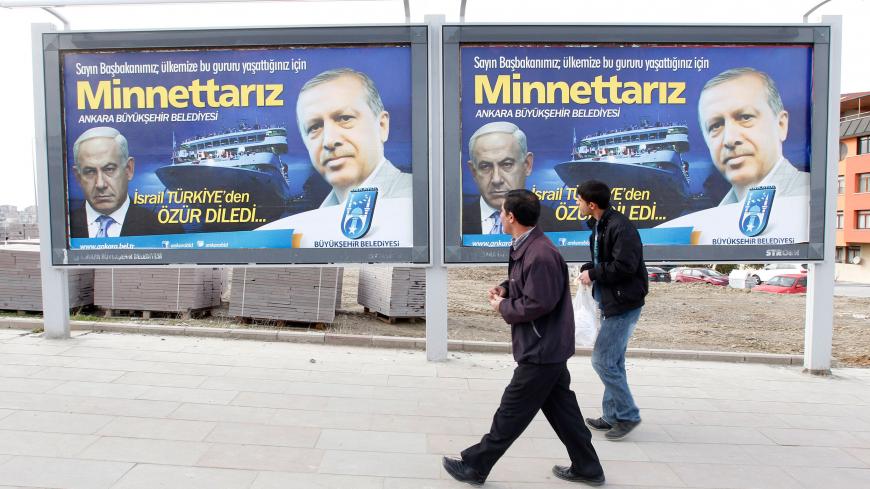 The contentious Israeli-Turkish relationship continues to witness ups and downs as Israel appears to have begun a campaign to counter Turkey’s increased interest in Jerusalem. As part of Turkey’s support for Jerusalem and Palestinians, more Turkish tourists are coming to Jerusalem, and Israel has made claims of Turkey’s attempts to purchase properties in the holy city. A smear campaign has been initiated in parts of the Israeli media against Turkey and its president, Recep Tayyip Erdogan.

Khalil Assali, publisher of the Jerusalem-focused website Akhbar el-Balad, told Al-Monitor that there is nothing new from Turkey, but Israeli media has been pumped up to smear the Turks. “The attacks on Turkey are aimed at forcing the Turks to improve their relationship with Israel,” he said.

Turkey, a member of NATO, has had strong military, political and economic ties with Israel for decades. Recent Israeli human rights violations against Palestinians have been flagged by Turkey’s pro-Palestinian president. Erdogan ordered the expulsion of the Israeli ambassador after the May 15 shootings of unarmed Palestinians in Gaza protesting the US move of their embassy to Jerusalem.

Relations had soured years ago after Israeli navy troops killed nine Turkish protesters in international waters back in 2010. It took six years before Turkey and Israel restored relations in June 2016, following a deal that included Israeli compensation and an apology for the killings of the Turkish protesters.

Turkey’s pro-Erdogan Daily Sabah reported July 10 on the “smear campaign” that Israel is conducting against Turkey as well as against its president and his family. The website noted that Israeli daily Yedioth Ahronoth’s July 6 supplement "attempted to defame" the Turkish first lady, Emine Erdogan, in a piece titled “Sultana.” The report, available only in Hebrew, attacked the Turkish first lady, saying she is addicted to shopping, and it detailed her clothing, handbag and jewelry selection purchased at reportedly exorbitant prices.

Sabah also noted that various Israeli media outlets claimed that some Arab countries and Palestinians have “become fed up" with Turkey’s activities in the occupied city of Jerusalem.

On May 16 — and following the killing of unarmed protesters in Gaza over the move of the US Embassy to Jerusalem — Erdogan made it clear that his country will not sit idle as Palestinians were being killed. Israel’s Jerusalem Post ran a Reuters story quoting Erdogan as saying, “We will not allow Jerusalem to be stolen by Israel.”

Assali, who has been focusing on Palestinian-Turkish relations on his website, confirmed to Al-Monitor some of the Turkish activities in Jerusalem. “It is true that they have given some humanitarian aid, are funding Iftar meals in Ramadan and helping restore some dilapidated homes in the Old City, but the Israeli campaign is exaggerated.”

He said that Turkey, which has a separate consulate in East Jerusalem, has always been interested in Jerusalem for religious and historical reasons. “It is true; they tried to help support the Islamic Museum that is within the Haram al-Sharif but were told that they need to direct any such support through the Jordanian Waqf,” Assali said, based on his sources in Jerusalem’s Waqf department.

Ottomans ruled the Middle East region for 400 years, and some claim the current president is trying to revive the Ottoman Empire.

Hanna Issa, secretary general of the Islamic Christian Committee for Jerusalem and the Holy Sites, told Al-Monitor that since Erdogan gained power he has been trying to revive the glory of the fallen Ottoman Empire. “Turks believe that they are most qualified to manage the Islamic sites in Jerusalem and to deal with Christians stemming from their experience as having produced the 1852 Status Quo agreement that is still in play today.”

The Status Quo agreement has been the reference point for resolving any of the complicated issues regarding religious owners and administration of holy places in Jerusalem.

Issa added that Israel is playing various Arab and Muslim countries against each other so that it can continue to control the holy city. “The Israelis try to please Gulf countries at times, pressure Jordan at other times and tell Turks ‘come let us agree on a role for you.’ But in the end, this shuffling of the deck allows Israel to stay in power.”

Ali Qleibo, an internationally known artist and writer, told Al-Monitor that issues of sovereignty and sacredness are the heart of the conflict in Jerusalem. “Al-Aqsa Mosque is a contested holy site. Turkish Sunni Muslims from the Ayyubid, Mamluk [and] Ottoman periods to the present defer to Jerusalem as the holy par excellence: Beit al-Maqdis,” Qleibo said.

Qleibo, who lectures at al-Quds University in art history and the history of Jerusalem, described Turks as defenders of Sunni Islam and noted that they have always sought to defend Islam’s third holiest site and “by extension, safeguard the people living in its vicinity. In this sense, Sunni Turks remain at the vanguard in the escalating tension over the sovereignty and integrity of the Noble Sanctuary.”

The Israeli-Turkish relationship has often been focused in the military sphere, largely as part of Turkey’s NATO membership. As Erdogan has been seen as weakening the army in relation to the political leadership and as he tries to revive the glory of the Ottoman Empire, the issue of Jerusalem provides a visible and winnable formula in his effort. Turkey’s Erdogan has become a rock star in Palestine in general and in Jerusalem in particular. Turkey is unlikely to permanently break its diplomatic relationship with Israel, but short of that, Erdogan will not miss an opportunity to support Palestinians in Jerusalem and publicly slam the Israelis for their occupation and human rights violations against Palestinians.