Jerusalem Municipality destroyed a plaque marking Turkey’s contribution to the restoration of a cemetery in the city as Israeli concerns over the Turkish activities in East Jerusalem persist. 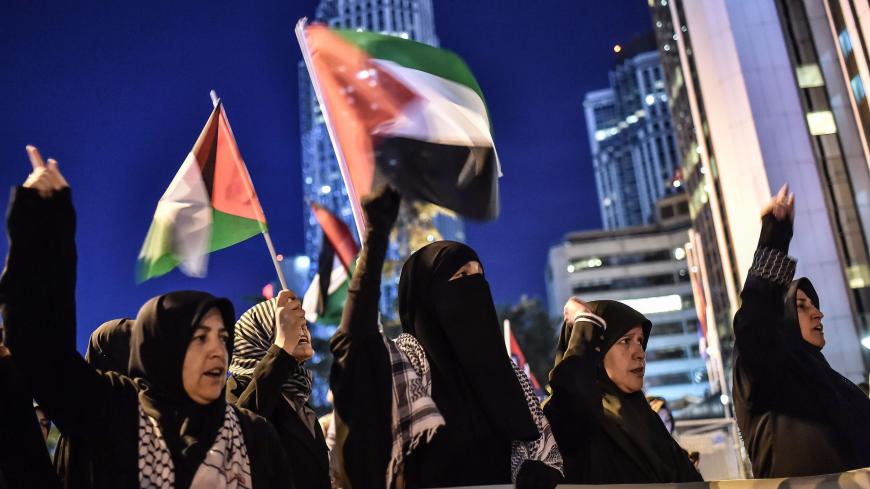 Protesters wave Palestinian flags in front of the Israeli Consulate in Istanbul on May 15, 2018, during a protest against the killing of 59 Palestinians in clashes and protests. - OZAN KOSE/AFP via Getty Images

RAMALLAH, West Bank — On June 24, the Israeli police and a team from the Jerusalem Municipality demolished a stone plaque bearing the Turkish flag and the emblem of the Turkish Cooperation and Coordination Agency (TIKA) in Jerusalem. The stone plaque had been placed there to mark Turkey’s contribution to a restoration project for the city’s Yusufiye Cemetery.

Yusufiye Cemetery, which is affiliated with the Islamic Waqf and adjacent to the Old City wall, is well known in Jerusalem and hundreds of years old. It was restored with the support of Turkey via TIKA, but Israeli police claim that no license was issued for the plaque to be placed.

TIKA’s media office told Al-Monitor, “Turkish stone plaques were illegally taken off the wall of Yusufiye Cemetery, which the agency has restored. This shows that the Turkish efforts for peace and prosperity in the region are arousing discomfort.” It stressed that all of the agency’s activities are carried out “with the permission and approval of the countries it cooperates with, and all necessary procedures were respected in the Yusufiye Cemetery restoration works that were completed in 2015, upon the request and in cooperation with the local authorities.”

TIKA added that it will “continue to deploy efforts to protect the historical monuments in Jerusalem for future generations and add value to the region. The efforts made by those who seek to malign the Turkish institutions’ activities in Palestine will not succeed.”  It explained, “In order to prevent such an unfortunate and illegal act from happening [again] at Yusufiye Cemetery, our Ministry of Foreign Affairs and office in the region will follow the official diplomatic and legal procedures.”

Turkey's presence in Jerusalem has been increasingly angering Israel. Ever larger numbers of Turkish pilgrims have been visiting Al-Aqsa Mosque since 2015, after Turkey's Directorate of Religious Affairs (Diyanet) included Al-Aqsa Mosque in the Turkish umrah program and Turkey pumped millions of dollars in aid, relief and charity projects via Turkish institutions such as TIKA.

Israeli author Yossi Melman wrote in the British Middle East Eye newspaper June 26 that Turkish activity in Jerusalem, part of its strategic moves in the Middle East, has become a threat to Israel. Melman noted that the Israeli police and security services are monitoring Turkey's growing activities in occupied East Jerusalem via TIKA, which provides the Palestinians with cash and food donations. He said, “The Israeli authorities claim that under the guise of cultural and humanitarian work, Turkey is promoting the ideology of the Muslim Brotherhood as well as [President Recep Tayyip] Erdogan's grandiose vision of restoring the glory days of the Ottoman Empire, which ruled Palestine for centuries until World War One.”

Israel Hayom, which is tied to Israeli Prime Minister Benjamin Netanyahu, published a study June 22 by a researcher who previously worked as an adviser on East Jerusalem affairs at the Jerusalem Municipality, which found that “Turkey is the non-Arab Islamic country that is currently leading the action in East Jerusalem and funding nearly 10% of the civil society activities.”

Israel Hayom also revealed June 1 that Israel and Saudi Arabia have been engaged in secret US-backed talks since December about having Riyadh join the Jordan-run Jerusalem Islamic Waqf Council.

The newspaper quoted an anonymous Saudi source as saying that Jordan has grown more flexible and consented to Saudi Arabia joining the council due to increased Turkish influence at Al-Aqsa. Jordan conditioned its approval on Saudi Arabia channeling funds to other Islamic associations in Jerusalem to push back the Turkish ones, according to the paper.

In response to the Israeli report, Turkey stated its support for Jordan’s position in Jerusalem. The Turkish Embassy in Amman said in a June 4 statement, “Turkey supports Jordan in the role it plays to protect the holy sites in Jerusalem,” and expressed confidence that Amman will do so to the best of its ability, a tacit rejection of any Saudi role in the management of the Islamic holy sites in Jerusalem.

Meanwhile, the Israeli Ministry of Foreign Affairs has developed a plan to counter Turkish influence in Jerusalem. Israel Hayom first reported on Oct. 6, 2019, that there was a plan designed to hinder the Turkish aid delivery to the Palestinians, including aid to rebuild the houses in the Old City, and revoking residence permits from Turkish language teachers. It is still unknown when the government will discuss the plan.

Jerusalemites' appreciation for Turkish support is also raising concern in Israel. Sheikh Ekrima Sabri, the president of the Supreme Islamic Council in Jerusalem, told Al-Monitor that destroying the stone plaque at the cemetery, and with it historic documentation of the Turkish government’s restoration efforts, points to Israeli concern about Turkish influence.

Head of the Jerusalem-based Anti-Judaization Committee Nasser Hadami told Al-Monitor, “The Turkish activities in the city preserve Jerusalem’s Islamic identity and culture and enhance the Jerusalemites’ resilience. That has annoyed Israel, which seeks to change the city’s history and features.”

Israeli-Turkish relations are unstable after decades of strong economic and military relations. The two parties severed ties in 2010 following the Israeli attack on the Mavi Marmara ship carrying aid to the Gaza Strip that killed 10 Turks. In March 2013, Prime Minister Benjamin Netanyahu apologized to Erdogan about the attack. On June 27, 2016, the two sides signed an agreement to restore diplomatic ties, according to which Israel would pay $20 million in compensation to the victims’ families and Turkey would be permitted to send humanitarian aid to the Gaza Strip.

The suppression of Turkish activities in Jerusalem not only reflects the tepid bilateral relations between Israel and Turkey but shows Israel's eagerness to extend sovereignty over the city.