Turks explore Ottoman past in visits to Jerusalem 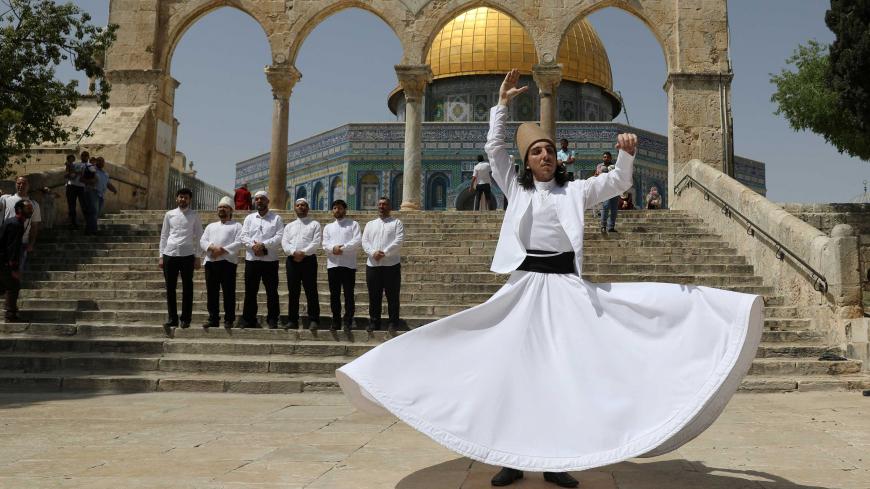 A Turkish performer dances during the "Ascension of the Prophet Muhammad" ceremony next to the Dome of the Rock in the compound known to Muslims as Noble Sanctuary and to Jews as Temple Mount, Jerusalem's Old City, April 22, 2017. - REUTERS/Ammar Awad

RAMALLAH, West Bank — A Turkish delegation of 110 members from Meram district municipality, in Konya province, arrived in Jerusalem Nov. 9 in support of an initiative — dubbed “Following in the footsteps of Abdul Hamid” — which was designed to clean up the Ottoman buildings, alleys of Jerusalem's Old City and the area of Al-Aqsa Mosque, and to sprinkle rose water there.

The initiative was launched in November by the Meram district municipality, with the aim of promoting the Turkish presence in Jerusalem, making visits to Al-Aqsa Mosque in response to Turkish President Recep Tayyip Erdogan's calls and learning about the Ottoman antiquities in the Palestinian territories.

Fatma Toru, the head of the delegation and mayor of the Meram district, told the press at Al-Aqsa Mosque that their visit to Jerusalem came after Erdogan urged the Turks to visit Jerusalem. She said that they cleaned up the inside and outside of 60 old buildings as well as the alleys in the Old City. She added that they sprinkled rose water in the courtyards of Al-Aqsa Mosque, like the Ottoman sultans had done in the past.

Accompanied by Jerusalemite girls and boys, the delegation toured the alleys of Jerusalem's Old City picking up trash and placing it in plastic bags.

The Burj al-Luqluq Social Center Society, which works in close cooperation with the Turkish government, welcomed the delegation at Al-Aqsa Mosque.

Mousa Hijazi, a member of the society’s administrative board, told Al-Monitor that the delegation stayed three days in Arab hotels in Jerusalem, played a soccer game with the Palestinian Doctors’ Association team, cleaned the Ottoman buildings in the Old City of Jerusalem and sprinkled rose water in the compound of Al-Aqsa Mosque.

Hijazi said, “The number of Turkish visitors in Jerusalem has increased. They stay in its Arab hotels and make purchases in its shops.” He pointed out that on Nov. 9-10, visitors who were part of the Meram delegation hit a record number of nearly 600. The society, however, could not provide a precise number of visitors per year.

There are no accurate figures on the number of Turkish visitors, as some of them arrive in the Palestinian territories through Jordan, while others arrive via Ben Gurion International Airport in Tel Aviv — and Jerusalem is not under Palestinian control.

Sheikh Omar Kiswani, the head of Al-Aqsa Mosque compound, told Al-Monitor, “Turkish Muslims make up the largest part of visitors at Al-Aqsa compared to other Muslims [such as Indonesians and Malaysians]. Dozens of Turkish worshippers can be seen at the mosque every Friday.”

Turkey’s Directorate of Religious Affairs (Diyanet) decided in February 2015 to include Al-Aqsa Mosque in the Turkish pilgrims' program. The decision allowed pilgrims to make a three-day visit to Al-Aqsa Mosque before heading to Mecca and Medina to perform the umrah pilgrimage. Diyanet head Muhammad Gormaz visited Jerusalem on May 14, 2015, and performed the Friday sermon at Al-Aqsa the following day.

Erdogan called on Turkish citizens and Muslims around the world to visit Jerusalem on several occasions, most recently on July 25. The Independent reported him as saying, “From here I make a call to all Muslims. Anyone who has the opportunity should visit Jerusalem, Al-Aqsa Mosque. … Come, let’s all protect Jerusalem.” Erdogan gave this statement as he addressed his Justice and Development Party’s weekly session in parliament during the July unrest in Jerusalem.

The director of the Turkish Cultural Center in Jerusalem, Ibrahim Furkan Ozdemir, told Al-Monitor, “Erdogan had previously encouraged visits to Jerusalem and Al-Aqsa, and recommended to visit Jerusalem. So Turkish members of parliament, citizens and officials are heading to Jerusalem. Jerusalem hosts an estimated 35,000 Turkish visitors a year.”

He added that they plan to continue the visits, saying, "To us, [Al-Aqsa] is important at the religious level. Turks visit Jerusalem and Al-Aqsa Mosque while on their way to perform umrah in Mecca, and because we do not want to leave the Palestinian people alone in Jerusalem.”

The Turkish interest in Jerusalem is not only limited to visits to the city. Rather, the provision of millions of dollars in aid and relief projects via Turkish institutions — such as the Turkish Cooperation and Coordination Agency (TIKA), Mesale International Student Association and Qanadeel International Institution for development and humanitarian relief, which was shut down by Israeli Defense Minister Avigdor Liberman in December 2016 over alleged ties to Hamas — points to this interest. This is added to the Turkish political stances opposing Israel, in light of the situation on the ground in Jerusalem, most recently during the July unrest.

The Turkish presence generated an Israeli provocation. Israel Hayom, which is pro-Israeli Prime Minister Benjamin Netanyahu, published June 21 an article on the increased Turkish presence in Jerusalem, and stated that the Turkish government is pumping millions of dollars to support the Palestinian presence and promote the Muslim identity of the city, via TIKA, which since 2004 has invested millions of dollars in 63 projects in East Jerusalem.

The July unrest resulted in a political escalation between Turkey and Israel that reached a climax on July 25 with the Jerusalem Post quoting Netanyahu as saying that “Erdogan is ‘the last person’ who can preach to Israel.” On the same day, the Israeli Ministry of Foreign Affairs stated that “the days of the Ottoman Empire are over,” in response to Erdogan calling on Muslims all over the world to be united in protecting Jerusalem.

Ahmed Ruwaidi, the Organization of Islamic Cooperation (OIC) envoy to Palestine, told Al-Monitor that visits by Islamic delegations to Jerusalem — most notably the Turkish delegations — contribute to the city's and Jerusalemites' steadfastness, boost the local economy and are in line with the political stance of the PA and OIC, which also calls on Muslims to visit Jerusalem.

While the initiative is symbolic and is only designed to clean up the area of Al-Aqsa Mosque and the Ottoman buildings in Jerusalem in order to show support to the Jerusalemites, it also highlights the increased Turkish presence and interest in the city at the official and popular levels.