The Israeli authorities have bulldozed parts of the Yusufiya cemetery near Al-Aqsa Mosque in Jerusalem to build a park. 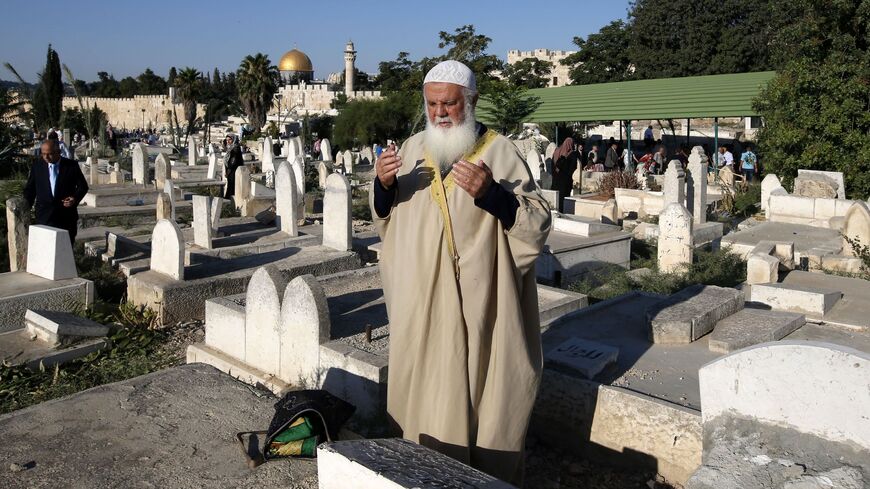 A Palestinian man prays over the grave of a loved one at a Muslim cemetery near the Al-Aqsa Mosque compound in Jerusalem's Old City on July 6, 2016. - AHMAD GHARABLI/AFP via Getty Images

RAMALLAH, West Bank — The Israeli police have tightened the siege on the Yusufiya cemetery near Al-Aqsa Mosque in Jerusalem, while the municipality and the Israeli Nature and Parks Authority have been demolishing parts of the cemetery and tombstones since Oct. 25.

On Oct. 28, the Israeli authorities fenced the walls surrounding the cemetery and installed surveillance cameras, and on Oct. 29, Israeli police fired tear gas to prevent dozens of Jerusalemites from visiting their dead.

The Jerusalem municipality has been working overtime to demolish more parts of the cemetery since Oct. 17, when the Jerusalem Magistrate’s Court rejected a request submitted by the Committee for the Care of Islamic Cemeteries in Jerusalem to suspend bulldozing the cemetery and exhuming graves.

The Israeli authorities are seeking to turn this part of the cemetery, which includes the Martyrs’ Monument where Palestinians and Jordanians who fought in the 1967 war are buried, into a public biblical park, around the walls of the Old City.

The Yusufiya cemetery was established at the beginning of the Muslim conquest of Jerusalem, but it was restored and expanded during the reign of Salah al-Din al-Ayyubi and was named after him — Youssef bin Ayoub bin Shadi. It is an extension of the Bab al-Rahma cemetery. After the city was occupied in 1967, the Jerusalem municipality took possession of the part that includes the graves of the martyrs.

The total area of the Yusufiya cemetery is 25 dunums (about 6 acres), four dunums (1 acre) of which Israel aims to build the park over. It is one of the four Islamic cemeteries in Jerusalem and is located near the Jerusalem wall and the Lions Gate, which is the most important entrance to the Old City.

Najeh Bakirat, the deputy director-general of the Jerusalem Waqf, told Al-Monitor that the bulldozing is part of a bigger Israeli project, which is building a temple in the place of Al-Aqsa Mosque, so it is working to establish biblical parks surrounding the Old City and the walls of Al-Aqsa, to overwhelm Jerusalem’s public scene with Judaization.

That work is proceeding on three levels, Bakirat said. The first is to erase the Arab-Islamic scene, such as Islamic cemeteries and homes, and to replace them with Israeli parks that include signs in Hebrew.

It is also trying to displace Muslim Jerusalemites, so that many began burying their dead outside the city. On the other hand, Israel is increasing the number of Hebrew settlers and attracting them to the city, he explained.

The third approach, Bakirat said, is replacing Arabic names with Hebrew ones, as well as altering the general geographical scene. He expects that Israel will not stop at targeting four dunums of the Yusufiya cemetery, but will continue to nibble at the remaining areas until it takes control completely.

Bakirat pointed out that Israel did the same in the Ma'man Allah cemetery, on which Israel built the Museum of Tolerance, in addition to tourist facilities. Israel took control of the site in 1948. The municipality built two streets in the western part of it, and then the Independence Park, a huge parking lot, the Leonardo Plaza Jerusalem Hotel, and several cafes. In the eastern part of the cemetery, it began building the Museum of Tolerance.

The Palestinian Authority warned against bulldozing the Yusufiya cemetery, as President Mahmoud Abbas’ advisor for religious and Islamic affairs, Mahmoud al-Habbash, spoke on Oct. 27 about “the ongoing crime committed by the occupation’s bulldozers against the Yusufiya cemetery in occupied Jerusalem. …This could lead to violent confrontations with the occupation forces in a way that no one expects.”

The Grand Mufti of Jerusalem, Muhammad Hussein, told Al-Monitor, “The cemeteries are part of the identity of the holy city and its narrative, and evidence of the Arab and Islamic presence in the city for thousands of years. Obliterating the city’s landmarks is in the interest of the Jewish settlement project and the Israeli narrative, which is embodied by changing the names of Arab cities, neighborhoods, and streets, and the Judaization of public places and landmarks.”

Ahmed Dajani, a member of the Committee for the Care of Islamic Cemeteries in Jerusalem, told Al-Monitor that the area in the Yusufiya cemetery that Israel is bulldozing includes the remains of dozens of Jordanian soldiers who died the 1967 war. Jerusalemites had to burry them there in light of the curfew imposed on the city at that time.

The Israeli Nature and Parks Authority and the Israel Antiquities Authority are colluding with the Jerusalem municipality on the project, Dajani said: “Before starting any project, the Israel Antiquities Authority searches for antiquities and bones, but it did not do so in the Yusufiya cemetery, because the Jerusalem municipality wants to carry on with the project no matter what, although it is well aware whom the remains buried there belong to."