Stateless Jerusalemites call on Jordan to restore their citizenship

Palestinians living in Jerusalem are concerned about their future and ways to protect themselves and their properties amid calls to have their Jordanian citizenship restored. 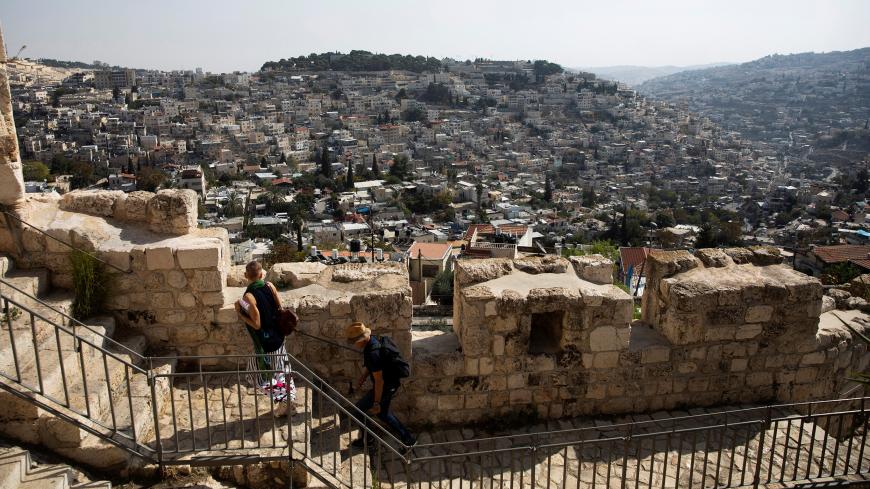 The Palestinian neighborhood of Silwan is seen in the background as people walk on a promenade along the surrounding walls of Jerusalem's Old City, Nov. 7, 2019. - REUTERS/Ronen Zvulun

Some 350,000 stateless Palestinians live in Jerusalem. Their plight has deteriorated over the years, especially since the 1993 PLO-Israel Declaration of Principles (also known as the Oslo Accord) that separated East Jerusalem from the rest of the occupied territories.

While Jerusalem is a final status negotiation issue, the reality on the ground after a quarter of a century — especially under the right-wing Israeli government of Benjamin Netanyahu — has focused in large part on attempts to cut off any connections between Palestinians in Jerusalem and the Palestinian leadership in Ramallah.

Khalil Assali, the publisher of an East Jerusalem-focused website, Akhbar el Balad, wrote Dec. 23, “Jerusalemites are yearning for a return of Jordanian citizenship.” Al-Monitor talked with dozens of East Jerusalemites from different backgrounds and their answer was unanimous in support of the idea.

Ibrahim Johar, a novelist born in Jabal al-Mukaber in East Jerusalem, told Al-Monitor that East Jerusalemites are caught in a bind. “They carry Jordanian passports without Jordanian citizenship and they carry Israeli travel documents. If Jordan is willing to help stop attempts by some to become Israeli citizens, then this idea [to become Jordanian citizens] is a clever and courageous idea.”

Jordan, which controlled the West Bank, including Jerusalem, before 1967 and gave Palestinians citizenship, broke off relations with the West Bank in 1988 following the outbreak of the first intifada in 1987. Citizenship, however, was not immediately withdrawn. After the Oslo Accord was signed, Jordan began a process of withdrawing citizenship from all Palestinians.

Wasfi Kailani, director of the Royal Hashemite Fund for the Restoration of Al-Aqsa, told Al-Monitor that the Jordanian government is aware of the plight of Jerusalemites but the issue is not on the agenda of the Jordanian government. Kailani said, “We have taken note of the deteriorating situation in East Jerusalem especially after Israeli Minister of Public Security… Gilad Erdan’s decision to sever all ties between Palestinian educational institutions in Jerusalem and the Palestinian government. Some 42 schools run by the Jordanian waqf, which use Palestinian curriculum, were ordered closed last month [Nov. 6], leaving 20,000 students without any educational reference.”

The Jordanian Waqf Ministry, which pays for more than 1,000 employees protecting Al-Aqsa Mosque and other religious sites in East Jerusalem, on Nov. 6 signed an agreement in Amman with the UN Development Program and the Hashemite Fund to create a fund that supports Jerusalemites in four areas: education, housing and reconstruction of homes, cultural preservation and commercial sustainability.

On Nov. 20, Erdan closed Palestinian health, education, and family organizations and ordered a local TV company not to provide technical services to Palestine TV. The Arab Health Center operating in Silwan was also closed by orders of Erdan because it receives financial support from the Ramallah-based Palestinian government.

Margo Tarazi, co-owner of Universal Tourist Agency, told Al-Monitor that the problem is about the rights of people living in Jerusalem. “We don't know what the future will hold but it is better to have a nationality than to turn into a refugee.”

Tarazi said she understands and supports people who are calling for Jordanian citizenship. “I personally cannot imagine myself moving to Jordan, but I totally support the idea. If the question is if they had the choice to make between Israeli & Jordanian citizenship, they would certainly choose Jordan. Many people have no other choice. I think it depends on each person and their circumstances. If the Jordanian government secures their presence then they should apply for that.”

Assali, who began the discussion on the issue in his article, told Al-Monitor that for the Israeli government, the issue of Jerusalem is not open to discussion. “But for Jerusalem’s Palestinians the idea of Jordanian citizenship is not about moving to Jordan or even voting in Jordanian elections, but about protecting their rights and properties in Jerusalem.”

Jamal Dajani, a Jerusalemite and former spokesman of Palestinian Prime Minister Rami Hamdallah's government, told Al-Monitor that the issue is complicated and might reinforce Israel’s claim to Jerusalem by saying that Palestinian Jerusalemites are foreign nationals. Dajani called for a vote for Jerusalemites to make such a decision. “I think that this should be a personal choice: There is a small number of Palestinian Jerusalemites who opted for Israeli citizenship. There are those who were born during Jordan’s rule, like me and my siblings; and there are those who were born during the British Mandate like my mother — she is 92. How do you bridge between all these categories? This requires a vote.”

The absence of any movement in the negotiations appears to be playing into the hands of the Israelis, who are trying to further secure their hold on Jerusalem while hesitating in giving East Jerusalem residents any rights. The move for Jordan citizenship is a defensive one aimed at having formal connections with a regional country that has more sway and power with the Israelis than their own Palestinian government. Jordan has succeeded in protecting holy sites and was instrumental in the return of two Jordanians who were administratively detained by Israel in November. In the absence of a US administration that attempts to care or appear as an honest broker, the latest call by Palestinians is a call for survival amid an Israeli onslaught that has little respect for international law and rights.