The recent transfer of a Palestinian-owned property in the Old City of Jerusalem to settlers caused anger in the Palestinian territories, as the seller and buyer exchange accusations. 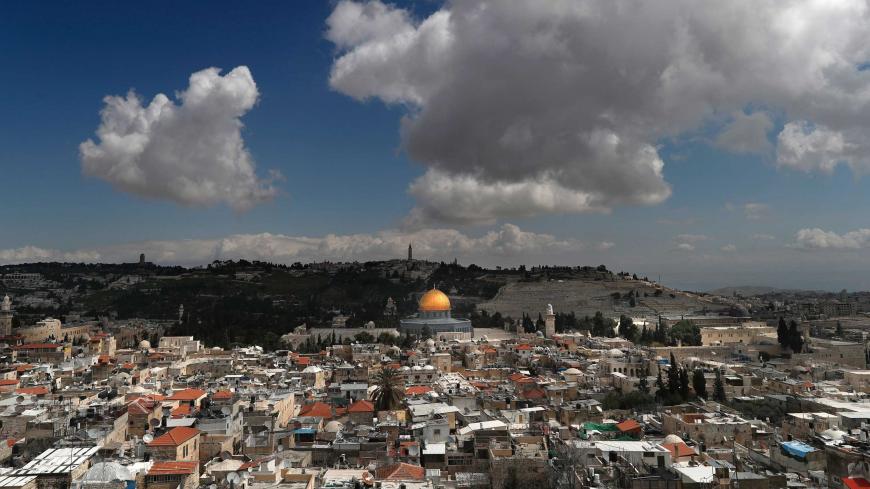 The Dome of the Rock in Al-Aqsa Mosque compound is seen surrounded by houses in Jerusalem's Old City, March 17, 2016. - THOMAS COEX/AFP/Getty Images

RAMALLAH, West Bank — Jerusalemites were dealt a distressing blow Oct. 4 as settlers took over a three-story house of 500 square meters (5,382 square feet) that the Joudeh al-Husseini family owned in Aqaba Darwish in the Old City of Jerusalem. This came one day after the pro-settler Elad organization took over a dwelling in Wadi Hilweh quarter of Silwan neighborhood, south of Al-Aqsa Mosque, which the US-based Fatiha family owned.

The transfer of the Joudeh al-Husseini house to settlers prompted Palestinian Prime Minister Rami Hamdallah to announce at the Oct. 9 Cabinet meeting “the formation of a committee to inquire into the case and hold the involved parties accountable.” He did not, however, specify its formation and operational dates or the parties partaking in the committee.

This case has attracted wide interest in the Palestinian territories, particularly since it is located in a strategic spot in the Old City and is close to Al-Aqsa Mosque.

Al-Watan local newspaper quoted Adeeb Joudeh al-Husseini as saying Oct. 4 that this has been an ongoing saga since 2013, when his family decided to put the house up for sale. Back then, Fadi al-Salameen, a US-based Palestinian activist, offered to pay $2.5 million for the house. Although the purchase contract was signed, the Palestinian Authority (PA) interfered and seized Salameen’s bank funds for being related to dismissed Fatah leader Mohammed Dahlan. Salameen failed to pay the installments, which thwarted the deal in 2016, Joudeh al-Husseini said.

The PA's direct and intentional interference came as Palestinian Attorney General Ahmad al-Barrak issued on May 31, 2016, a decision to confiscate Al-Sarina International for Trade and Investment, Salameen's company that obtains funds from Dahlan’s Al Thuraya Investment Company, according to Barrak. This came only four days after the Lebanese Al-Akhbar newspaper published an investigative report on Salameen receiving financial support from the United Arab Emirates to buy houses in Jerusalem, via Dahlan.

Nevertheless, since the settlers took over the property Oct. 4 and the sale was disclosed, Joudeh al-Husseini and Attari have been exchanging accusations in the local media and on social media of selling the property to Daho Holdings, which in turn sold it to a right-wing Israeli nongovernmental organization. According to Israeli newspaper Haaretz, Daho Holdings is a foreign holding company registered in the Caribbean.

Haaretz wrote in a report Oct. 9 that Attari sold the house for $17 million.

In a video segment of a meeting Oct. 12 gathering lawyers, Jerusalemite elites, Joudeh al-Husseini and Attari, the latter denied any ties with Daho Holdings and knowledge of documents that the lawyers presented. Attari accused Joudeh al-Husseini of selling the property at times, and Salameen at others.

On Oct. 8, a document was posted on the Facebook page of Al-Quds Bawabat As-Sama (Jerusalem, Gate of Heaven), which page administrator Kamal Abu Quwaider wrote he obtained from the Israel Land Authority. The document shows that the property was registered with the authority under the name of Khaled al-Attari on April 23, and that Attari had sold the property to a foreign company called Daho Holdings on the same day.

Abu Quwaider, a social media activist from Jerusalem, told Al-Monitor, “I have in my possession recordings and documents proving that Khaled al-Attari sold the property. I have [already] published a document proving that the transferred property was registered under his name and that he is the one who sold it to settlers,” in reference to Daho Holdings that has close ties to the settlers.

He scolded the Palestinian security services and former Jerusalem Gov. Adnan al-Husseini for failing to take action. He said that three months ago, he shared with them in person his doubts about the transfer and sale of the property to the settlers.

Al-Monitor tried to get in contact with Attari and Joudeh al-Husseini, but to no avail.

The transfer of properties and buildings in Jerusalem has ignited official and popular reactions. The Palestinian Supreme Fatwa Council reiterated Oct. 11, “The transfer of properties and lands in Jerusalem or any other part of the Palestinian territory to the Israeli occupation is prohibited.” It continued, “The sale, transfer or facilitation of appropriation via mercenary brokers is a treason against the homeland and religion.”

Jerusalem’s national and Islamic forces demanded in a strongly worded statement Oct. 11 that the PA and security services hold accountable those involved in the sale of properties and land in Silwan and the dwelling of the Joudeh al-Husseini family in the Old City.

On Oct. 20, 2014, Palestinian President Mahmoud Abbas issued a decree amending Article 114 of the Jordanian Penal Code No. 16 of 1960. The amendment sentences whoever transfers, leases or sells the land to a hostile state or any of its subjects to life imprisonment with hard labor, instead of a short sentence with hard labor.

He noted that extreme anger at the latest property transfer prevails among Jerusalemites for countless reasons, most notably the property’s location neighboring Al-Aqsa Mosque and the presence of influential and unknown Palestinian parties that facilitated the transfer of the property to the settlers. In addition, the PA's failure to explain quickly what had really happened influenced the public opinion.

Abu Ziab stressed the need for practical measures to prevent the transfer of other properties in Jerusalem and for alternative ways to help the Palestinians, such as setting up a special fund to help Jerusalemites refrain from selling their properties. He said that the official institutions’ neglect and lack of will and strategy must end in order to prevent the situation from deteriorating in Jerusalem.