A Jordanian parliamentarian revealed forged documents notarized by a Jordanian lawyer to sell a Palestinian home in East Jerusalem to Israelis, raising the ire of Jordanians and Palestinians alike. 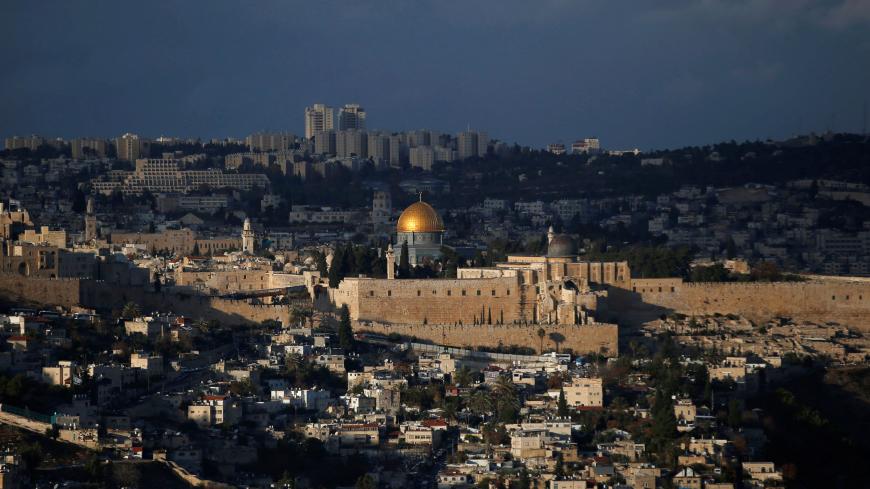 A general view of Jerusalem shows the Dome of the Rock, located in Jerusalem's Old City, Dec. 6, 2017. - REUTERS/Ronen Zvulun

An accusation that a popular Jordanian member of parliament made earlier this month in the legislature has left a strong impression on many officials. The accuser is Khalil Attiyeh, a parliamentarian of Palestinian origin who regularly chalks up some of the highest vote counts in the country.

During the Dec. 4 legislative session, held to discuss the 2019 annual budget, Attiyeh demanded that Prime Minister Omar Razzaz look into reports that a Jordanian notary public had certified the paperwork for the attempted sale of a Palestinian home in East Jerusalem to Israelis.

Attiyeh distributed to Razzaz and the media copies of the agreement, conducted on behalf of the seller through a power of attorney and allegedly notarized by a Jordanian lawyer. Razzaz issued a statement on Dec. 5 indicating that the documents in question had been forged.

Mohammad Bakirat, the grandson of the notary public in question, explained in a statement issued the same day that an ID that was published indeed belonged to his grandfather, but that he has been dead for decades.

Anis F. Kassim, editor of the Palestine Yearbook of International Law, told Al-Monitor that he is sure that the power of attorney was forged, given the legal language used. “Jordanian legal documents do not use such language,” he said.

Further, the Jordanian Foreign Ministry explained on Dec. 4 that Jordanians do not issue or notarize powers of attorney for the sale of land in Palestine because the Palestinian government is the competent agency for such documentation.

Nour al-Emmam, a Jordanian lawyer of Palestinian origin and a member of the Palestinian National Council (PNC), told Al-Monitor that the office of the PNC in Jordan is following up on the case with the relevant Palestinian officials in Palestine.

“When we realized that the national ID that was listed is not among the records of the Jordanian Bar Association, we immediately asked help from Palestinian officials in Ramallah, who assured us that this document is a forgery,” Emmam said.

Israeli media and officials have remained silent about the case, which has shocked the Jordanian public. Israel has previously been accused by Israeli and international human rights organizations of turning a blind eye to forgery cases involving property in order to ensure further Jewish settler control over the occupied territories.

A comprehensive Human Rights Watch report, “Occupation Inc.” (2016), details how fraudulent land sales are made and how the Israeli government turns a blind eye to such cases.

In 2006, the Associated Press conduced an in-depth investigation into how forged documents, including in the United States, are made to help facilitate the transfer of land from Palestinians to Israelis.

Attiyeh told Al-Monitor that he and Razzaz had meet in person and that he was satisfied with Razzaz's response. “I am now satisfied, but I plan to continue pursuing these cases with more specific questions to the government,” he said.

Khalil Assali, editor of the East Jerusalem-based website Akhbar el-Balad told Al-Monitor that the atmosphere in East Jerusalem is fraught. “The situation in Jerusalem is at a historic low, and because of the absence of political or social leadership, people have become very jittery and easily swayed to believe fake news,” he said.

Two months ago, Jerusalemites in the Old City were shocked to learn that a large four-story home not too far from Al-Aqsa Mosque that had belonged to a well-known Palestinian family, the Jodehs, had been secretly sold to a right-wing Jewish organization.

Kassim puts part of the blame on the Ramallah-based Palestinian Authority (PA). “The PA should do more to support the people of Jerusalem,” he said. “They should use the fact that 330,000 Palestinians live in Jerusalem and ensure that they have the tools needed to resist Israeli Judaization efforts.”

Israel has lately been active in trying to suppress local Palestinian leadership. Adnan Gaith, the PA-appointed Palestinian governor of Jerusalem, has been arrested multiple times in recent months for questioning concerning the apprehension of Palestinians involved in the sale of land to Jewish extremists. Gaith, after being detained in late November, was released Dec. 2 and ordered by the judge not to enter the West Bank for six months.

While the case that Attiyeh raised turned out to be a forgery, and no sale actually took place, the situation in Jerusalem, absent any ray of hope of a political settlement, is greatly contributing to the problems concerning property in Jerusalem.