Emir Tamim's surprise visit to Jordan last weekend may be an attempt to thaw ties between Doha and Amman. 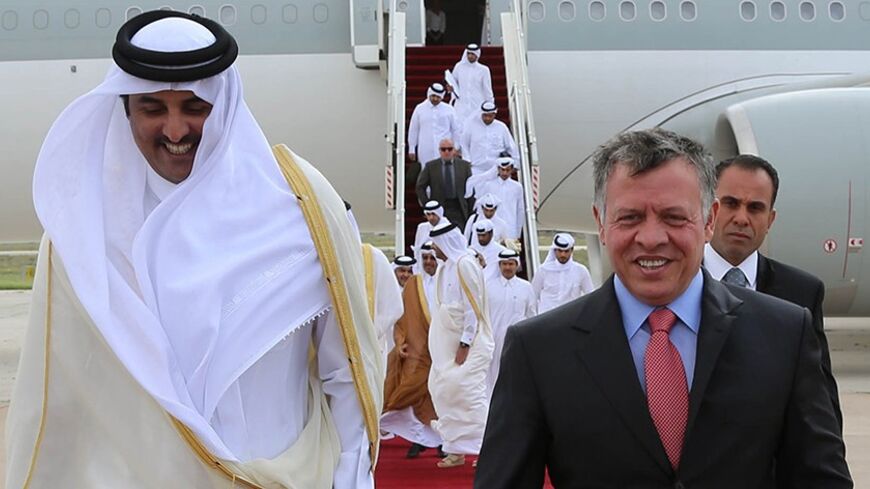 Emir of Qatar Sheikh Tamim bin Hamad Al Thani's sudden, short March 30 visit to Amman took Jordanians by surprise. It was announced only a day in advance, first by the Qataris and then by the Jordanian royal court. Its significance, for both sides, could not be ignored. This was the first trip to Jordan by the young emir since his father, Sheikh Hamad bin Khalifa Al Thani, abdicated last June. Relations between Amman and Doha have been tepid at best, and had seen many bad days since King Abdullah was crowned in 1999 following the death of his father King Hussein.

There have been attempts by King Abdullah to mend relations with Sheikh Hamad. But few are aware of the real reasons behind the tense relationship. One major diplomatic confrontation took place a few months after Abdullah assumed the throne. A face-off between the government and Hamas leaders based in Amman ended in their expulsion. Qatar stepped in to convince the Jordanian government to change its position. It failed to do so, and the expelled Hamas leaders were put on a Qatari plane headed for Doha.

That incident triggered what became known as the Jordan-Qatar dispute. There were additional reasons for it, but unlike the Qatar government, the Jordanian royal court avoided being dragged into a war of words. More often than not, the Doha-based Al Jazeera would launch attacks on the Jordanian leadership through documentaries and political talk shows hosting anti-government figures. The local media in Amman usually responded, but the palace would show tolerance and patience.

The Hamas file has resurfaced in the past few years. In 2012, then-Crown Prince Tamim came to Amman accompanied by expelled Hamas political bureau chief Khaled Meshaal, who is also a Jordanian national. The mission succeeded and Meshaal was allowed to visit Jordan on a number of occasions. But Jordan refused to reopen Hamas’ office in Amman or allow the expelled leaders to relocate there. Again, relations between Qatar and Jordan remained on edge.

Sunday’s visit by the Qatari emir may change that. It came as Doha was feeling increasingly isolated by its Gulf neighbors following the outbreak of a dispute with Saudi Arabia, the United Arab Emirates (UAE) and Bahrain. The three countries had pulled their ambassadors from the Qatari capital last month and rejected any mediation until Doha accedes to their demands. They want Qatar to adhere to commitments not to interfere in the internal affairs of its neighbors and stop its criticism of the new regime in Egypt. Qatar had become a hub for Muslim Brotherhood leaders, who often appear on Al Jazeera criticizing Egypt’s new leadership and the countries that support it, like Saudi Arabia and the UAE. Qatar has so far rejected these demands.

By visiting Jordan — he will later visit Sudan and Tunisia — the young emir is looking for ways to demonstrate that Doha is not isolated and that it still has friends in the Arab world. But this is not the message that Jordanians want their Saudi and other Gulf allies to receive.

Jordan had expressed its displeasure with the recent Gulf dispute while insisting on neutrality, and unconfirmed reports spoke of a possible Jordanian mediation to resolve the matter. But Jordanian officials would not confirm whether Jordan was still ready to intervene. Former chief of the royal court and veteran Jordanian politician Adnan Abu Odeh told Al-Monitor, “Jordan can play a positive [role] in Gulf reconciliation, and its role is appreciated by all parties.” He added that the visit will enhance bilateral relations and open the door to receiving more Jordanian workers in Qatar.

Information about what the two leaders discussed is scarce. The official statement by the royal palace said bilateral relations and current regional and international issues were reviewed. But Asharq Al Awsat quoted informed Jordanian sources as saying the results of the visit would become clearer in the coming few days. Doha is expected to renew its commitment to the five-year Gulf Cooperation Council's $5 billion grant to Jordan, of which Qatar will pay $1.25 billion. The grant was approved in 2011, but Qatar had failed to pay its share until now. The newspaper reported that Jordan will send envoys to Saudi Arabia, the UAE and Bahrain soon to “improve relations with Qatar.”

But a journalist covering the visit told Al-Monitor that the issue of Hamas was also discussed. He pointed to the fact that the high-level meeting was attended by Prince Ali bin Al Hussein, the king’s half-brother, who is said to be handling the Hamas file on the Jordanian side. A March 31 Al-Monitor report spoke of attempts by Hamas to end its political isolation by opening up to Jordan. The report said that Hamas wants to relocate its political bureau to the Jordanian capital, while the Middle East Monitor reported that Sheikh Tamim had tried to persuade Amman to reopen Hamas offices.

Jordanian news site El Maqar reported that the talks addressed the Syrian issue as well. Jordan has denied facilitating the passage of weapons from Gulf countries into Syria. Qatar is one of the main backers of the Syrian opposition and has called for arming the rebels.

Whatever the Qatari motives were behind this visit, Jordan could not have prevented it. Amman has always relied on Gulf financial support and job markets for its citizens. Historically, relations between Amman and Doha were close. Many Jordanians assumed senior administrative posts in the Qatari government in the early 1960s through the mid-1990s. There are about 27,000 Jordanians working in Qatar today.

Jordanian Minister of Political Affairs Khaled al-Kalaldeh told Al-Monitor that the visit had been planned for some time, before the eruption of the Gulf dispute. He added that Jordan’s “transparent position on issues qualifies it to play a positive role with its Arab brethren.”

But King Abdullah also knows that he cannot compromise the strong relations between Jordan and other Gulf countries, especially Saudi Arabia. This is why few details were released about the short visit, and the royal court’s description of talks was carefully worded. One political researcher who did not want to be named said that Jordan, which belongs to a moderate political axis led by Saudi Arabia and Egypt, sees things differently from Qatar and Turkey, which support political Islam. He told Al-Monitor, “Jordan should be careful not to sacrifice its vital relations with Saudi Arabia and the UAE in light of this recent visit.”

For now, Jordan will be content to see a thaw in relations with Qatar as long as that does not come at the expense of its special ties with other Gulf countries.