Saudi Arabia's three summits last week made for impressive imagery, but the unity they projected was superficial. 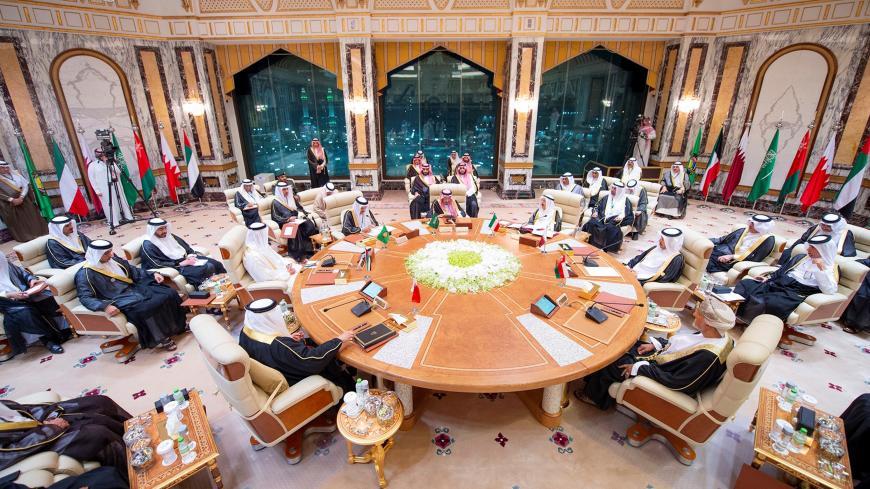 A general view of the Gulf Cooperation Council summit is seen in Mecca, Saudi Arabia, May 30, 2019. - Bandar Algaloud/Saudi Royal Court/REUTERS

Saudi Arabia’s King Salman hosted three summits last week in an impressive display of the kingdom’s convening power. The Saudis won endorsement for their isolation of the Houthis but no practical support for the war in Yemen. Their main goal, confronting Iran, was undermined by defections from their camp. The Palestinians may be the biggest winner, as the one area of agreement was support for the two-state solution and condemnation of the US administration's policy on Palestine and Jerusalem.

The king convened consecutive summits of the Gulf Cooperation Council, the Arab League and the Organization of Islamic Cooperation in Mecca. Turnout was mixed. Morocco’s King Muhammad VI, Turkey's President Recep Tayyip Erdogan and Oman’s Sultan Qaboos sent deputies, as did the emir of Qatar. Though the Qatari representative briefly shook hands with Saudi Crown Prince Muhammad bin Salman, the blockade on Qatar was not lifted.

The GCC and Arab League communiques were harsh to the Iranians, condemning them for supporting groups like the Houthis. But Iraq disassociated itself from the statements. President Barham Salih noted that Iraq shares a 1,400-kilometer (870-mile) border with Iran and many social and economic ties. He warned that the growing tensions between Iran and the Saudis and Washington are very dangerous for the entire region. The Kuwaitis expressed concern about the risks of confrontation and sectarian violence although they were careful to adhere to the Saudi line.

Jordan’s King Abdullah backed the need for Gulf security and condemned the recent attacks on oil tankers in the Emirati port of Fujairah. But the king stressed that the greatest danger to regional stability is the Israeli occupation of the West Bank and said there is an urgent need for a political solution to the Palestinian problem, an implicit rejection of the Donald Trump administration's efforts in that regard.

The OIC communique primarily focused on the Israel-Palestinian issue. It reaffirmed the 57-member OIC’s commitment to the Arab Peace Initiative, with an independent Palestine within the 1967 borders and a capital in Jerusalem. It condemned the Trump administration for moving the US Embassy to Jerusalem and for accepting the Israeli annexation of the Golan Heights.

King Salman reiterated these positions in his remarks to the summit, saying Jerusalem is a top priority. The king's position on Jerusalem and a two-state solution is popular with the Wahhabi clergy and the general public. No mention was made in the communique about the economic workshop Trump is promoting in Bahrain later this month. The Saudis are attending the Manama workshop, but the king has strongly and repeatedly affirmed the importance of Jerusalem as the future capital of Palestine. The OIC effectively rejected the administration's so-called “deal of the century” before it is unveiled.

The Saudis got their strongest endorsement in the Arab League condemnation of the Zaydi Shiite Houthis and their drone and missile attacks on Saudi targets. The communique blamed Iran for providing the Houthis with missiles, interfering in Bahrain and keeping three islands in the Gulf claimed by the UAE. Of course, ganging up on the Houthis, who are not very accomplished at diplomacy, is easy.

But there was no practical support for the four-and-a-half-year-old Saudi intervention in Yemen. Arab support for military operations in Yemen has steadily declined from the beginning of the war, as Jordan, Morocco and others have quietly dropped out. Aside from the Saudis and Emiratis, the largest Arab contingent now is several thousand Sudanese mercenaries. Pakistan has consistently reaffirmed its unwillingness to send troops and Prime Minister Imran Khan focused his OIC remarks on condemning Islamophobia, another rebuke of the Trump administration.

The Saudis are skilled at this summitry, and Mecca provides a unique venue for Islamic and Arab meetings. But the results are usually meager restatements of old formulas, and this time was no different. The illusion of unity masked deeply divided Gulf, Arab and Islamic worlds.