Israel keeps silent while Iranian President Hassan Rouhani signs onto the resolution of the Organization of Islamic Cooperation supporting Israeli-Palestinian peace based on a two-state solution. 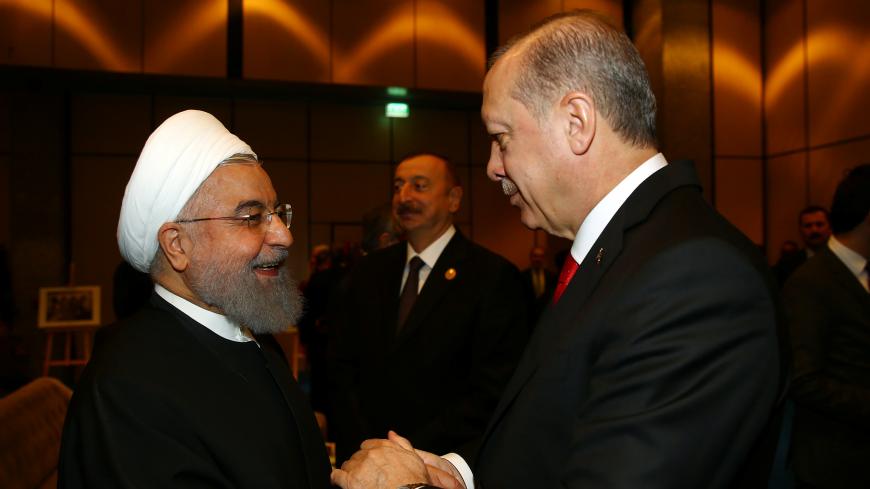 The following lines are not the fruit of an overactive imagination or the result of typos. They are taken from a document signed Dec. 13 in Istanbul by leaders of the Organization of Islamic Cooperation (OIC), among them Iranian President Hassan Rouhani. The leaders expressed support for an “independent and sovereign Palestinian State on the borders of 4 June 1967,” and reaffirmed their “attachment to the just and comprehensive peace based on the two-state solution with east Jerusalem as the capital of the State of Palestine … consistent with … the 2002 Arab Peace Initiative adopted by the Extraordinary Islamic Summit Conference in 2005 as a strategic choice.” According to their resolution, US recognition of Jerusalem as the capital of Israel thus violates “the foundations of the peace process that stipulate that City of Al-Quds Al-Sharif as a final status issue …”

In addition to the protest against US President Donald Trump’s controversial Jerusalem declaration, the leaders decided to ratify the OIC support for the Arab Peace Initiative, which promises normalization of ties with Israel in return for a withdrawal to its 1967 borders. Along with a tirade against “colonialism, settlement, apartheid and the ethnic cleansing it has been practicing in the occupied Palestinian territory in 1967,” the communique of the Istanbul summit recognizes Israel within the borders that existed before it occupied the West Bank 50 years ago.

In 2005, when the OIC voted in favor of the Arab Peace Initiative, Iran abstained. As of now, Iran is a signatory of a summit communique and detailed summit resolutions directly pertaining to two states — Israel and Palestine — as the only solution to the Israeli-Palestinian conflict, and declaring East Jerusalem as the Palestinian capital. The term “East Jerusalem” — as opposed to Israel’s insistence on a united Jerusalem that includes its western and eastern sections — appears in the official summit documents no fewer than seven times. There was good reason Turkish President Recep Tayyip Erdogan, the summit host, declared its resolution “historic.”

Paradoxically, while the Saudi crown prince seems to be disowning the Arab initiative sponsored since 2002 by his own country, by presenting to Palestinian President Mahmoud Abbas the "Trump peace plan," Iran is publicly accepting it. Rouhani’s support of the Arab Peace Initiative obviously does not stem from any special love for Israel. An intelligence researcher told Al-Monitor on condition of anonymity that the position presented by Rouhani in Istanbul coincides with the increasingly spreading protest in Iranian streets against the large budgets fueled by Iran to Syria, to Hezbollah and to Gaza-based terror groups. He claims that Rouhani objects to the adventurous diplomatic policy of the Islamic Revolutionary Guard Corps, under the leadership of Qasem Soleimani. The source recalled that it was Rouhani who led to the signature of the Iran nuclear deal with the world powers, which subsequently reduced sanctions against Iran.

The absurd expectation in Jerusalem that Saudi Arabia would open its gates to Israel, which locks the gates to a permanent peace agreement with the Palestinians, enables Iran for the moment to dance at two weddings: In the morning it tangoes with Hamas and Hezbollah and expresses reservations about the summit resolution, and in the evening it invites Abbas to visit Tehran. In between, Rouhani takes time to condemn “several states in our region aligned with the United States and the Zionists.” The efforts that Israel invests in its occupation enterprise and in frittering away prospects for peace enable Iran to integrate into the Arab and Muslim club without paying Israel any membership dues.

Several days after the Islamic summit resolution was adopted, on Dec. 20, Israel’s public broadcaster Kan reported about a closed meeting of the Knesset’s Foreign Affairs and Defense Committee. According to the report, the committee’s chairman Avi Dichter of the Likud Party refuted rumors about a rapprochement between Israel and moderate Arab states. He spoke in response to the results of a Palestinian Research Center survey indicating that most Palestinian residents of the Israeli-occupied territories believe Israel has ties not only with Egypt and Jordan, the only two Arab states that signed a peace agreement with the Jewish state. Seven of 10 respondents believe Israel has an alliance with Saudi Arabia and the Gulf states, Morocco, Algeria and Tunisia. “Of course it’s nonsense,” Dichter reassured his listeners, “there’s no alliance and nothing like it.” It is no secret that in return for ties with pragmatic Arab states Israel would have to pay with territorial withdrawal, a currency not recognized by Israelis who vote for Dichter and company. The committee chairman — and former Shin Bet security agency chief — did not inform participants at the meeting about the Istanbul summit resolution. Israeli media could not find any room for such good news, either.

The Arab media did not seem interested in Iran’s support for the Arab Peace Initiative, either. Palestinian journalist Daoud Kuttab, writing for Al-Monitor, chose instead to underscore the disappointing turnout, with only 16 heads of state taking part in the summit, and no more than 30 OIC member states sending representatives. He cited Palestinian analysts who focused on the tensions evident at the summit within the Arab and Muslim world and the pessimistic atmosphere that prevailed. Ali Abunimah, the co-founder of the Electronic Intifada, lashed out at Arab leaders “for wasting everyone’s time,” Kuttab wrote.

No one in Israel wasted time on the summit communique and on the Iranian support for the Arab Peace Initiative. Jerusalem is no longer interested in good news from the neighborhood. The prime time Channel 10 evening news led off on Dec. 28 with an exclusive report about “dramatic diplomatic understandings” between Israel and the United States, designed to block Iranian expansion in the Middle East. Diplomatic affairs correspondent Barak Ravid reported that at a secret White House meeting, senior Israeli and American defense officials reached understandings regarding the strategy and policy required vis-a-vis Iran. “Policy required” is synonymous with “preparation for war.” Peace, in any case, would follow afterward.

When Ahed Tamimi, a 16-year-old Palestinian girl, slapped and kicked two Israeli soldiers near her home in the West Bank, news outlets and the public could not get enough of the story. Israeli security forces rushed to detain the girl, and brought her before a military judge to extend her remand. When a rocket fired from Gaza lands on the outskirts of the southern town of Sderot, air force planes scrambled to bomb the launch sites in Gaza. When an Islamic summit, in the presence of the president of Iran, declares recognition of Israel coexisting peacefully side by side with a Palestinian state with its capital in East Jerusalem, West Jerusalem is in no hurry to go anywhere.

More accurately, Jerusalem is heading backward rapidly. The Muslim and Arab worlds, including Iran, reaffirmed their commitment to the two-state solution as a response to Trump’s Jerusalem proclamation. But the Netanyahu government reacted to the proclamation crisis by running away from the two-state solution. In fact, the Israeli government continued to evoke West Bank annexation ideas, as a means to eliminate this solution.