Europe might step in if Trump's Mideast initiative fails

If the Middle East initiative of US President Donald Trump fails, French President Emmanuel Macron could launch his own initiative for a two-state solution in 2018. 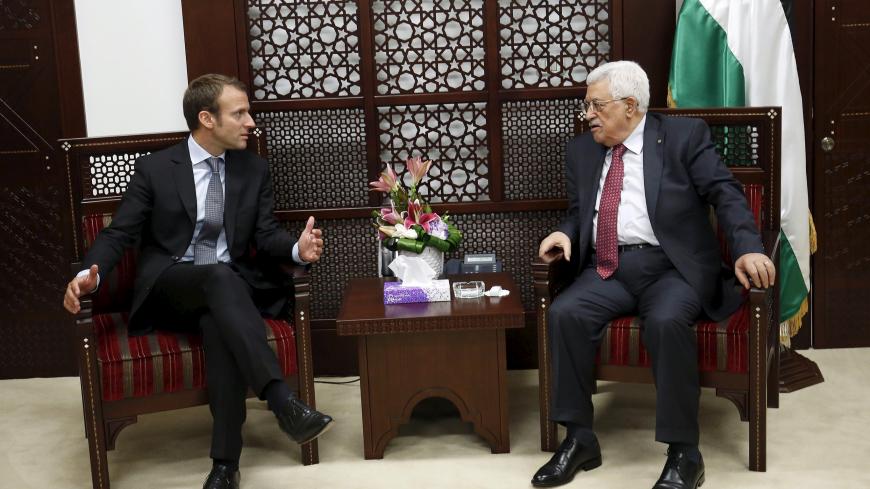 Rarely in recent years has there been so little talk in international corridors on Europe's role in the Middle East. With the Trump administration distancing itself from Brussels, the European Union (EU) has become isolated, and its worldwide influence has been weakened. In fact, US President Donald Trump is not hiding his disrespect for the EU and most of its leaders. He minced no words when talking of British Prime Minister Theresa May, despite his support of Brexit. The same — and more — is true regarding German Chancellor Angela Merkel, over her immigration policies.

A senior source close to Federica Mogherini, the EU's high representative for foreign affairs and security policy, told Al-Monitor that Mogherini maintains ongoing contact with US Secretary of State Rex Tillerson, including on Middle Eastern issues. Still, it seems that the administration only partially shares Trump’s policy initiatives with her. Trump's proclamation on Jerusalem certainly came as an unpleasant surprise. In fact, Mogherini had conveyed in recent weeks to Washington the EU's support of a US initiative for regional cooperation, as long as it does not harm the Iranian nuclear deal, and as long as it favors an Israeli-Palestinian peace in the form of a two-state solution. Mogherini had also conveyed Europe's strong objections to any new US policy on Jerusalem that could destabilize the region. In her chilly looking meeting with Tillerson in Brussels on Dec. 5, Mogherini reiterated Europe's objection to recognizing Jerusalem as Israel's capital. After Trump's proclamation, Mogherini was quick to state, "The European Union expresses serious concern about today’s announcement by the United States President Trump on Jerusalem and the repercussions this may have on the prospect of peace.''

The EU had also been warning both Washington and Jerusalem against settlement expansion in the West Bank. According to the senior official, Brussels is quietly supporting the Palestinian reconciliation agreement, and is in constant contact with Ramallah in order to sustain the Abbas regime. Europe has actually increased its economic assistance both to the West Bank and Gaza Strip. Speaking on condition of anonymity, the official said, “There is indeed an opportunity to advance an Israeli-Palestinian two-state solution process, especially given the changes in Saudi Arabia for a more moderate Islam and Saudi pride over the Arab Peace Initiative of 2002. We will support a Trump initiative in this direction. But if it fails, 2018 may very well witness an EU regional initiative, because the Israeli-Palestinian status quo cannot be sustained.”

A senior French Quai d’Orsay official echoed the view of the Brussels headquarters. French President Emmanuel Macron is the European leader closest to Trump. Macron decided early on in his presidency to keep an open line of communication with Trump, also on issues of disagreement such as the Paris climate agreement and the value of the Iran nuclear deal. The French president, argued the diplomat, toes the line with Washington on an anti-Islamic terror policy. Macron visited Riyadh on Nov. 9 and coordinated with Saudi Crown Prince Mohammed bin Salman policies against radical terror, also in Lebanon and in Europe.

On the Israeli-Palestinian issue, Macron is letting Trump lead the way, for the moment at least. Macron is not following up on the Paris peace conferences on a two-state solution initiated by his predecessor Francois Hollande. Still, Macron's administration has espoused traditional French policy guidelines on a two-state solution. But while letting Trump go ahead with his Middle East initiative, Macron expressed his clear-cut objection to the Jerusalem proclamation, saying in a statement, "Jerusalem: France does not approve the US decision. France supports the two-state solution, Israel and Palestine living in peace and security, with Jerusalem as the capital of both states." He added that conciliation and dialogue need to be fostered.

Macron may become more active on the issue in 2018. He is planning this coming spring to visit Israel, the Palestinian Authority, Jordan and Lebanon. The official emphasized that the positions Macron will relate in advance to Israeli Prime Minister Benjamin Netanyahu, Palestinian President Mahmoud Abbas and Jordan's King Abdullah are that the only solution to the issue is a two-state solution; that the 2002 Arab Peace Initiative should be the basis of such a peace process; and that Israel’s security must be guaranteed in any such solution, also through regional anti-terror cooperation. Macron sees in Jerusalem the capital for two states. More so. The French president spoke to Trump on the phone Dec. 4, expressing his concern over the possibility of the United States recognizing Jerusalem as Israel's capital.

It seems that the prevailing approach both in Brussels and in Paris up until this weekend was “give Trump a chance.” The Jerusalem issue might alter this policy motto. But with or without that, in case of disappointment over the US initiative, the EU may be the one initiating. And if so, France would probably take the lead.

A senior PLO official close to Abbas told Al-Monitor on condition of anonymity that the Palestinian president is in close contact with the heads of the EU and is hoping for a European initiative, as he believes that Washington’s policies are tilted toward Israel.

A senior Israeli Foreign Ministry official reacted to these European statements with usual cynicism, saying on condition of anonymity that “as far as Israel is concerned, the only international player present in the Israeli-Palestinian field — be it this year, next year or thereafter — is the United States.”