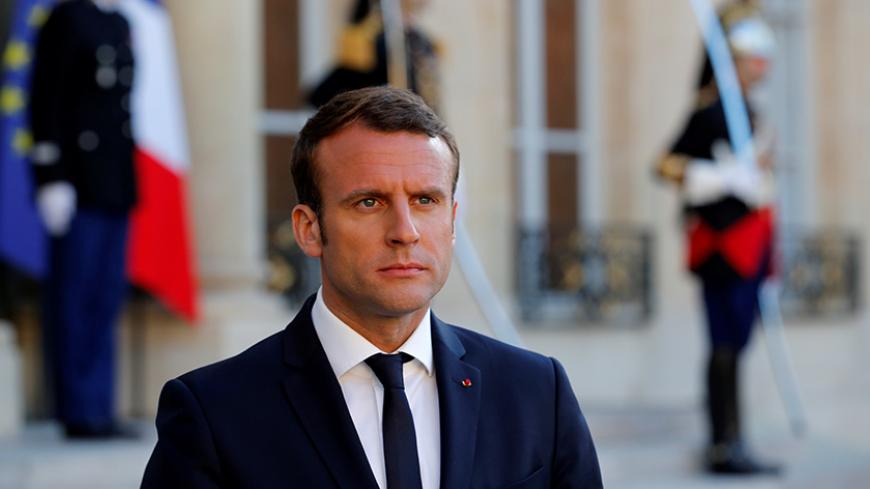 French President Emmanuel Macron attends a meeting at the Elysee Palace in Paris, May 21, 2017. - REUTERS/Philippe Wojazer

There was a sigh of relief across European Union member states when Emmanuel Macron was declared the next president of France on May 7. The wave of right-wing anti-globalization and anti-EU that began with the Brexit vote in the United Kingdom and continued with the election of Donald Trump as US president was stopped by the French electorate. The 39-year-old French centrist politician, a former member of the socialist government and who was the most pro-EU candidate, marched to his victory speech at the Louvre Museum to the tune of the EU anthem.

For the first time since the election of Francois Hollande in 2012, France was hailed in liberal circles across the world and by all governments interested in EU continued stability. Yet there were two noteworthy exceptions. Trump was probably not overjoyed on Macron’s victory; only two weeks before the French election he tweeted that extreme right National Front Marine Le Pen was the strongest candidate on immigration and French border topics. In Israel, Prime Minister Benjamin Netanyahu preferred a Macron victory over Le Pen, a candidate whose party has anti-Semitic roots, but according to a senior Israeli Ministry of Foreign Affairs official, Jerusalem is concerned with a strong French president espousing foreign policy ambitions who may want to set in motion a new French initiative on a two-state solution.

Following the May 20-23 Trump visit to the region, it is clear to Israel that the quartet framework of the EU, United States, United Nations and Russia will not be renewed. In fact, EU leadership in Brussels considers itself as part of the victorious side in these French elections and is planning to fortify a more independent European foreign policy in the weeks to come. A senior official close to Federica Mogherini, the EU high representative for foreign affairs and security policy, told Al-Monitor that Mogherini is in contact with French Foreign Minister Jean-Yves Le Drian to advance a strong common European foreign policy on several files. The new man at the Quai d’Orsay is an old hand on French security and foreign affairs. He served as Hollande’s minister of defense, and he was very much in favor of a forceful and ambitious French intervention with the US-led coalition against the Islamic State (IS). In this context, he enjoys good relations with the leaders of the pragmatic Arab countries — Egypt, Jordan and the Gulf states. He particularly enjoys a close relationship with King Abdullah II of Jordan.

As Cabinet minister, Macron backed the two Paris conferences for a two-state solution and the French policy on the illegality of Israeli settlements. According to the EU official, Mogherini discussed with Macron the revival of these EU policies, especially now that the United States is proceeding on the Israeli-Palestinian issue with very little coordination with Europe. In his first speech as president, Macron emphasized France’s leading role in Europe and the world. He is a fervent supporter of globalization and therefore in favor of collective diplomacy.

A senior adviser to the French president on economic affairs told Al-Monitor that Macron, who to him is a brilliant operational conceptualist, will with time surprise the world with French initiatives on the Middle East. On foreign policy, Macron will want to be the world leader on climate change. These ambitions were reflected at the May 27 G-7 meeting in Italy, where he attempted to convince Trump not to abandon the Paris COP21 climate agreement.

According to Macron’s adviser, the president’s first priority in the Middle East is the fight against IS and radical Islam and to strengthen civil society in Iraq and Syria. Another Macron priority is the unity of Lebanon, restraining Hezbollah’s ambitions to fully control the country. The French president will also focus on upholding the Iran nuclear deal. On the Israeli-Palestinian conflict, Macron aspires to engage with Israel and the Palestinian Authority, as well as with the leaders of Egypt, Jordan and Saudi Arabia, on a two-state solution based on the 2002 Arab Peace Initiative and opposing the expansion of settlements.

Macron emphasized these views on the Israeli-Palestinian issue in a meeting he had in September 2015 with late Israeli President Shimon Peres. According to a former Peres adviser who was present at the meeting, Macron emphasized to Peres that he perceives himself as a staunch friend of Israel, he strongly opposes the boycott, divestment and sanctions movement, and for Israel’s sake, favors a two-state solution based on the 1967 lines.