What Netanyahu told Macron in Paris 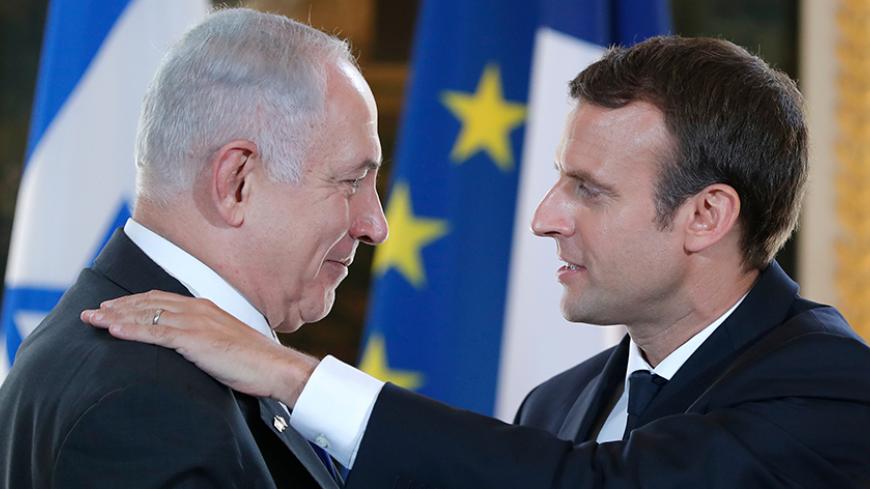 PARIS — French President Emmanuel Macron got a fair share of Prime Minister Benjamin Netanyahu’s time on July 16. The two men participated in a ceremony marking 75 years since the Vel’ d’Hiv Roundup of French Jews during World War II. They then had a two-hour meeting at the Elysee Palace.

The parameters of the Netanyahu-Macron Elysee rendezvous resembled those of Macron’s July 5 meeting with Palestinian President Mahmoud Abbas: a face-to-face meeting followed by declarations to the press. The media were there to record and publish only; no questions were allowed. The same was true with Netanyahu. Macron read his statement, Netanyahu said what he had to say. End of story.

Still, diplomatic sources describe a much longer meeting than originally scheduled, where Netanyahu spoke at length and Macron mostly listened. But from Macron’s responses, and also from his silence on some of the matters, there is a lot to learn.

Up until now, Macron’s stance on the resolution to the Israeli-Palestinian conflict was vague. Or, more precisely, generalized. He had reiterated several times France’s traditional positions in favor of a two-state solution, with Israel and Palestine living side by side in peace and security, and against settlement construction. At the same time, he was careful not to engage explicitly in the Paris 1 and Paris 2 Middle East Peace conferences, initiated by Macron’s predecessor Francois Hollande. Nor did he offer any new French initiative to relaunch Israeli-Palestinian talks. It seems that Macron prefers to wait and see in which direction the initiative introduced by US President Donald Trump progresses before jumping into the Israeli-Palestinian quagmire.

Yet Macron’s Middle East strategy has another side to it. Paris is trying to identify areas where it could score points quickly. One example is the case with the Qatar crisis. French Foreign Minister Jean-Yves Le Drian visited Qatar, Saudi Arabia, Kuwait and the UAE July 15-16 in an effort to facilitate a resolution to the rift. A source at the Quai d’Orsay French Foreign Ministry explained to Al-Monitor on condition of anonymity that the minister felt France could play a constructive role in mediating an agreement between the sides.

Similarly, Macron’s team has identified the issue of Lebanon as an area were France could offer Israel an added value. France’s relations, past and present, with the Lebanese government are strong and multifaceted. Macron even visited Beirut in January while campaigning. Speaking to the press on July 16, Macron said that he shares “Israeli concerns on the arming of Hezbollah in southern Lebanon. We seek Lebanon's stability with due regard to all minorities."

In his briefing to Israeli journalists later that day, Netanyahu echoed Macron’s remark by saying, “France has special ties with the Lebanese government, and Macron has the possibility of dialoguing with the [Saad] Hariri government on the issue of Hezbollah.” Netanyahu added that he expressed in the meeting Israel’s deep concerns over Hezbollah’s presence in Lebanon and its rearming with weapons that, in part, might be manufactured in the country.

The two-hour meeting between the two leaders included a detailed discussion about Syria and other regional threats, with Netanyahu explaining to Macron how Israel views the regional balance of power. And while the Israeli-Palestinian conflict was, and is, still at the heart of the Israeli-French dialogue, Macron and Netanyahu dedicated much time to other topics.

So which direction will Macron choose on Israel? According to his associates, Macron does not intend for the moment to propose a Paris 3 Conference or any other sort of diplomatic initiative, especially not before the September UN General Assembly annual meeting, and not before Trump gets a shot at advancing talks.

Sources at the Quai d’Orsay told Al-Monitor that while the US State Department never refused, when asked, to update the French Embassy in Washington on their ongoing contacts in the region, the updating was always solicited. The State Department does not update its European counterparts regularly each time that US envoy Jason Greenblatt comes back from another round of regional consultations. For the moment, this seems to suit both sides. The French have decided to wait and see what happens with Trump’s initiative. They will decide about their next step after.

Since he has currently little to offer Netanyahu on that front, Macron opted for the value-added approach of hand-picking defined topics where he is likely to succeed.

Macron’s announcement at the joint press conference about his economy minister visiting Israel in the near future followed that line. In fact, when Macron announced the visit, the date had already been set to mid-September. Maybe this was why Economy Minister Bruno Le Maire participated at the Vel d’Hiv commemoration that same morning. Macron has registered him as a “value-added asset” in his relationship with Netanyahu.

To crown the warm welcoming of Netanyahu in Paris, Macron also announced that he will visit Israel in the coming months, at Netanyahu’s invitation. Like Le Maire’s scheduled visit, this announcement was made with a date already in mind: at the beginning of 2018 when France and Israel will celebrate cross-cultural seasons. Undoubtedly, Macron will also visit Ramallah on that occasion, but media attention will be on the Israeli part of the presidential trip.

However, Macron’s warm welcome of Netanyahu shouldn’t fool Jerusalem. France has no intention of backing away from criticizing settlement construction, nor will it renounce the quest for two states — Israel and Palestine, with Jerusalem as a shared capital. The fact that Macron listened politely and diplomatically to Netanyahu does not mean that he agreed with every word said by his Israeli counterpart. Far from it.