Abbas not adopting Turkish rage against US 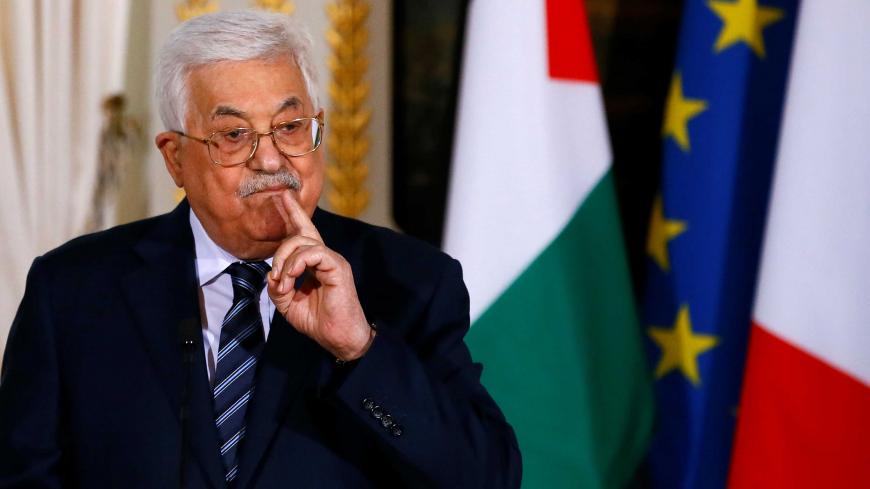 President Donald Trump’s Dec. 6 decision on Jerusalem is considered in Ramallah to be a major setback for what was until now a potential diplomatic track toward Palestinian statehood. Palestinian President Mahmoud Abbas was in contact with the Arab League and personally addressed the summit of Muslim leaders in Istanbul on Dec. 13, expressing his concerns and anger over the US decision. But realists in the Palestinian leadership understand that, so far, these reactions were only of rhetorical value. Abbas has little leverage, while Hamas has been strengthened.

After the meeting in Istanbul, Saudi Crown Prince Mohammed bin Salman invited Abbas to Saudi Arabia. According to a senior Israeli Foreign Ministry policy analyst, the Saudis were irritated by the harsh anti-American tone adopted at the Istanbul conference, which was chaired by Turkish President Recep Tayyip Erdogan, in the presence of Iranian leadership.

Two weeks ago, just a day after the Jerusalem proclamation, the Saudi leader met with a group of American foreign policy analysts in Riyadh. According to one of the participants, the prince hardly mentioned the proclamation in his comments, except to reiterate the Saudi position on East Jerusalem as the Palestinian capital. He was outspokenly pro-American, and he did not rule out cooperation with Israel once a solution to the Palestinian issue is reached based on the 2002 Arab Peace Initiative.

The Israeli analyst believes that the new Saudi leadership was not really shocked by Trump’s decision, as it maintains regular contact with the White House. The Saudi crown prince would like to see a revival of the US Peace Initiative, once the storm over the proclamation cools down. He would like the Palestinians to renew contact with US envoys on the American peace initiative, which the Saudis consider to be more balanced than Abbas believes. In fact, the Saudi leadership traditionally believes in gradual progress, thus favoring a long-term interim agreement between Israel and the Palestinians, leading to Palestinian statehood.

A senior PLO official close to Abbas told Al-Monitor that Riyadh is changing policy. The enemy for Saudi Arabia is Iran, not Israel. And a strategic partnership with Washington is of prime interest.

The senior PLO official said that Abbas is very open to the advice of the crown prince and Egyptian President Abdel Fattah al-Sisi. Cairo would like to see continued implementation of the Fatah-Hamas reconciliation agreement in order to curb Iranian influence in Gaza. Despite Trump’s Jerusalem declaration, Egypt intends to maintain good relations with Washington.

While Abbas listens to his Arab partners, including Jordanian King Abdullah II, he will not surrender on the traditional Palestinian position regarding any future negotiations with Israel. The Palestinian president conveyed to his counterparts in Cairo, Amman and Riyadh that any negotiations with Israel must be based on the 2002 Arab Peace Initiative, including a state based on the 1967 lines with East Jerusalem as a capital (with minimal and parallel land swaps).

In his talks, Abbas stressed that given the Jerusalem declaration, the Palestinians will now insist that the first point to be addressed in any eventual negotiations will be borders, including the border between West and East Jerusalem, based on the 1967 lines. International recognition would be based on the Yasser Arafat-Yitzhak Rabin exchange of letters of 1993. On the issue of security arrangements for both sides, Abbas said that these must include regional participation, without an Israeli military presence in the Palestinian state, which would be demilitarized.

Another point reiterated by Abbas was that the right of return of Palestinian refugees will be based on the Arab Peace Initiative principle, stipulating the necessity of a just and agreed-upon solution based on General Assembly Resolution 194. He also supported Israeli-Arab cooperation based on the Arab Peace Initiative, and he mentioned the necessity of major economic assistance for Palestinian state building.

Indeed, despite its almost desperate frustrations, the Palestinian leadership in Ramallah is still siding with the pragmatic Sunni states rather than the “Istanbul coalition,” which includes Iran. But while the Palestinian demands may be to a large degree accepted by Egypt, Jordan and Saudi Arabia, it is very unlikely that Washington will adopt anything close to these positions. More so, Israel would never accept these as a basis for negotiations.

On the horizon, there is only political stalemate, and the ever-present possibility of a violent outbreak seems even greater at the moment.