Following the UN vote against Donald Trump’s Jerusalem proclamation, the Palestinians are taking advantage of the diplomatic momentum to advance the two-state solution; however, without strong backing from the international community, the door will be left open for a religious war instigated by Iran and its allies. 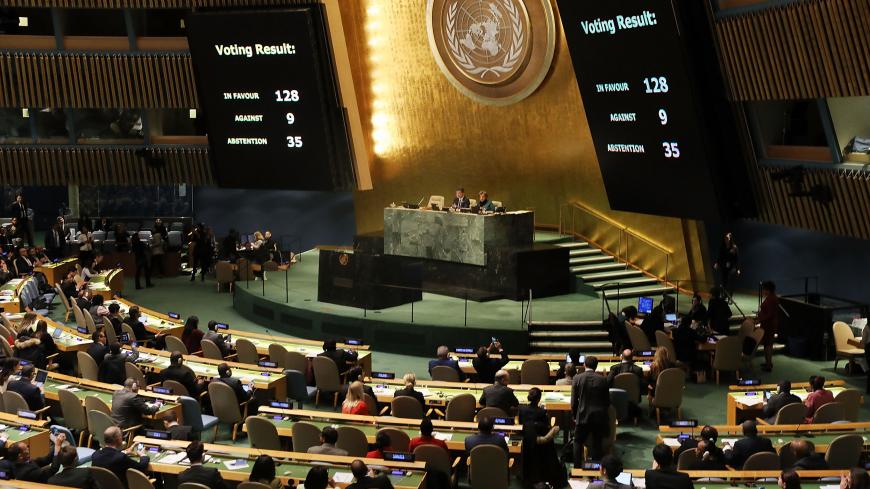 The voting results are displayed on the floor of the UN General Assembly in which the United States’ declaration of Jerusalem as Israel's capital was declared “null and void,” New York, Dec. 21, 2017. - Spencer Platt/Getty Images

In Ramallah, no Champagne bottles were opened after the Dec. 21 United Nations vote against US President Donald Trump’s decision to recognize Jerusalem as Israel’s capital. Still, there was a sigh of relief, as the threat by the president to cut aid to countries voting against him did not work. At most, half a dozen countries did not show up because of the American threat. The Palestinian leadership was pleased with the supporting votes of France, Germany and the United Kingdom.

A senior PLO official close to Palestinian President Mahmoud Abbas told Al-Monitor that Abbas considers the UN vote as a victory for Palestinian diplomacy. For Abbas, the vote reflected prevailing global consensus that the Palestinian capital will be East Jerusalem, and that the borders of the Palestinian state will be based on the 1967 lines. Only seven countries besides the United States and Israel voted opposed, and most of those countries are island nations in the Pacific Ocean. The United States and Israel were isolated as never before in their positions against the two-state solution.

The Palestinian leader, explains the source, was grateful for the European Union commitment to back a Palestinian capital in East Jerusalem, and for supporting not only two states for two peoples, but also two capitals in Jerusalem.

Abbas was also pleased with the intense Arab diplomatic activity in favor of the anti-Trump resolution by Egypt, Jordan and Saudi Arabia.

The senior PLO official said that the Palestinian leadership drew several conclusions in the aftermath of the General Assembly decision.

Ramallah agreed to continue the “Days of Rage” every Friday in a nonviolent manner in East Jerusalem. Abbas objects to Hamas' call for a new intifada.

The Palestinian leaders reiterated their decision after Trump’s proclamation to halt all contacts with the US administration on an eventual US peace initiative as it would reflect merely pro-Israel positions. Therefore, no meeting took place with US envoy Jason Greenblatt, who arrived in Israel on Dec. 20 for a visit of several days. The Palestinians announced that they would not meet with Vice President Mike Pence (who decided eventually to postpone his regional visit until mid-January).

In addition to these decisions, Ramallah is now busy contacting leaderships in Cairo, Amman and Riyadh to take advantage of the diplomatic momentum and pass international resolutions for a two-state solution based on the 2002 Arab Peace Initiative.

Abbas raised that same issue in his Dec. 22 meeting in Paris with French President Emmanuel Macron. In fact, the relationship between Ramallah and Paris has been strengthened due to Macron’s firm stance against Trump on the Jerusalem issue. Macron is expected in the region in the spring.

A policy idea that was raised in the Ramallah consultations is to convene, under UN auspices, a high-powered forum for launching negotiations on the two-state solution. The forum would likely be composed of four of the five permanent members of the Security Council (the United States would be invited, but is not considered likely to attend) and Germany.

Diplomatic messages along these lines were conveyed also to Moscow and Beijing, “If global climate can be saved without the US, the Palestinian issue can also be solved,” the Palestinian source said on condition of anonymity. He warned that if the international community does not engage in a realistic diplomatic initiative (whether the United States is involved or not), the door will be left open for a religious war instigated by Iran and its allies Hezbollah and Hamas.

A senior Israeli Foreign Ministry official said in reaction that the ministry was positively surprised by the number of abstentions at the United Nations, especially by Eastern European countries, Canada and Australia. He blamed the UN for being an Israel-obsessed hostile organization, with 86% of its condemnations targeting Israel. The official believes that Trump’s Jerusalem proclamation strengthened the position of the Israeli government. Still, he does not expect the US Embassy to be relocated to Jerusalem anytime soon.

The US president’s decision created a deep schism among Western countries. Trump is not expected to meet European demands for a more multilateral Middle East policy. The UN decision that isolated Israel and the United States and the outrage expressed in Arab public opinion benefit the radical pro-Iranian organizations such as Hamas and Hezbollah.