The one-sided decision by the United States to relocate its embassy to Jerusalem in May opens the way for a European Mideast peace initiative. 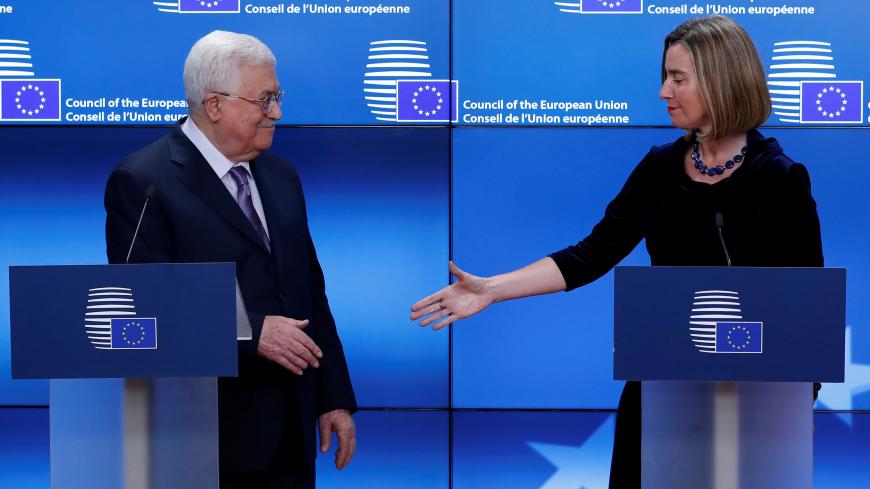 Palestinian President Mahmoud Abbas underwent some medical checks in Baltimore on Feb. 22, and therefore he had to cancel his visit to Venezuela. But while the test results were satisfactory, Abbas’ political health is in much poorer shape, to say the least.

According to a senior PLO official who is close to Abbas, the president was shocked by the US decision to move its embassy — or at least parts of it, including the ambassador’s office — from Tel Aviv to Jerusalem in May. Still, Abbas’ public reaction could be considered mild, compared with the rage expressed in Ramallah. The Palestinian leadership already understood that US President Donald Trump’s policies were 100% on Israel’s side, but to implement such a policy on Israel’s 70th anniversary (which in the narrative of the Palestinians marks 70 years since their national catastrophe — the Nakba) is viewed as a public attack against Abbas. More so, the Palestinian leadership considers this move as deliberately weakening Abbas’ position in public opinion.

The official argued that this American move is a gift to Israeli Prime Minister Benjamin Netanyahu, HaBayit HaYehudi leader Naftali Bennett, Hamas and Hezbollah. Abbas has stood by diplomacy since 1988. Now there is not a single Palestinian left who believes that diplomacy will lead anywhere.

Intense deliberations at the highest Palestinian level took place in the aftermath of the US decision, leading to several policy decisions.

The first was to convene an emergency meeting of the Arab League to denounce the US move, reiterate that East Jerusalem is the Palestinian capital and call on world countries to establish their embassies to Palestine in East Jerusalem. Ramallah also decided to ask Jordan, Saudi Arabia and Egypt to intervene vigorously with the US administration. In parallel, the Palestinian Authority (PA) will approach the European Union and Russia to engage in a new peace initiative based on Abbas’ Feb. 20 address to the UN Security Council.

Abbas is suggesting an international conference on a two-state solution, under the auspices of the P5+1 (China, France, Russia, the United Kingdom and the United States plus Germany). His closest advisers Nabil Shaath and Saeb Erekat have been in touch on this policy initiative with EU headquarters in Brussels and with the Emmanuel Macron administration in Paris. Abbas himself raised it in his last meeting with Russian President Vladimir Putin on Feb. 12.

A senior EU official close to High Commissioner for Foreign Affairs and Security Policy Federica Mogherini told Al-Monitor that Brussels was very much taken aback by Trump’s decision to move the US Embassy to Jerusalem in May. The European source qualified this decision as a kiss of death for any realistic US peace initiative.

According to this European diplomat, the EU will wait for another few weeks to ensure that there is no real US initiative, and then it will launch deliberation about an EU-led peace process initiative, led by France.

Such an initiative would entail a long list of elements. On the Iranian file, it will be comprised of a common policy on keeping the Iran nuclear deal intact while reaching out to Tehran to guarantee the implementation of the agreement. The EU will launch a dialogue with Iranian Foreign Minister Mohammad Javad Zarif on curbing Tehran’s regional ambitions, especially concerning the Tehran-Damascus-Beirut axis against Israel. Preventing the export of sophisticated missiles to Hezbollah will also be on the table.

On the Israel-Palestinian issue, the initiative would guarantee Israel that its security interest will be enhanced, not under threat, by a peace process. An element in that direction would be anti-terror cooperation with Egypt, Jordan and Saudi Arabia. The initiative will call for an international peace conference on a two-state solution along the lines of the two Paris peace conferences, to take place possibly in Brussels. The terms of reference would be the conclusion of the last Paris Conference on Jan. 15, 2017, and the 2002 Arab Peace initiative. The United States, EU, Russia and China would be invited to co-chair the conference. Israel will be requested to cease settlement construction during the eventual peace process (the official added that Brussels could not predict which Israeli government will govern in Jerusalem at the end of 2018).

In parallel, the PA will be asked to halt all incitement for violence and enhance security cooperation with Israel.

The European diplomat said that a major point in these eventual negotiations would be the boundaries between West and East Jerusalem. He also said that all permanent status issues would be simultaneously on the table.

Last, the initiative would offer Israel normalization of ties with the Arab states based on the Arab peace initiative.

A senior Israeli Ministry of Foreign Affairs official reacted to these propositions in a condescending way. He stated that “only Trump” is Netanyahu’s motto. Yet given the one-sided US policy and the political crisis in Israel, an EU policy initiative should not be ruled out in 2018-19. Otherwise a policy vacuum could leave the door open to violence.