Palestinian leadership was shocked by US President Donald Trump's decision to recognize Jerusalem as Israel's capital. 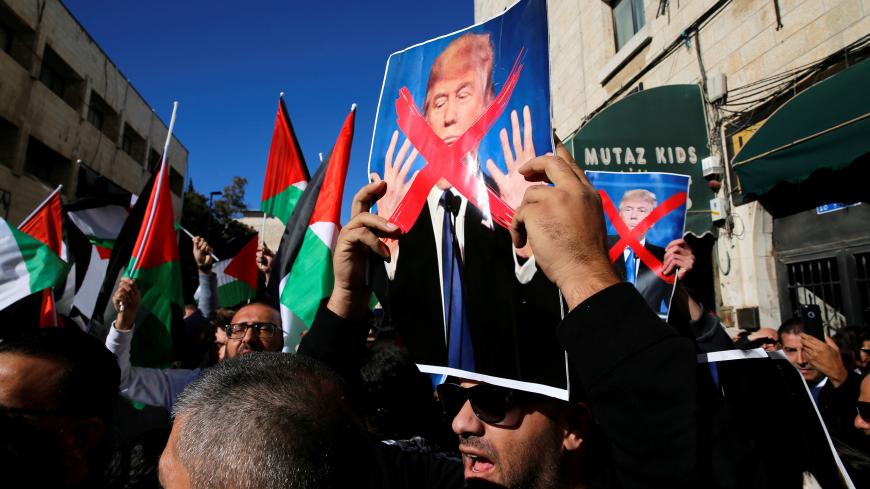 US President Donald Trump's Jerusalem proclamation of Dec. 6 sent shock waves throughout the Middle East. Visiting Ramallah one comes away with the impression that the Palestinians are experiencing some sort of a political earthquake. Meetings that took place in recent weeks with US envoy Jason Greenblatt focused on a possible American peace Initiative. And so, the Palestinian leadership was taken by surprise when Trump made his decision on Jerusalem.

A senior PLO official close to Palestinian President Mahmoud Abbas reacted to Al-Monitor with anger. “This is not a peace initiative, but a declaration of war against the Palestinian people,” he said, talking on condition of anonymity. The PLO official said that intense deliberations took place in the president’s office in the immediate aftermath of the US recognizing Jerusalem as the capital of Israel.

The analysis of the Palestinian leadership was that Trump is simply a supporter of the Israeli right wing and that he was influenced by two of his closest Jewish advisers — his son-in-law Jared Kushner and US Ambassador to Israel David Friedman, who is known for his close ties with the settler movement. The Palestinian leadership had warned Greenblatt that any policy move on Jerusalem would be perceived as a casus belli, ending Palestinian willingness to accept US mediation. Obviously, their warning was not taken seriously. And so, the sense of disappointment is double. The declaration reflects the fact that insufficient pressure was put on the White House by their Arab allies, as well as by their friends in the European Union.

Generally, the American move is seen in Ramallah as politically motivated. Apart from Trump's affinity with the Israeli right, he is mostly interested in appeasing his evangelical base at a time when he needs public support over the Russia investigation.

According to the PLO official, there were some concrete conclusions from the deliberations. First, the Palestinians decided to halt all contacts with the US envoys on a US-led peace process, and they will announce publicly that the United States has ceased to be an honest broker. Ramallah canceled Abbas’ meeting with Vice President Mike Pence in Bethlehem scheduled for Dec. 19.

Abbas met with Jordanian King Abdullah on Dec. 7 to coordinate the political and public protest, the theme of which is the “protection of Palestinian and Muslim Jerusalem.” The Palestinians also decided to coordinate a sharp anti-US reaction together with Egypt and Saudi Arabia. A special role is attributed to Saudi Crown Prince Mohammed bin Salman, who is known to have a close relationship with the White House.

Other steps that Ramallah is planning to take are convening a meeting of the Arab League and encouraging high-level participation in the Organization of Islamic Cooperation’s campaign to recognize East Jerusalem as the capital of Palestine.

The Palestinian intention is to emphasize the controversy both on the political and on the religious angles. Palestinian statehood with East Jerusalem as its capital is now under attack. Any future diplomatic process must therefore be solely based on the Arab Peace Initiative of 2002. Ramallah estimated that Cairo's official response, simply emphasizing that East Jerusalem was the capital of Palestine, was too mellow.

According to the senior PLO official, some senior Fatah officials called to instigate a third intifada. Others pushed for greater unity with Hamas, without taking a common position on a violent reaction. Abbas emphasized that the protest must remain nonviolent and instructed his security forces accordingly. An international public campaign on the Palestinian right to a capital in East Jerusalem and their political and religious rights to Haram al-Sharif is being launched.

A senior Israeli Ministry of Foreign Affairs official who spoke to Al-Monitor on condition of anonymity said that the president’s declaration was a major policy victory for Prime Minister Benjamin Netanyahu, describing the decision as a historical turning point. The Israeli source is aware of the looming dangers of an outbreak of violence in the West Bank, East Jerusalem and the Gaza Strip, and he said that Israel would react firmly and with proportion.

The Israeli official is right. Trump’s decision to change American policy on Jerusalem is a historical watershed. It is hard to see how the Palestinian side in the years to come (as long as Trump is president) will engage in a realistic peace process under American auspices. Jerusalem and Al-Aqsa Mosque are becoming the focal point of the Palestinian struggle for independence, and the outbreak of violence may be a matter of time. The US decision plays into the hands of Hamas, while weakening Abbas. At the same time, the US decision also strengthens the political status of Netanyahu, the Likud and the settler movement. As to Jerusalem, it remains the same divided city that it was before Trump's proclamation.