Has there been a breakthrough in Hamas-Egypt ties?

A Hamas visit to Egypt ended on a positive note, which might push the Egyptians to stop the incitement campaign against the movement. 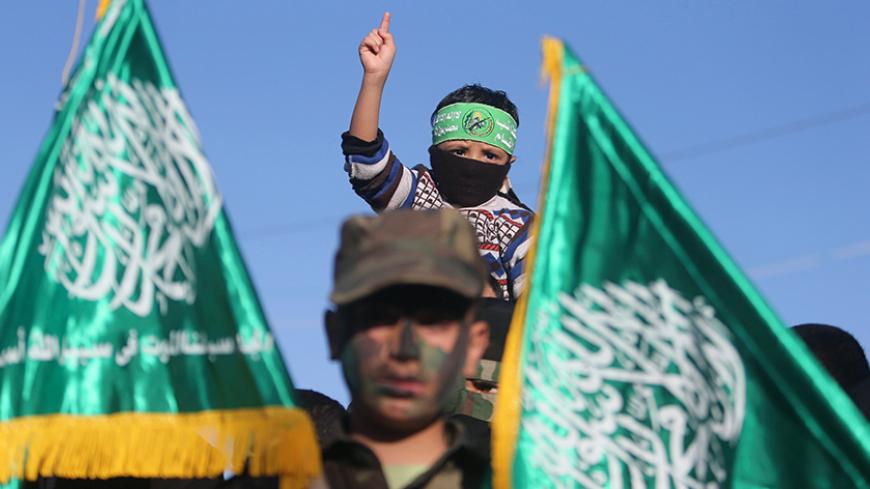 A Palestinian boy wearing the headband of Hamas' armed wing takes part in a protest in Rafah near the border between the southern Gaza Strip and Egypt, Feb. 5, 2015. In a statement read by a masked gunman, 10 armed Palestinian factions jointly condemned an Egyptian decision to list the Hamas military wing as a terrorist organization. - REUTERS/Ibraheem Abu Mustafa

Six months after the last visit to Egypt by Hamas representatives in September 2015, a high-ranking Hamas delegation paid a five-day visit to Cairo on March 12. No details were publicly disclosed about the security-related talks held at the General Intelligence Directorate, which manages the Palestinian file, but a senior Hamas official following up on the talks with the Egyptian side spoke to Al-Monitor on condition of anonymity.

The official commented, “The meetings addressed a number of important security topics, such as the abduction of four Hamas figures in the Sinai Peninsula on Aug. 20, 2015, Hamas’ demand to permanently open the Rafah crossing and Egypt’s accusation of Hamas being involved in the assassination of former Egyptian Attorney General Hisham Barakat in June 2015. In addition [talks covered] the continuation of work in some tunnels between the Gaza Strip and Sinai. Although we have emphasized our noninterference in internal Egyptian affairs, we continue to control our security borders with Sinai.”

Perhaps Hamas preferred not to reveal details about the security meetings with the Egyptian's until after another round of talks following completion of the current regional tour of Hamas officials. Since March 18, Hamas leaders based in Gaza and abroad have been meeting in Qatar. After the Qatar gathering, a Hamas delegation is expected to meet again with Egyptian officials to inform them of the movement’s final positions on the issues discussed in Cairo. Hamas might then issue an official statement outlining the discussions with the Egyptians. Such a statement, should one be issued, could reveal the points of contention and agreement between the two parties.

Hussam Badran, a Hamas spokesman residing in Qatar, told Al-Monitor, “Hamas’ visit to Egypt is a step in the right direction, toward a natural and positive relationship to overcome the tensions that prevailed earlier. Despite the absence of a written agreement, we have stressed to our Egyptian brothers that we have nothing to do with the security incidents in Egypt and Sinai. Hamas is doing its part on the Gaza border, as it always has, and it is concerned about the security of Egypt and its people. This is what we have explained to the Egyptians.”

In tandem with the Hamas visit to Cairo, positive signs emerged as Egyptians appeared to lighten up on the long-running media campaign against Hamas. On March 17, the well-known journalist Wael Ibrashi, who is close to decision-making circles in Egypt, had called on the media to stop attacking Hamas. On March 12, the government-affiliated newspaper Al-Ahram had published an article by Muhammad Amin in which he described Hamas as a Palestinian resistance movement that has and will always impress Egyptians.

Abdullah al-Ashaal, former Egyptian deputy foreign minister, said on March 19, however, that major disagreements still remain between Cairo and Hamas. Egypt wants guarantees from the movement that it will not use Gaza as a way station for fighters of the Islamic State-affiliated Wilayat Sinai. It also wants Hamas to stop providing logistical support to armed groups. This means that patching things up between the two parties would take a long time, although it is extremely important for channels of communication to remain open, according to Ashaal.

Meanwhile, Hamas expressed optimism following the Cairo meetings. The Hamas-affiliated newspaper Felesteen published an article March 21 describing the visit to Egypt as having been positive. Earlier, on March 14, Yousef Rizqa, former minister of information in the Hamas government, had spoken of the respect shown to the movement's delegation upon its arrival in Egypt and its stay in an undisclosed location for security reasons. The delegation was provided security guards during the stay.

Ibrahim Abrash, former Palestinian minister of culture and political science professor at Al-Azhar University in Gaza, told Al-Monitor, “After Hamas’ talks with the Egyptians, the movement might need to review its policies, positions and relations, given the decline of the Muslim Brotherhood's influence and of the political Islam that the movement adopted. This is in light of Hamas’ inability to make any breakthroughs in the internal Palestinian situation due to the deteriorating living conditions in Gaza. Yet, I hope Hamas’ review will not only be for tactical considerations to strengthen its control over Gaza.”

On March 20, Al-Monitor met with some members of the Izz al-Din al-Qassam Brigades, Hamas’ military wing, as they hung a large sign at the Saraya crossroads, the busiest area in Gaza City, that read, “The resistance does not point its weapons toward foreign parties.” The brigades had previously put up signs in the same spot featuring Muslim Brotherhood slogans and pictures of Morsi. This points to Hamas sending a friendly message to Cairo, indicating that it is distancing itself from the Brotherhood, its mother group.

In this regard, Badran said, “Hamas’ positions regarding the Brotherhood are very explicit. We are proud to belong to this group’s ideological school, but we are a Palestinian liberation movement, and our decisions only stem from our Shura institutions and the [Hamas] leadership. This is a fact well-known to all parties, Egypt included.”

In an interview with Al-Monitor, Ghazi Hamad, deputy foreign minister in Gaza and a Hamas leader in constant contact with Egypt, refused to acknowledge any link between taking down Brotherhood pictures and the visit to Cairo. “I find it strange to say that the fact that Hamas is [merely] taking down some pictures and putting up others follows instead in the context of the movement’s understandings with Egypt,” said Hamad. “I can assure you that the agreements reached between the two parties during the recent visit will result in establishing prosperous relations between the two in the future.”

Hamas appeared to be sending a number of other signals to Cairo following the recent meeting. For the first time, on March 16, Hamas' political bureau, namely, Mousa Abu Marzouk and Khalil al-Hayya, condemned the political assassinations, including Barakat's, that have taken place in Egypt since President Mohammed Morsi's overthrow in July 2013. The Palestinian news site Al-Quds then reported on March 20 that Hamas had ordered its leaders and other members not to use Brotherhood slogans at festivals or to print the group’s slogan — “The Quran and the two swords” — on ads for movement activities, a step welcomed in Egyptian circles.

On March 22, Ismail Haniyeh, deputy chief of Hamas’ political bureau, denied that Hamas is playing any security or military role in Egypt, while stressing that the movement is keen on establishing good and balanced ties with Egypt. It may be too early to see positive effects on the ground, such as the opening of the Rafah crossing, indicating that Hamas and Egypt are heading toward a honeymoon phase after an irrevocable rupture appeared to be on the horizon. After all, in addition to accusing the movement of being involved in Barakat's death, Egyptian officials had also accused it in February of planning to establish a state in Sinai.

Easing the tensions that had prevailed between the two parties can, however, be seen as a big first step toward relieving the logjam that could have resulted in negative consequences for both sides.