Hamas is pushing to improve its relations with Egypt after the Gaza war, accepting the new status quo with President Abdel Fattah al-Sisi in Cairo. 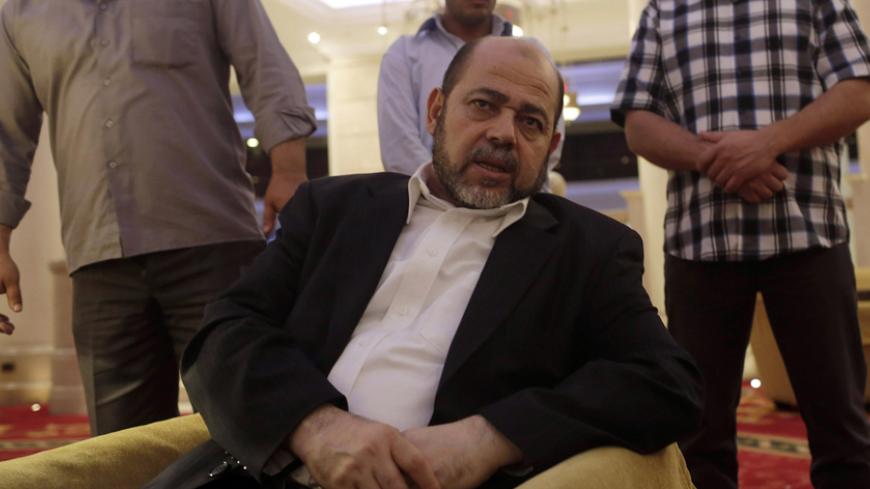 Following the Israeli war on the Gaza Strip, the relationship between Hamas and Egypt has gradually improved, especially after Hamas leader Ismail Haniyeh praised Cairo’s role in sponsoring the cease-fire agreement in a phone call to Egyptian intelligence in early September.

Al-Monitor was shown an internal Hamas document about this development. It calls for "reconsidering the relationship with Egypt to improve and develop it, deal with the existing regime and overcome the past. In addition, [Hamas should] take advantage of the communication that took place between both sides during the Gaza war, as it broke the ban placed by Egypt on dealing with Hamas, which is a positive thing."

Mahmoud al-Zahar, a member of Hamas’ political bureau in Gaza who has played a key role in improving ties with Egypt, announced a breakthrough in bilateral relations Oct. 1. He said that Hamas began to respect the role of Egypt, regardless of its ruler.

In a phone call with Al-Monitor, an Egyptian security official who preferred to remain anonymous said, "The Hamas delegation that visited Cairo in late September to finalize the negotiations over the truce with Israel held a 2½-hour meeting with Egyptian officials to discuss issues still pending between Hamas and Egypt. The meeting resulted in a breakthrough in the relationship between the two parties, which agreed to hold another session to discuss the remaining issues."

On Sept. 27, the deputy chairman of Hamas’ political bureau, Mousa Abu Marzouk, said that Egypt has not abandoned its role toward Palestine, and that Hamas seeks good relations with all countries to help it cope with Israel. He expressed “hope for good relations with Egypt in the future, because we need this relationship more than Egypt does.”

In an interview with Al-Monitor, Hamas spokesman Mushir al-Masri said, "Hamas is moving toward a new relationship with Egypt and turning the page on the past. It is keen to maintain strategic relations with it and does not want to set barriers and obstacles." He added, "We are heading toward openness by renewing communication with Egypt, to serve common interests and support the Palestinian people."

The Egyptian security official told Al-Monitor, "After the recent war in Gaza, Cairo has observed genuine efforts on the part of Hamas to open a new page. This was reflected through the tight control of the border with Gaza, which has helped to provide security in the Sinai Peninsula. This was achieved through undeclared coordination between Egyptian security forces and Hamas. Egypt and Hamas are both convinced that they do not need more security problems inside their borders. They are aware of the need for Cairo and Gaza to solve all files, despite the endless natural differences between them.”

It came as a surprise that Egypt permitted many Hamas leaders to travel to Saudi Arabia this year for the pilgrimage season, including the vice president of the Legislative Council, Ahmed Bahar; head of the security committee of the Legislative Council, member of parliament Ismail al-Ashkar; deputy chairman of the comtmittee on education, Rahman al-Jamal; and two members of Hamas’ political bureau, Nizar Awadallah and Rouhi Mushtaha.

A security official in Gaza, who preferred to remain anonymous, told Al-Monitor, “This is seen as a positive sign on the part of Egypt toward Hamas, after Cairo has been refusing the travel of prominent leaders in the movement. This suggests that relations are improving after the tension that arose following the ousting of [Mohammed] Morsi in July 2013.”

Hamas-affiliated media outlets, especially Al-Aqsa TV and radio station, have begun using the term “reconciliation” in relation to the Egyptian state, especially with Egyptian President Abdel Fatah al-Sisi — a far cry from the previous characterization of Sisi as the “leader of the coup.” This means that Hamas has accepted the new status quo in Egypt.

Preachers in Gaza who serve as the religious symbols of Hamas have also stopped talking about the internal situation in Egypt, as this issue raises the ire of Cairo. Preachers adjusted their behavior following directives issued by Hamas religious authorities, who demanded preachers avoid controversial topics regarding Egypt.

Alaa al-Batta, head of the Governmental Committee for Breaking the Siege in Gaza, told Al-Monitor, “Many delegations supporting Gaza and willing to visit it faced a lot of obstacles on the semi-closed Rafah crossing. Dozens of delegations were held up in Egypt before entering Gaza and then sent back to their countries.”

Improved relations between Hamas and Egypt depend on several issues, primarily the ongoing reconciliation with Fatah and the truce with Israel.

During the Gaza donor conference in Cairo, Sisi said in his Oct. 12 speech that the reconstruction of Gaza ought to coincide with a permanent truce with Israel and with handing over the reins of power in Gaza to the Palestinian Authority.

Khalil al-Hayya, a prominent Hamas political leader, said that Hamas eliminated all pretexts to postpone the reconstruction of Gaza, as it had welcomed the visit of the unity government to the Gaza Strip.

Al-Monitor conducted a phone interview with a Hamas official who spoke on condition of anonymity. The official, who has visited Egypt many times, expressed his “optimism about positive developments in the relations with Egypt, despite many outstanding issues.” However, he said, “Regulatory compliance with the leadership of Hamas at home and overseas will lead to building strategic relations with Cairo.”

When asked about the role of regional developments in accelerating the improvement of relations between Hamas and Egypt, he said, “The region is preoccupied with fast-paced changing developments, which are an opportunity for Hamas and Egypt to improve their relations and dwell on their shared positive points.”