Egypt invited Hamas to Cairo after months of rupture between the parties, indicating Egypt’s efforts to maintain its role in the Palestinian cause. 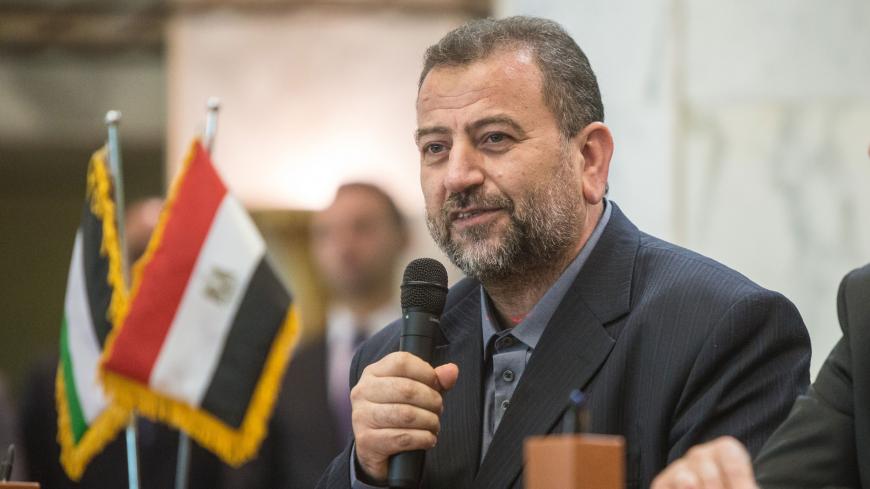 Saleh al-Arouri is seen behind Palestinian and Egyptian flags at the Egyptian intelligence complex in Cairo, Egypt, Oct. 12, 2017. - Ibrahim Ezzat/NurPhoto via Getty Images

Saleh al-Arouri, deputy chief of Hamas' political bureau, announced during an interview on Al-Aqsa satellite channel Feb. 22 that Egypt sent an invitation to Hamas to visit it to discuss several important issues. Arouri said that Egypt is Hamas’ second home and underlined the stability of relations between them.

This is the first time Egypt invites Hamas to visit since November 2019, when a Hamas delegation headed to Cairo to hold talks about the Palestinian reconciliation, the general elections and ways to alleviate the situation in the Gaza Strip. Relations between the two parties had been frosty following Ismail Haniyeh’s visit to Iran in January to offer his condolences following the killing of Islamic Revolutionary Guard Corps' Quds Force commander Qasem Soleimani. The visit angered Egypt, because Haniyeh allegedly vowed not to visit Iran when Cairo allowed him to conduct his foreign tour.

Iyad al-Qarra, former editor-in-chief of the Gaza-based Felesteen newspaper, told Al-Monitor, “Egypt’s invitation to Hamas indicates that they have overcome the coldness in their relations. Despite their differences over Palestinian and regional developments, Hamas will secure the borders of Gaza and the Sinai Peninsula, and Egypt will keep sponsoring relations with Israel. Egypt monitored Hamas’ behavior and disengagement in the recent Gaza escalation Feb. 23-24 between Israel and Islamic Jihad. This conduct showed how reasonable Hamas is and careful in handling the Gaza affairs alone, despite its urgent need for some parties like Qatar that would offer financial aid to the Gaza Strip while Egypt handles the security portfolio.”

On Feb. 10, an Egyptian security delegation headed by Ahmed Abdel Khalek, the Egyptian intelligence officer in charge of Cairo's Palestinian portfolio, arrived in Gaza for talks with Hamas about the truce with Israel and to discuss bilateral relations and the security situation on the Egyptian-Palestinian borders. This was the first Egyptian visit to Gaza in 2020, after ties were cut off for months. However, it was notable that Hamas leader in the Gaza Strip Yahya Sinwar did not meet with the Egyptian delegation.

But on Feb. 21, Sinwar met with Qatari Ambassador to Palestine Mohammed al-Emadi who offered a grant to the Gaza Strip worth $12 million. The Israeli Walla website reported Feb. 22 that Mossad Director Yossi Cohen and Chief of the Israeli Southern Command in the Israeli army Herzi Halevi visited Qatar in secret in early February and discussed a settlement with Hamas without mentioning Egypt, which raised concerns among Egyptians that it would be deprived of the Gaza file and other rivals, like Qatar, would interfere.

Basem Naim, former minister of health in Gaza’s government and member of the Hamas international relations office, told Al-Monitor, “Hamas’ upcoming visit to Egypt aims to maintain contact between the two parties and preserve their long-standing coordination and cooperation, despite their different views on regional and local developments. The visit will focus on ways to confront [US President Donald Trump’s] 'deal of the century,' the Israeli aggression on Gaza and its humanitarian crisis, as well as [economic] incentives and facilitation of movement through the Rafah crossing.”

Naim added, “If Egyptians propose the reconciliation issue, Hamas will welcome all Egyptian efforts to achieve it and turn the rift page, despite the absence of positive indications from Fatah that it is willing to end this dark era.”

Wissam Afifa, director of Al-Aqsa satellite channel in Gaza, told Al-Monitor, “Relations between Hamas and Egypt were cold at some point, and this was reflected in a media attack from Egyptian journalists and reduced visits between Gaza and Egypt. The visit of the Egyptian delegation in early February broke the ice, after the deterioration of the situation between Hamas and Israel, and with Cairo’s desire to prevent a military confrontation ahead of the Israeli elections March 2.”

He added, “The [upcoming] visit will unlikely result in major outcomes, except for renewal of bilateral relations. The parties will also discuss ways to solve the issue of increasing Egyptian taxes on imported products to Gaza, which raised the ire of Gaza traders.”

Egypt’s invitation of Hamas after months of absence coincided with the Israeli delegation’s visit to Qatar, which might indicate that Egypt was annoyed. Egypt might have realized that other parties would rush to fill the void left by its absence in the Gaza Strip. Its invitation for Hamas to visit expresses its conviction that it should cement its presence in Gaza, reconsider its decisions with Hamas and end the boycott, even if forcibly.

Osama Amer, a Cairo-based Palestinian writer, told Al-Monitor, “Egypt’s invitation for the Hamas leadership to visit might negate all media talk about their tense relations following Haniyeh’s visit to Iran. Egypt does not impose its conditions on Hamas in managing its foreign relations. Egypt is strongly present on the security and political arenas regarding the Palestinian cause in Gaza. The geographical location dictates their relations.”