Al-Azhar is reported to be researching the possibility of adding a fine arts faculty to its string of institutions. 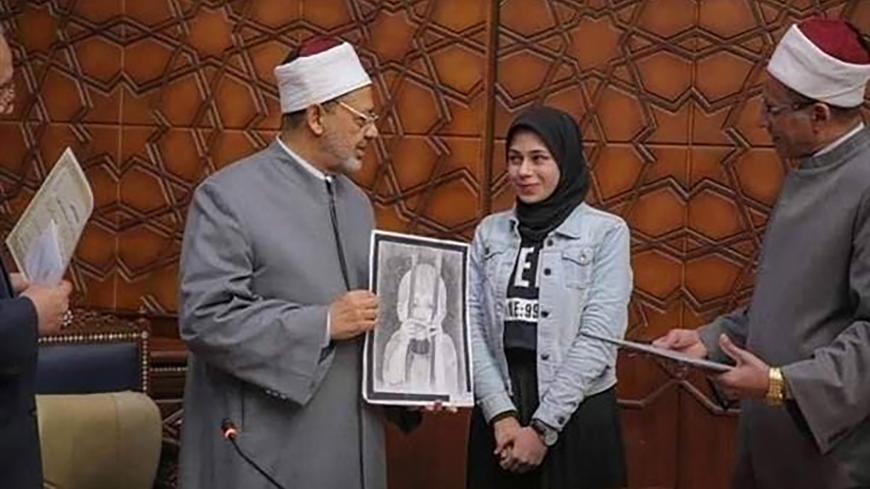 The grand imam of Al-Azhar, Ahmad al-Tayeb, speaks to Rawan Ahmed, an Azhari student, while holding one of her drawings at Al-Azhar's pavilion at the Cairo International Book Fair, Jan. 28, 2019. - Rawan Ahmed

For Rawan Ahmed, a third-year secondary student at an Azhari school in Damietta, Jan. 28 was a special occasion. On that day, Sheikh Ahmad al-Tayeb, the grand imam of Al-Azhar, honored her not for her success at school, but because of drawings she had made.

“I was thrilled when Al-Azhar’s grand imam expressed admiration for my drawings and portraits,” Ahmed told Al-Monitor. “He advised me to develop my skill.”

Ahmed was among 12 students from Al-Azhar-affiliated schools and universities selected to present their artistic works in the Al-Azhar pavilion at the 50th Cairo International Book Fair, held Jan. 23 to Feb. 5. For the fair, Ahmed, who has loved drawing since she was a child, displayed drawings of a sad-looking boy behind prison bars and a young woman holding flowers.

“This is not my first time participating in the fair,” Ahmed said, “but this is the first time ever to see with my own eyes the grand imam’s praise and admiration for our works.” Tayeb presented participants with certificates of appreciation to encourage them to continue to develop their talents, and he also raised the possibility of Al-Azhar establishing a faculty for fine arts.

“We thought Al-Azhar does not encourage art, but we were wrong,” Ahmed said. “After we were honored by the grand imam, we found him to be a man who served as a compassionate father to us. He was pleasant and polite and very kind.”

Abdul-Dayem Nosseir, adviser on education to the imam, told local media on Jan. 28 that Tayeb's proposal for a fine arts faculty stemmed from his keen interest in encouraging the talents of Al-Azhar students. Nosseir told Al-Tahrir, “All the bodies affiliated with Al-Azhar are currently studying the proposal of the grand imam in order to prepare procedures for founding the faculty [i.e., the curriculum and departments] that meets the needs of those talents.”

Aziza al-Saifi, a professor of rhetoric at the Faculty of Islamic Studies at Al-Azhar University, was quoted in the media as praising the proposal, remarking that a fine arts faculty would be viewed as an accomplishment for Al-Azhar. It would prove that the institution does not stand in the way of the arts and that Islam actually encourages it and those who practice them.

Saifi told El-Balad on Jan. 31 that contrary to what some Salafists claim, Muslims are capable of recognizing drawing and sculpting as forms of art and fields of study, not means for producing objects of idolatry. “Sculpture is a fine art, and we have to change our ideas. The Muslim knows that Allah is [the one God] and cannot imagine that a person who sees a sculpture will worship it.

This year was the third time that Al-Azhar has taken part in the Cairo book fair, which in 2019 featured 1,273 publishers from 35 Arab and foreign countries. A positive attitude toward the arts was evident at Al-Azhar's pavilion, which attracted a large number of visitors due to the many activities there, such as cultural performances and workshops for painting, calligraphy and handicrafts.

Al-Azhar scholars conducted some 20 seminars addressing a variety of religious and societal topics, among them home and citizenship, East and West, the role of Azhar women in education, advocacy and community service, Arabic calligraphy, and Islamic and Arab identity.

Fayez Barakat, a member of parliament’s Education Committee, said in a Feb. 2 press statement that the proposal for an Al-Azhar-affiliated fine arts faculty reflects not only a desire to develop students' skills, but also an effort by Al-Azhar to express an openness to areas in which it has not focused in the past.

The Ecole des beaux-arts (School of Fine Arts), Egypt's earliest such school, was established by Prince Youssef Kamal in 1908. Among the students who attended it were Mahmoud Mokhtar and Ragheb Ayad, whose paintings and sculptures focused on Egyptian identity. Between 1950 and 1953, it was called the Royal College of Fine Arts and after that the Faculty of Fine Arts, affiliated with the Higher Education Ministry. In 1975, it was taken over by Helwan University.

Ahmed Othman, a pioneering sculptor, founded a fine arts faculty at Alexandria University in 1957. Another government-supported faculty of fine arts was established in 1996 at South Valley University, in Luxor.

Speaking to Al-Monitor, Gaber Asfour, a writer and former minister of culture, cited Al-Azhar's position as a center of Arabic literature and Islamic learning and how at President Abdel Fattah al-Sisi's urging it is now engaged, along with the Ministry of Endowments, in renewing religious discourse in an effort to fight extremism. “From my point of view, Al-Azhar should focus on this significant duty more than anything else,” Asfour said.

Asfour further noted that under President Gamal Abdel Nasser, a number of non-religious faculties had been established in the early 1960s within Al-Azhar, a first since it was established, in the Fatimid era. They included faculties of medicine, pharmacy, business, engineering and science, which were aimed at preparing students to better integrate into society. As regards a fine arts faculty, however, Asfour has concerns.

“I have many questions,” Asfour said. “[Will it] teach all the fine arts? Will the faculty accept unveiled students and will it use models? Will it fight the extremist ideas that prohibit painting and sculpture?”

“We can’t judge in advance, however,” he said. “We will have to wait and see.”