Hamas leaders and spokespeople have been instructed not to make any public statements concerning the election of President Abdel Fattah al-Sisi in Egypt, to avoid aggravating the new president. 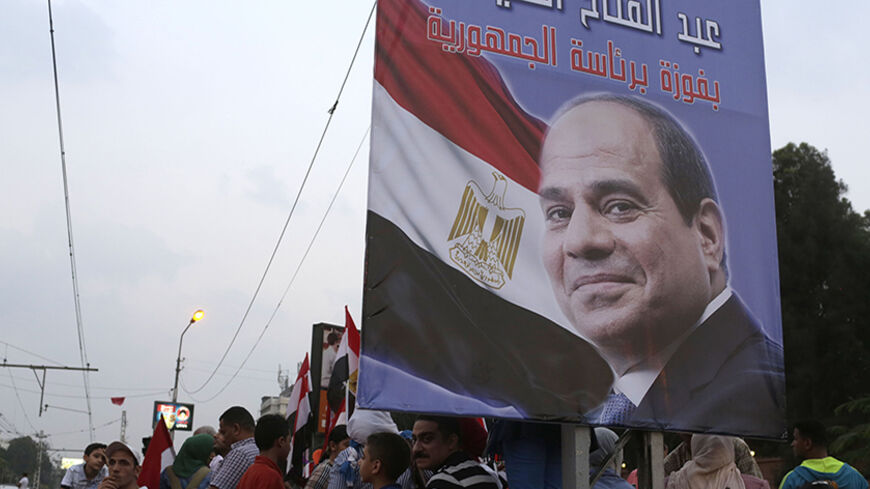 Egyptians celebrate after the swearing-in ceremony of President Abdel Fattah al-Sisi, in front of the presidential palace in Cairo, June 8, 2014.

GAZA CITY, Gaza Strip — Hamas has so far kept silent on the election of Egyptian President Abdel Fattah al-Sisi, who overthrew the movement's ally, former President Mohammed Morsi, last July. Hamas has refrained from issuing any press statements related to the elections, for fear this might have negative repercussions on its relations with Egypt, which have been strained since last year.

A well-informed source in Hamas said the movement’s political bureau issued strict instructions to all leaders and media spokespeople within the movement not to address the election of Sisi in any interview or public meeting.

The source, who spoke on the condition of anonymity, told Al-Monitor, “All senior officials and media spokespeople within Hamas have received a text message telling them not to give any public statements, whether to local or foreign media outlets, about the presidential elections in Egypt.

“Sisi winning the elections was a foregone conclusion and this is what happened. He was officially inaugurated as president. The decision not to talk about the elections, as it is seen as the least damaging option, came from within the institutions of Hamas."

Al-Monitor tried to obtain an official comment on the election of Sisi from most of Hamas’ leaders and spokespeople in the Gaza Strip, but all of them declined and some did not answer repeated calls.

Another source in Hamas said there are some differences between leaders within Hamas about the movement’s stance toward the new regime in Egypt, which is at loggerheads with Hamas, as the latter considered it to be part of the Muslim Brotherhood that continues to reject the ousting of Morsi.

The source told Al-Monitor, “Debates are still ongoing within the movement’s different institutions abroad and at home, regarding the way of dealing with the new Egyptian regime. There have been some disagreements and differences in views. Eventually, Hamas decided to wait and refrain from announcing any new position.”

The prevailing crisis between Hamas and Egypt was alleviated after the movement’s leaders announced publicly that Hamas will not interfere in Egypt’s internal affairs, and that movement-affiliated media outlets will stop talking in the name of the Muslim Brotherhood regarding the events unfolding in Egypt.

Egypt is still refusing to open the Rafah crossing, the only means of travel for most Gazans due to Israel’s blockade. Egypt is opening the crossing for a few days, separated by large intervals of time, so that Umrah pilgrims can pass to the Hejaz region in Saudi Arabia. According to a post on Hamas official Ihab al-Ghussein’s Facebook page, the Egyptian authorities have opened the crossing for 14 days only since the beginning of 2014.

The source noted that the calmness between Hamas and Egypt came as a result of efforts exerted and communications between Arab and Palestinian parties and the new Egyptian regime, reaching a formula whereby Hamas does not show support in any way to the Muslim Brotherhood and commit itself not to intervene in internal Egyptian affairs.

It does not seem that relations between Hamas and Egypt will improve in the near future, as the Egyptian regime is preoccupied with sorting out its internal issues. Added to this, Hamas has not radically changed its stance toward Egypt and Morsi's ouster.

Moumin Bseiso, a political writer for the Hamas-affiliated Al-Resalah newspaper, does not expect the relationship between the two sides to witness a radical change in the upcoming phase, since the Egyptian regime perceives Hamas as ideologically and organizationally affiliated with the banned Muslim Brotherhood.

“Relations now are based on anticipation and caution. It will remain so in the upcoming days. However, there is a desire from both parties to keep communications and not cut them off,” Bseiso told Al-Monitor.

“I believe that the relationship will be based on the security dimension only, as was the case during the rule of former President Hosni Mubarak. Egypt does not want to distance itself from the Palestinian cause, and Hamas has become an important actor in the Palestinian equation, which cannot be easily disregarded,” he added.

He noted that the fact that the military apparatus of Hamas, the Izz ad-Din al-Qassam Brigades, are fighting Israel, compels all parties to deal with Hamas. Given that Egypt is the main sponsor of pacification agreements, keeping the communication channels open is very important, even if limited, so the disputes that arise from time to time, especially between Hamas and Israel, can be resolved.

Hamas hopes that the formation of the national unity government after the signing of the reconciliation agreement, and since it is no longer in control of Gaza, will constitute a breakthrough to improve the relationship and placate tension with the new Egyptian regime. But, according to the same source, until this moment the relationship did not witness any change.

Hamas, which has lost the majority of its allies in the Arab region, is seeking to improve its regional relations and get rid of the negative effects resulting from tension with other countries. After the political situation stabilizes in Egypt, Hamas will be compelled to officially recognize and deal with the new Egyptian regime, and get over the ousting of the Muslim Brotherhood.