A hate campaign against Palestinians in the Egyptian media has irked Palestinian journalists. 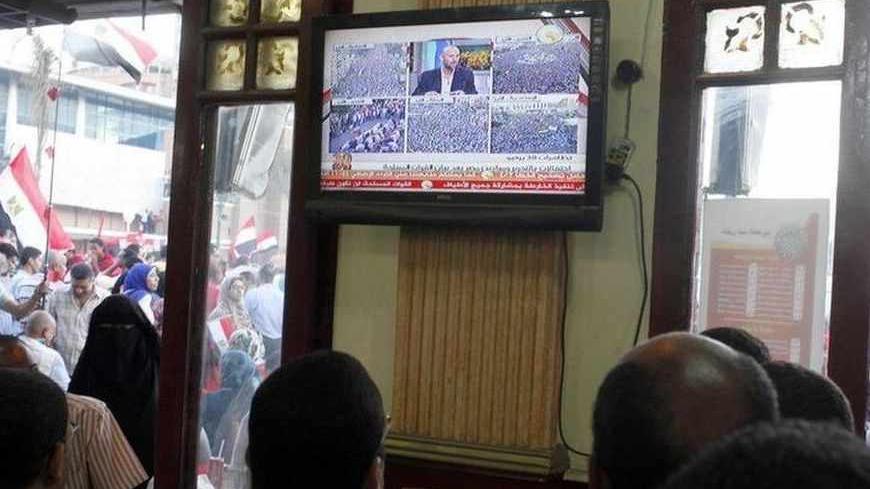 Anti-Morsi protesters follow the news on television in a public cafe on a main square in Alexandria, July 1, 2013. - REUTERS/Asmaa Waguih

“Deposed President Mohammed Morsi is originally Palestinian,” said one of the guests of a show aired on the Egyptian Al Kahera Wal Nas channel. In the video, which was disseminated on social media websites, the show’s host asked the guest to repeat the so called “important statement.” Activists commenting on the video noted that such statements are part of the wave of instigation that aims to punish the Syrians and Palestinians living in Egypt, especially those who support the Muslim Brotherhood.

The examples of how media speech is slipping towards incitement are proliferating day after day, which led nine Egyptian human rights organizations to issue a statement on July 7, 2013, condemning “the false information some Egyptian journalists are resorting to, to instigate hatred against the Palestinian people, namely Amro Adib, Lamis Hadidi and Ahmad Moussa on CBC and Tahrir channel, who disseminated on their shows false information that instigates hatred against Palestinians.”

The organizations that signed the statement affirmed that the leniency of the governments following the Jan. 25 revolution and the way they turned a blind eye to incendiary speech — which has been delivered on many occasions — without taking any strict and clear measures against the perpetrators, has led political powers and different media outlets to intensify the speech in a stark way.

The organizations — including the Hisham Mubarak Law Center, the Arabic Network for Human Rights Information and the Center for Egyptian Women’s Legal Assistance — reiterated the need to recognize the thin line between the legal right to freedom of speech, and hate-speech and incendiary rhetoric.

Wissam Afifa, editor-in-chief of Al Resalah newspaper, which is close to Hamas, believes that the Egyptian media does nothing but create counter campaigns. He explained that this instigation against Gaza was not only related to the June 30 protests. It has fiercely intensified in recent months, to transform Gaza from a card Morsi could use in his favor into a card used to put pressure on him.

Al-Monitor interviewed Afifa in his office at the newspaper’s headquarters, where an issue of the newspaper with the headline, “The Conspiracy of Embroiling Gaza,” lay on the desk. Afifa said every Palestinian journalist must refrain from adopting hate speech. They should instead focus on showing the real image of Gaza and the impact of the blockade. Afifa affirmed that he hired Egyptian writers as contributors — such as Rafiq Habib, a Copt — to highlight the strong relationship between Egypt and Palestine.

According to observers, these statements of hatred and instigation that are broadcast by Egyptian media outlets are not only leveled against Palestinians and Syrians, but against all those supporting Islamism, to the extent that satirist Bassem Youssef described the rhetoric of the Egyptian media following June 30 as “fascist,” noting that “victory has been transformed into racism and schadenfreude.”

For his part, Fathi Sabah, a Gaza-based reporter for Al-Hayat, said in an interview with Al-Monitor that the Egyptian media’s campaign against Gaza is fierce and unfair.

He said that we cannot blame a whole people for individual mistakes and crimes, and he noted that the media relies on leaks, not on verified information.

He added, “All the information leaked by the Egyptian media and related to the involvement of Palestinians has not been confirmed by the army, the intelligence services or the Ministry of Interior. If it was verified that Palestinians have participated in crimes, they should be handed to the courts and severely punished. However, random accusations should not be directed at the Palestinian people or Hamas.”

It seems that there is an opposing current — albeit small — to this provocation within Egypt. Some Egyptian and Palestinian media outlets issued a statement on Sunday, July 14, 2013, signed by a group of Egyptian intellectuals headed by the leader of the Egyptian Popular Current Hamdeen Sabahi, in which they condemn the provocations against the Palestinian cause and its people.

The statement noted that “the inclination of some media outlets in Egypt and the Arab world to promote negative images of Palestinians in Egypt, due to the divergence of Egyptian and Palestinian politics in the past year of the January Revolution, opened the way for the possible spread of rumors and the broadcast of provocative claims that only serve the stances of extremists in Egypt. These facts were not confirmed and only fed negative feelings.”

To find a solution for this issue, Sabah launched an initiative whereby a group of Palestinian journalists head to Egypt and meet with the Egyptian media syndicate and those journalists launching a war against Palestinians to clarify the real picture. Moreover, he called on Palestinian President Mahmoud Abbas to interfere via the temporary Egyptian president and the Egyptian army to stop this hate-speech, which is increasing the schism among the people.

In the Gaza Strip, the governmental media office plays the role of the Ministry of Information and has a plan to face these defamation campaigns. “The governmental media office is refuting and clarifying the facts, and exposing slander through communicating with some journalists and Egyptian figures to ask them to stand by the Palestinian people and apply pressure to halt the provocations,” said Ihab al-Ghussein, spokesman for the Hamas government.

In a phone interview with Al-Monitor, Ghussein added that “there are contacts with the security authorities to verify any story that comes out in Egyptian media, and these authorities deny what was said.” He called for uniting efforts to defy the media attack, and stressed the Palestinian people’s love for Egypt.

The syndicate for Palestinian journalists in Ramallah said in a statement published on its website on July 15, 2013, that there is a state of chaos prevailing among some Egyptian media outlets, targeting Palestinians and pitting Egyptians against their presence. This horrendous and dangerous phenomenon is not limited to Egypt, but also occurs in all places where Palestinians exist. The syndicate asked the political authorities responsible for the Egyptian media to put an end to these heinous provocations targeting the historic relationship between both peoples.

The incitement has gone too far and has reached a point where Morsi was said to be Palestinian. Consequently, this raised alarm among some media institutions. Mona Khoder, a journalist and the coordinator of the Palestinian Female Journalists’ Club, told Al-Monitor, “As journalists, we decided to hold an urgent meeting to discuss this media chaos and the disintegration of work ethic, and we have tried to communicate with our fellow Egyptian journalists to express our discontent regarding these provocations against Palestinians. Moreover, we call upon the International Federation of Journalists to stop this chaos.”