Hamas is preparing to launch a new television channel to promote its perspective despite its current financial crisis. 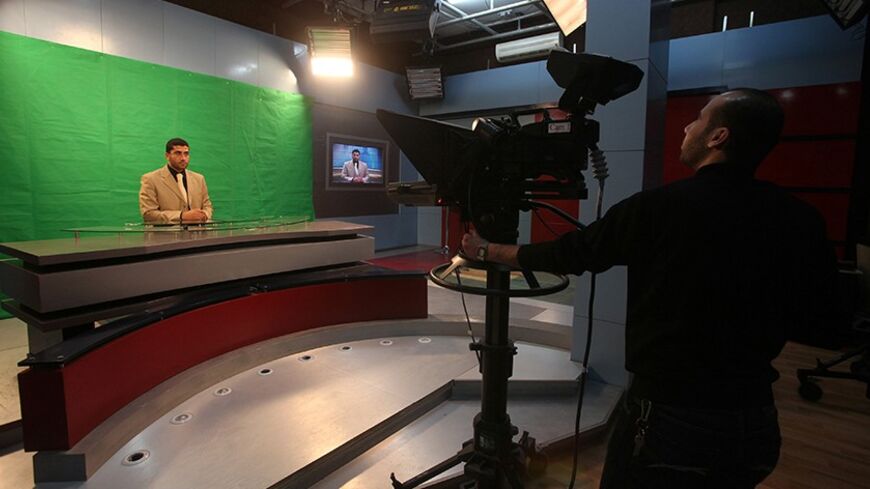 A Palestinian anchor works inside a studio of Al-Aqsa Television in Gaza City, March 19, 2010. - REUTERS/Suhaib Salem

GAZA CITY, Gaza Strip — The Hamas-led Gaza government is preparing to launch its own Al Ra’i satellite television channel, a new addition to an array of print and electronic media outlets by the same name.

The head of the government media office, Ihab al-Ghussein, announced Feb. 16 that a Council of Ministers resolution is being implemented to establish a television channel that will reflect government policies on various Palestinian issues.

“The satellite channel will convey a media message best serving the Palestinian cause and national agenda,” Ghussein said in an interview with Hamas-affiliated newspaper Felesteen.

The Gaza government and Hamas own a number of media outlets, mostly established after Hamas’ victory in the 2006 elections. They include a daily and semi-weekly newspapers, a number of local FM radio stations, a monthly newspaper that deals with social issues, a variety of local news agencies and websites, a media production company and the Al-Aqsa satellite television channel, as well as a few television channels and news sites abroad.

The Al Ra’i satellite channel is expected to begin pilot broadcasts this year. Its general manager, Ismail al-Thawabteh, tried to downplay the impact of Gaza’s financial crisis on the launch and refused to divulge the estimated costs of establishing the channel.

“We are endeavoring to exploit the human potential and financial resources available to finalize the ongoing preparations for the launch of the channel, while making every effort to minimize expenses. The current staff is comprised of approximately 30 employees, some of whom come from various government ministries and possess the required qualifications. We are also collaborating with local media production companies to produce programs at a lower cost, or sometimes free of charge,” he told Al-Monitor.

According to a number of Hamas officials interviewed by Al-Monitor, the movement felt that it lacked the proper venue on other Palestinian, Arab and foreign media outlets to express its views, because those outlets are biased toward either the Palestinian Authority (PA) or Israel and limit their coverage to exposing the movement’s negative aspects, without any mention of its positive ones.

A Hamas source who spoke to Al-Monitor on condition of anonymity indicated that the movement's media department manages all affiliated press outlets. He said that this department tries as much as possible to develop a distinctive media policy, particularly with regard to political positions and some Arab issues.

“We are incapable of controlling every single word spoken on media outlets, even if the latter is affiliated with the movement. But efforts to control and monitor media content are relentless to comprehensively and succinctly convey the movement’s point of view to all domestic and foreign parties,” he said.

Hamas gives great importance to the media, and has tried on more than one occasion to pressure media outlets into adopting its point of view or political line. Its dispute with Fatah also compelled Hamas to try to control the Palestinian Journalists Syndicate in Gaza, where Fatah controlled the majority of board members. Hamas formed its own Journalists Syndicate board of directors in Gaza, composed of journalists affiliated with the movement and Islamic Jihad. But the experiment quickly proved to be a failure when the board announced its resignation several months later.

Gaza government spokeswoman Israa al-Mudallal explained to Al-Monitor that the new channel would mainly target non-domestic audiences to acquaint them with the problems that the Palestinian community suffers from.

“The channel’s discourse will be different from the one adopted by other Hamas-affiliated media outlets. It will express the point of view of the government and will not be similar to that of the Hamas-affiliated Al-Aqsa satellite channel. We will try to focus attention on the human aspect and the suffering of people, as well as the positive qualities of Palestinian society in the Gaza Strip,” she said.

The same Hamas source added, “There was a clear mix-up, in Arab and foreign countries, between the stance of the Gaza government and that of Hamas as a movement, after the ouster of President Mohammed Morsi. As a result of satellite channels abroad being agreeable to the Muslim Brotherhood, and our lack of control over their editorial policies, it became necessary for us to have our own television channel that would target Arab and Western audiences and clarify the government’s stance independently.”

Journalist Fathi Sabbah, chairman of the board of the Palestinian Institute for Communication and Development, found the justifications given for the establishment of a government satellite channel to be lacking in light of the government's financial crisis and the presence of a sufficient number of media outlets addressing both the domestic and Arab audiences.

He told Al-Monitor, “Hamas and its government’s belief that the media can convince people, locally and abroad, of the movement’s vision and orientation may be erroneous. Adding another media outlet to the already existing ones will serve absolutely no purpose. All of Hamas’ branches and all of its government departments use email, text messages and other means of communication to send the media press releases and statements covering their positions on the various issues, without the need for any journalist to ask them any questions. What, then, is the use of establishing a new television channel?”

On a related note, the Gaza government still bars the distribution of West Bank newspapers in Gaza, in retaliation for the PA’s ban on the distribution of Hamas-affiliated newspapers in the West Bank. Hamas continues to forbid Fatah-affiliated media offices from conducting business in Gaza, but has allowed some of their reporters to file from Gaza, in return for the Ramallah government allowing Al-Aqsa TV and Al-Quds reporters to work there.

It seems clear that Hamas is giving Arab developments and their repercussions great importance, as its position in Gaza is greatly affected by the changes taking place in the region. Furthermore, it is trying, through the media outlets that it owns, to send messages to all parties of the need to improve its image, one sullied by what it considers the “incitement” against it in Palestinian and Arab media.