Battle of the generations kicks off in Hamas

Young Hamas members are raising their voices against the deteriorating political and economic situation in the Gaza Strip and rejecting ideas by some of their leaders that are inconsistent with their line of thought, as if the era of full compliance with commands is over. 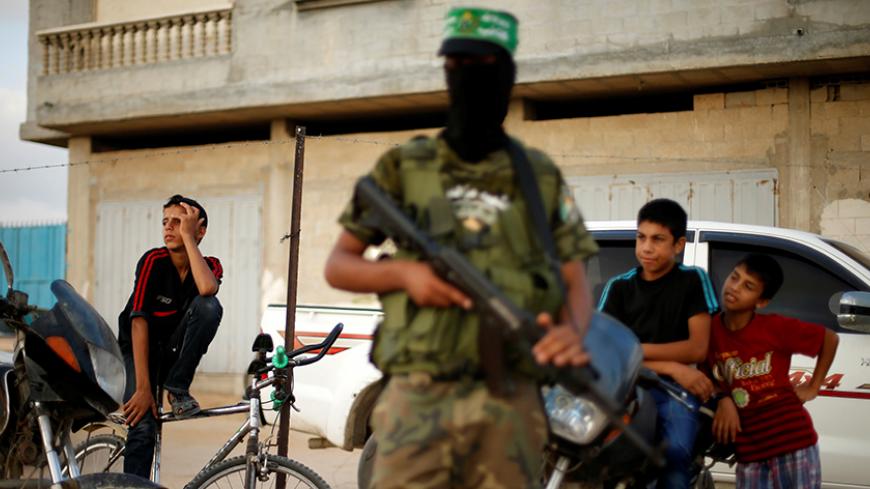 GAZA CITY, Gaza Strip — A Facebook comment Nov. 18 by Hamas leader Subhi al-Yaziji, who criticized the increasing emigration of young Gazans, provoked the wrath of a large segment of young Palestinians, especially those affiliated with Hamas, who believe emigration has become the last option to break free from the tragic situation in the Gaza Strip.

Yaziji’s comment was a reply to a Facebook post by journalist Wael Jarwan, a presenter of Hamas-affiliated radio station Sawt al-Aqsa. Jarwan wrote, “Every time the crossing opens, Gaza loses [part] of its finest youths.” Yaziji replied, “Maybe the contrary, Gaza could be getting rid of its hypocrites.”

Several hours later, Jarwan deleted the post following the controversy it was causing. “This has become a platform for the exchange of insults,” he posted on Facebook.

Yaziji, who holds a doctorate in Quranic studies from Egypt's Ain Shams University (2007), is a professor of Quranic studies at the Islamic University in Gaza and preacher at various mosques in Gaza City. He is a former general director of the public administration for preaching and guidance in the Ministry of Religious Affairs in Gaza. He was also a member of the first military group of Hamas formed before 1987.

Young emigrants from Gaza who are abroad also expressed their opinion on their own Facebook pages.

Khaled Kreizem, 26, who recently obtained his master’s degree and is currently residing in Turkey, told Al-Monitor, “Young Hamas members are breaking [Hamas’] obligation to obey leadership commands and revolting against odd statements and posts by [some] leaders in Hamas’ Dawa [socio-economic infrastructure] and recruitment department. But the activity on social media of young Hamas members — including any criticism of the Hamas leadership — is being controlled. An information officer at the Ministry of Interior in Gaza — who I will not name — contacted me via Facebook. When he learned that I am residing abroad he advised me to delete my post criticizing Yaziji — but I refused.”

Rami al-Jundi, 35, who worked at the Ministry of Youth and Sports in Gaza, which is affiliated with Hamas, and who is currently living in Turkey after graduating with a master’s degree in international relations, told Al-Monitor, “When some of the finest intellectuals and educated elite groups among Hamas with doctorates describe young Gazan emigrants as hypocrites, we see that intellectual hypocrisy prevails among these groups, which are supposed to be rational and guide Hamas’ youth to best serve their homeland. Young Gazans who left their country to pursue their education or to find a job only did so because they were frustrated with the political conflicts stirred by a failed leadership that destroyed the country and pushed its citizens to flee.”

It should be noted that when taking the oath of allegiance to join Hamas’ ranks, a Hamas member must pledge to comply with the leadership commands without any discussion or objection. In accordance with Article 2 of its Covenant, the sixth pillar of the oath of allegiance of the Muslim Brotherhood — of which Hamas is affiliated— is “obedience,” i.e., full compliance to commands at all times.

Hamas members are more than ever before raising their voices against the deteriorating political and economic situation in Gaza, as if they were no longer bound by Hamas’ oath of allegiance.

Abdullah Abu Youssef, 29, from Gaza, who is pursuing his doctorate in Sharia studies in Saudi Arabia, told Al-Monitor that Yaziji’s comment shows that some Hamas leaders are currently dealing with complex problems in a way that no longer rises to the level of the youths' ambitions, hopes and requirements.

He said, “Despair and frustration are growing among the youth, and the intellectual and economic gap between the popular base and the leadership is getting wider.”

Abu Youssef added, “I did not expect a Facebook comment to cause such a hype. This is a sign that young people are now raising their voices, criticizing and questioning Hamas’ leadership decisions and ideas and assuming more and more their public oversight role. This also shows inconsistency between old ideas and the ideas espoused by young people within the Hamas movement.”

Mohammed al-Kauifi, 29, who works for the Hamas-affiliated Al-Aqsa satellite channel, wrote on his Facebook page, “Travel is the journey of great men. Success may be found outside a country offering no success factors. Whoever denies Gaza’s difficult situation is either ignorant or a fool.”

According to official statistics of Gaza’s border crossings authority and the Ministry of Interior and National Security, 2,664 citizens left the Gaza Strip during the opening of the Rafah crossing with Egypt between Nov. 15 and Nov. 20, and most of them where young people looking for a job or wanting to pursue their studies abroad.

Jarwan told Al-Monitor, “No one has the right to prevent young people from leaving Gaza in search of opportunities for a better life. Youth emigration does not mean that Gaza is getting rid of its filth, since the homeland is for everyone. The replies to my post by young Hamas members reflect that young Palestinians have become more aware and convinced of the philosophy of political partnership with others — whether inside our country or abroad.”

Tamer al-Sharif, 37, a journalist with Palestinian Al-Quds satellite channel, agrees with Jarwan. He posted on his Facebook page, in response to Yaziji’s comment, “In all countries around the world, people emigrate and roam the earth in search of a livelihood or for education, [medical] treatment and tourism purposes. Those who leave Gaza, whenever the Rafah crossing opens, surely have their own reasons and justifications.”

Sharif told Al-Monitor, “Describing emigrants as hypocrites is wrong, especially since this was done by an esteemed and venerated sheikh and intellectual. Young people have become more aware and enlightened. The leaders of factions — mainly Hamas — can no longer impose their opinion on the youth by force.”

It seems that young Hamas members or supporters are starting to feel the gap in lifestyle and line of thought between them and the movement’s leaders whose ideas and orders are inconsistent with the new generation's mentality, which calls for more openness to others and to the world. This may as well be seen as a start of a rebellion against Hamas’ leadership ideas and a departure from its fundamental ideologies, since never before have Hamas members criticized the leadership’s commands to this extent.