There is no major military buildup on the Gaza border to suggest Egypt might attack the Hamas-held territory anytime soon. 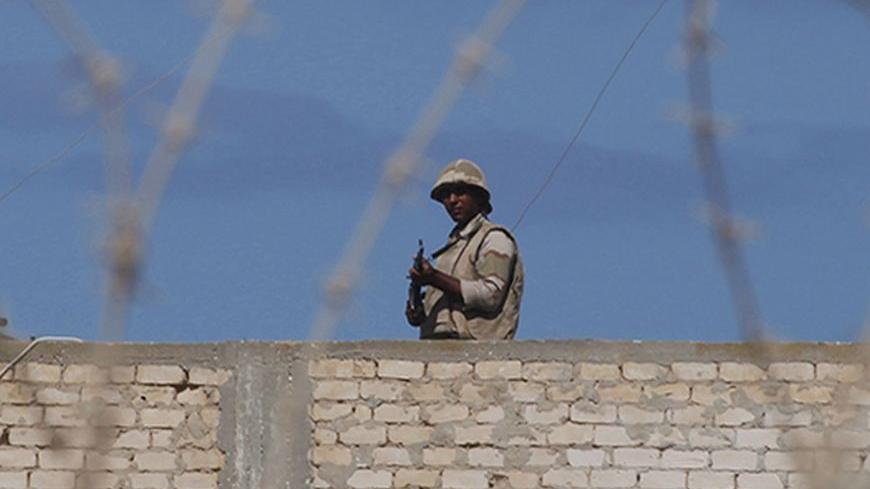 RAFAH, Gaza Strip — The border area between Gaza and Egypt that stretches for 14 kilometers (nine miles) seems totally calm — a far cry from the warnings of the Palestinian and Egyptian media about mounting tension and a security situation that is likely to explode.

On the Egyptian side, soldiers move about in their military patrol vehicles without any fear, while on the Palestinian side the National Security Force soldiers in charge of securing the area wave their hands to salute the soldiers across the border.

Al-Monitor’s correspondent saw this scene as she traveled from the midpoint of the border — where the headquarters of the National Security Force, affiliated with Interior Ministry of Gaza, is located — west to the maritime border along the Mediterranean sea. She then went the other direction, to the Rafah crossing. The Karam Abu Salem commercial crossing is the last point on the border with Egypt, where people are not allowed access. Al-Monitor was only allowed to tour the border with permission from Gaza’s Ministry of Interior, which sent a minder to accompany her.

According to the latest media reports quoting Ahmed Wasfi, the commander of the Second Army of the Egyptian armed forces in the Sinai, “Jihadists are present in the Gaza Strip, and they are downplaying the role of Egypt there.” He warned them of the wrath of the Egyptian army.

“I say to these jihadists, we will not allow you to repeat your criminal acts in the Sinai. We will cut off the heads of those who try to threaten Egypt’s security and safety,” said Wasfi, speaking to the Kuwaiti daily al-Rai.

“The Egyptian army does not attack anyone beyond its border. We will discipline anyone who tries to harm our country,” he added.

The Gaza government, on the other hand, considered these statements clear threats against the Strip. The government spokesperson, Ihab al-Ghussein, demanded the Egyptian authorities take an official position toward the repeated statements that “threaten the security and stability of the Palestinian people.”

Nevertheless, on the border, things are different. Egyptian soldiers patrol the area with their tanks, moving along the narrow strip of land between the short barbed-wire fence — which has been likely standing on the Palestinian side since the Camp David Accords — and the thick separation wall that the Egyptian authorities began to build in 2008 on their border. This area is called the Philadelphi Route.

At a distance of about 200 meters (650 feet) from the border wall lies the office of the deputy commander-general of the National Security Force for Hamas, Tarek Abu Hashim, who met with Al-Monitor. He confirmed that there are no indications of an imminent war by the Egyptian army on the Strip, adding, “The forces on the ground are not sufficient to launch any attack. This is not to mention the moral deterrent.”

Abu Hashim, who spoke with an Egyptian accent, has spent a great deal of his life in Egypt. He said, “There have been some encroachments, indeed. Reinforcements have been made since June 30, but they cannot be considered a threat to the security of Gaza.”

Under the Philadelphi Accord, following the Israeli withdrawal from the Gaza Strip in 2005, Egypt was authorized to deploy 750 soldiers on the border with machine guns and light rocket launchers. However, Abu Hashim said that after June 30, “We noticed the arrival of more heavy weapons and the deployment of two infantry regiments of 350 soldiers each. This is not to mention three heavy artillery brigades of nine military vehicles each, in addition to the deployment of the 777th Battalion, which is an infantry regiment composed of 300 soldiers, on the border opposite Tal al-Zaarab region,” he added.

When asked about the source of his information, Abu Hashim said it came “from the media of the army itself,” insisting that these reinforcements do not pose a threat to Gaza. He said, “Invading the Strip would require many times this number of soldiers. If they were expecting to face 10,000 Palestinian armed men, they will get 30,000 soldiers, and so on.”

He noticed that following the statements made by Wasfi, the patrol vehicles returned to the narrow strip of land between the two walls on the border and the arrival of new reinforcements. He said, “Before that, an Egyptian military jet violated [Palestinian] airspace twice on Oct. 2.”

Lt. Abu Mohammed, who was present during the meeting, said that verbal altercations occur from time to time, the most recent of which was on Sept.18.

“I was checking the border when an Egyptian soldier insulted me and pointed his weapon at my face,” said the lieutenant. Abu Hashim interrupted him, saying that calm had been restored later on and that the men had drunk water together.

“I asked Egyptian soldiers not to point their guns at us anymore, and they haven’t done this ever since,” Abu Hashim said.

Along the border down to the nearest Egyptian military point, to the far west right before the coastline, a few wires and poles that would be easy to circumvent separated the two territories. An Egyptian soldier stood there talking over the phone, his voice audible from the Gaza side. However, the security distance seems far greater than the geographic one.

Sgt. Ibrahim Arafat, from the Palestinian National Security Force, has been working at this border point, called al-Azba, for seven years. He told Al-Monitor, “Before, we were friends with Egyptian soldiers. We used to share conversations and have tea together. But now everything has changed. Even officers and soldiers have been replaced.” He also said that sometimes Egyptian tanks are positioned opposite their locations, but without threatening them.

It is worth noting that there is a National Security Force checkpoint every two kilometers (1.2 miles). On the other side, there is an Egyptian watchtower. One can clearly see the buffer zone beyond the Egyptian border standing on the al-Zaarab hill, which is the highest point along the border. We could also spot the empty buildings on the Egyptian side. Military barricades are deployed and soldiers are on the roofs of the buildings, but their guns are not directed toward the Strip.

The crisis reached its peak in mid-September, when the spokesman for Egypt’s armed forces confirmed that large stores of ammunition labeled with the name of “al-Qassam Brigades” had been seized.

According to Col. Ahmed Mohammed Ali, “The Egyptian army discovered wires connected to electronic circuits mounted with bombs along the border between Egypt and Gaza that are controlled from the Strip. This means that Hamas-affiliated members are targeting the Egyptian army.”

Al-Monitor also obtained information from a Palestinian security source who, speaking on the condition of anonymity, said that from July 25 to Sept. 11, there were 27 violations on the part of the Egyptian army. These included firing at fishermen, jets crossing into Palestinian airspace, cheering for Defense Minister Abdel Fattah al-Sisi, taking photos of Palestinian locations and hurling insults.

On the border, near the Karam Abu Salem crossing, Al-Monitor met with a sergeant in the National Security Force who went by the name of Abu Ahmed. He works at the last military point on the eastern border with Egypt, called 5-5. He spoke with a Bedouin accent.

“Less than a month ago, we were shot at from the Egyptian side. We all lay down on the ground,” Abu Ahmed noted, claiming that the shots were most likely stray bullets. He stressed that no gunmen from Gaza are allowed to fire at the Egyptian army.

“They say we are affiliated with Hamas or [Izz ad-Din] al-Qassam [Brigades], but we are members of the National Security Force. We have orders not to attack any one of them,” he added.

One leaves the border with the impression that peace prevails and that violations on the part of either side are rare accidents. However, a political decision could change this fact at any moment, as is the case with the region of the tunnels. It was a short while ago a bustling industrial zone, and now it has become a deserted area, except for some dogs lying on dirt piles.

Asmaa al-Ghoul is a columnist for Al-Monitor's Palestine Pulse and a journalist from the Rafah refugee camp based in Gaza.