Gaza's eastern frontier is seeing increased military activity from both Israel and Hamas as the latter seeks to clamp down on rogue rocket attacks. 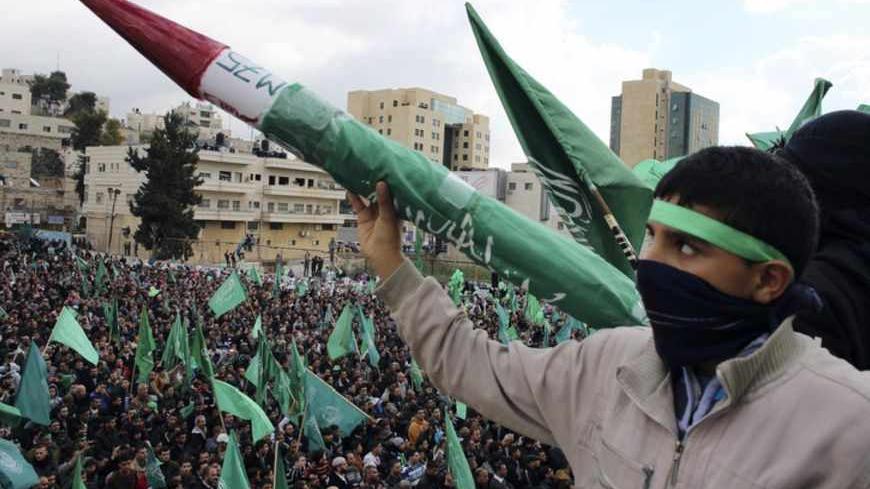 A Palestinian youth holds a model of a Hamas-made rocket during a rally in the West Bank city of Hebron, marking the 25th anniversary of the founding of Hamas, Dec. 14, 2012. - REUTERS/Ammar Awad

At the time of this writing, Israel had shelled several Gaza Strip locations in response to rockets of unknown origin being launched against its territories from Gaza’s eastern border, in a new wave of what Palestinians have come to describe as “sporadic fire” between the two sides.

The Israeli air force dominated Gaza’s airspace during the last war of November 2012, conducting an average of 1,500 sorties in which it bombed various parts of the Strip, destroying 19 of Hamas’ headquarters and field offices, as well as targeting 980 underground guided-rocket platforms, 140 smuggling tunnels, 42 command centers, 26 weapons manufacturing and stockpiling sites, in addition to dozens of short- and medium-range rocket systems.

After war’s end, the Israeli army adopted a new tactic whereby its air force markedly cut down on the number of sorties, except to perform occasional mock raids over Gaza. This change was driven either by a desire not to provoke Hamas, the Israeli air force’s preoccupation in missions over other areas, or a belief that the Strip was calm and did not require constant and intensive overflights.

In contrast, the role played by Israeli infantry and ground forces has increased, and the eastern land border area has remained active following the end of Israeli operations against Hamas on Nov. 22, 2012 because those areas were closest to Israel’s heartland and formed a launching pad for rocket fire against vital targets located in its southern settlements and cities, particularly Sderot, Ashdod, Ashkelon and Beersheba.

In addition, Hamas’ eastern border region is mainly agricultural and lies within range of Israeli artillery, which targets the area on a near daily basis. It can therefore be described as a besieged area that can be easily overrun militarily every once in a while, as was seen during the last few weeks, when Israeli military patrols conducted limited incursions into this eastern border region, mostly late at night to early morning hours, and then withdrew, after razing a few trees and agricultural fields and injuring some Palestinian farmers.

Israel, from its end, justifies these incursions by affirming possessing intelligence information pointing to Palestinians digging tunnels in these areas, to prepare themselves for the next round of hostilities and perform operations similar to the ones that occurred in the Jabal Kashef area northeast of Gaza City during the 2008-09 war, when units of Hamas’ military wing, the Izz al-Din al-Qassam Brigades, succeeded in infiltrating behind encroaching Israeli forces east of the hill, and destroyed several military vehicles with explosives charges.

Armed Palestinian factions view Israel’s repeated incursions into Gaza’s eastern border, despite the declared truce with Hamas, as being meant to destroy tunnels dug by Palestinians, who previously used them against Israeli soldiers, in what the latter described as “a war with ghosts, because they could not detect the militants who suddenly rushed at them from beneath the ground. Israeli soldiers moved above ground, all the while feeling that under their feet lay a veritable subterranean city.”

It has become customary during the last few weeks for Israeli incursions into eastern Gaza to last for a few hours, during which tanks and other military vehicles move out of their positions along the Gaza border to occupy their assigned targets, conduct operations, and return from whence they came inside Israel, in a tactic that the army dubs “fighting on the other side.” This entails conducting land incursions that do not require taking up positions inside Gaza for extended periods of time and aim to achieve tactical deterrence objectives.

After the end of the last war, the Israeli army sought, through conducting short raids by ground forces, to effectively create a buffer zone on Gaza’s eastern border. A field tour of the area showed this Al-Monitor correspondent that these incursions are limited to an uninhabited strip of agricultural land and do not entail occupying the inhabited areas of Beit Hanoun and Beit Lahia in the north nor al-Breij and al-Maghazi in the east, which Hamas militants call “protection zones” in which advancing Israeli forces can be met with explosives charges, ambushes and mortar fire.

Leaked information from the Palestinian side of the border indicates that the Hamas-led government is beginning to deploy dozens of its militants to the eastern border in order to prevent rocket fire against Israel, which would constitute a breach of the truce.

Although Hamas did not officially announce, confirm or deny taking such a decision, a prominent source inside the organization confirmed to Al-Monitor that Izz al-Din al-Qassam Brigades fighters had been deployed to Gaza’s border areas in lieu of civilian police to prevent the launching of rockets from Gaza against nearby Israeli communities. This followed Gaza’s interior ministry decision to withdraw its “Field Monitoring” units from all areas except official security points near the border, which were replaced by members of the al-Qassam Brigades.

The source added that Hamas is diligently striving to prevent an escalation with Israel in the Strip by reining in some of the armed groups that, from time to time, launch rockets or fire mortar shells. It therefore has bolstered its field units with additional new forces endowed with modern weaponry and tactics; its members patrol the border areas wearing both military and civilian garb.

Despite the lack of accurate figures pertaining to the real number of militants assigned to these security units, information from sources close to Hamas indicates that they are close to 2,000 soldiers, whose salaries are paid by the government. These units’ task is to patrol the border areas with Israel, monitor the security situation and perform field operations that entail preventing the launching of rockets or the planting of explosive devices.

Hamas’ decision came as a result of some Salafist elements recently firing rockets toward Israel, which in turn threatened to harshly retaliate against Hamas. The latter therefore decided to deploy al-Qassam members to forward positions along the eastern border with Israel, where they set up fixed and mobile checkpoints used to search vehicles and individuals traveling in the area. They also were deployed to other areas farther away from the border, which were also previously used to launch rockets against Israeli targets.

In researching for this article, Al-Monitor received a special report issued by the Hamas government, which described the field monitoring units as being organizationally under the control of the General Department of Military Affairs at the Ministry of Interior deployed to all of Gaza’s eastern border regions, and whose tasks include pursuing and apprehending collaborators with Israeli intelligence services when they attempt to cross to the Israeli side of the border.

Ayman Naufal, the al-Qassam Brigades leader who returned to the Gaza Strip after being released from an Egyptian jail following the revolution there, and who is one of the most wanted men in Israel, confirmed during his tour with a number of Palestinian security officers the importance of field  monitoring forces, because they serve two main purposes: to thwart collaborators from using the eastern border, and prevent what he called “security lawlessness” from occurring, especially on the part of some armed factions, which he described as “suffering from naive jihadist exuberance,” which unilaterally fire rockets against Israel.

Finally, the situation on the ground in Gaza’s eastern border confirms that calm will continue to prevail there until further notice as both Hamas and Israel try to maintain the peace for the longest possible period of time, before this 40 kilometer (25-mile) border that extends from Rafah in the south to Beit Hanoun in the north once again ignites another Israeli war on Gaza.

Adnan Abu Amer is dean of the Faculty of Arts, and head of the Press and Information Section as well as a lecturer in the history of the Palestinian issue, national security, political science and Islamic civilization at Al Ummah University Open Education. On Twitter: @adnanabuamer1