The tunnel recently discovered between Gaza and Israel may have been designed for kidnapping Israeli soldiers or for military operations in Israel. 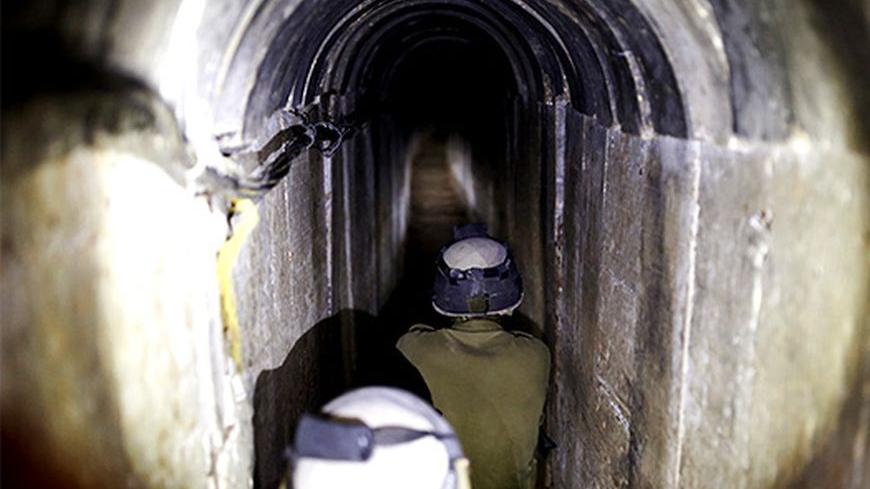 GAZA CITY — There has been a lot of talk in the Gaza Strip about the Israeli army’s announcement on Oct. 10 that it had discovered a tunnel dug by Palestinians from east of Abasan, in southern Gaza, to the nearby kibbutz of Ein Hashlosha, in Israel.

During a tour of the area near the tunnel's discovery, Al-Monitor learned from Palestinian military sources that the passageway lies 20 meters underground, is 2.5 kilometers long, and has a ceiling high enough to accommodate a man of average height. The tunnel is also remarkably wide. Its construction required 800 tons of concrete and cost an estimated $10 million. Some 100 workers toiled on it for more than two years. It was equipped with a communications network and electricity and contained stockpiles of cookies, yoghurt and other foods to allow for stays of several months.

Major General Shlomo “Sami” Turgeman, head of Israel’s Southern Command, asserted that only Hamas could afford to fund such a project. In a speech attended by an Al-Monitor correspondent on Oct. 19, the Hamas government prime minister, Ismail Haniyeh, asserted that thousands of “resisters” are preparing to face the Israeli army “above and below ground,” in a reference to the tunnel.

A few hours before Haniyeh’s speech, Izz al-Din al-Qassam Brigades spokesman Abu Obeida confirmed that Hamas had been responsible for the tunnel and that it had been dug by Hamas gunmen looking for ways to hit Israel and kidnap its soldiers. He promised Israel more horror and concern from surprises being organized by the brigades.

In the past few days, Israeli intelligence launched an investigation to identify who had dug the tunnel, who had helped them, and who had given Hamas the house from which the tunnel was dug. The investigation involves calling Palestinians by phone and provoking debates about the tunnel on social media in an attempt to collect as much information as possible, no matter how seemingly insignificant.

A Palestinian activist with extensive experience digging tunnels along the border with Egypt told Al-Monitor, “If there was a military confrontation with Israel, it is clear that the outcome would be very different with Hamas having this tunnel. This means that the discovery has prevented attempts to kidnap soldiers or settlers living near Gaza’s borders. The tunnel diggers in Gaza know where the security fence sensors are located and know how to jam them, including the unmanned aircraft that hover above Gaza around-the-clock and take X-ray images of Earth’s surface.”

Al-Monitor also met with a tunnel digger in Gaza who described how Hamas elements go underground for long periods of time to dig the passageways. He explained, “The drilling is done via a mechanical device, not an electric one, to avoid making noise. It uses a [pedal-powered] chain, similar to a bicycle chain. [The chain] moves metal pieces that dig through the dirt. During the digging, the digger lies on his back and pedals with his feet.”

While the tangible purpose of the recently discovered tunnel was for kidnapping one or more Israeli soldiers, Al-Monitor learned from discussions among armed groups in Gaza that the concept behind the tunnel involved something said by Yahya al-Sinwar, a Hamas Political Bureau member released in a prisoner exchange and the founder of its armed wing.

Sinwar observed that Hamas had become powerful and therefore had a lot of options. He said that Israel should know that the military equation had dramatically shifted in favor of the Palestinians and that Hamas should make plans consistent with this change to enshrine the new principle: “Today, we are the ones who invade the Israelis. They do not invade us.”

In an attempt to explain this shift in Hamas’s military thinking and its connection to the tunnel, military personnel in Gaza told Al-Monitor that one of the tunnel’s functions was for conducting an operation behind Israeli lines if the Israelis conducted an operation against Gaza from Israeli territory. This conflicts with previous analysis in Al-Monitor contending that Hamas had merely sought through tunnel digging to keep its fighters occupied. The military source claimed that Hamas fighters are ready to confront the Israeli army.

In preparing this report, Al-Monitor’s correspondent toured Gaza’s eastern and southern borders and observed the Israeli military, after its discovery of the tunnel, reinforcing its positions there and all along the armistice line at the far eastern edges of the Khan Younis and Rafah districts.

Palestinians revealed that the Israeli army had conducted a comprehensive survey using various electronic devices. Three Engineering Unit vehicles had arrived for the first time at the border, carrying detection equipment and moving slowly, stopping at the areas where they suspected tunnels. They drilled in places and carefully combed the area, especially rugged terrain and areas of dense trees.

Palestinians in the area showed Al-Monitor a document distributed to Palestinian military groups. It read, “The tunnel war is one of the most important and most dangerous military tactics in the face of the Israeli army because it features a qualitative and strategic dimension, because of its human and moral effects, and because of its serious threat and unprecedented challenge to the Israeli military machine, which is heavily armed and follows security doctrines involving protection measures and preemption.”

The document continued, “The tunnel tactic is dangerous because it doesn’t use traditional conditions and procedures for confrontation. [The tactic is] to surprise the enemy and strike it a deadly blow that doesn’t allow a chance for survival or escape or allow him a chance to confront and defend itself. [The tactic] relies on the calm work of digging an underground tunnel by simple means and equipment and working without making noise, according to pre-prepared geographic coordinates, and without appearing on the ground’s surface.”

The author or authors of the document wrote that the discovered tunnel shows that the underground war will be one of the most important challenges facing Israeli forces. They envision the tunnels playing a major role in battle and cite how US forces in Vietnam failed to address the challenge of the tunnels used by the Viet Cong during the Vietnam War.

by Murielle KASPRZAK and Joseph SCHMID | AFP | May 26, 2022
END_OF_DOCUMENT_TOKEN_TO_BE_REPLACED