Gazans reluctant to import from Egypt despite Hamas’ encouragement

Although Hamas reduced fees imposed on goods entering the Gaza Strip, it seems local traders are hesitant to import from Egypt, which imposes high fees on traded products. 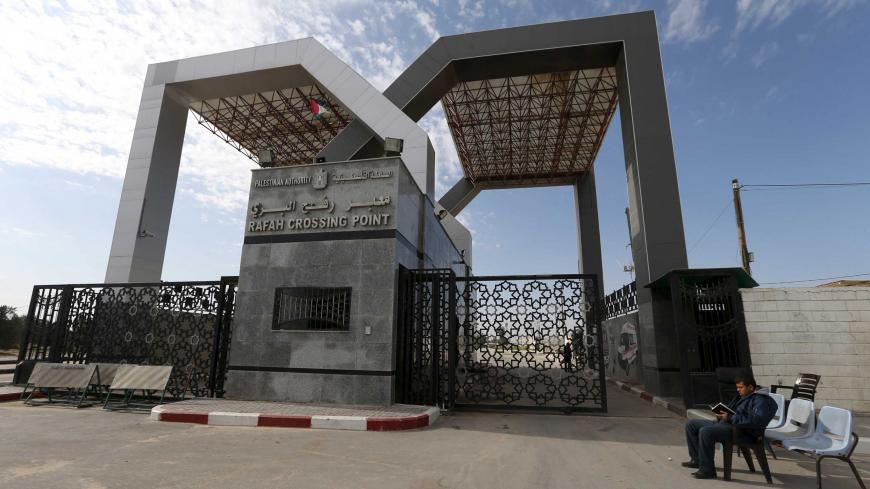 A member of Palestinian security forces loyal to Hamas reads a Quran as he keeps guard outside the gate of the Rafah border crossing with Egypt, in the southern Gaza Strip, Feb. 5, 2016. - REUTERS/Ibraheem Abu Mustafa

GAZA CITY, Gaza Strip — As Hamas seeks to bolster trade between the Gaza Strip and Egypt through the Rafah border crossing to improve returns for its treasury, Gazan traders seem reluctant to import Egyptian merchandise.

Hamas’ treasury has been weighed down by an ongoing economic crisis since 2015, in part due to Egypt’s destruction of underground tunnels between Gaza and Sinai that began in 2013.

This means goods are no longer smuggled through such tunnels. Gaza traders are instead importing Egyptian goods through an informal gate near the Rafah border crossing run by Hamas.

A high-ranking source in the Hamas-run Ministry of National Economy in Gaza told Al-Monitor on condition of anonymity, “Gaza traders are increasingly reluctant to import Egyptian merchandise. As a result, revenues that Hamas makes through taxes on merchandise have dwindled.”

Hamas’ Ministry of Finance would collect about $6.5 million monthly from taxes imposed on goods entering Gaza through the Saladin gate. But the source said this amount has significantly dropped due to the dwindling imports from Egypt. In January, Hamas collected only $2.15 million, the source said.

He said Hamas imposed a 16% value added tax (VAT) on imported goods. But in early February, the Ministry of National Economy reduced the tax to 10% in order to encourage imports from Egypt, the source added (Hamas does not make such decisions public).

The source said Gaza traders’ reluctance to import from Egypt stems from the fees imposed by Egypt on Gaza traders for transferring Egyptian merchandise and ensuring their arrival to Gaza through Sinai, where security conditions are volatile.

Trade relations between Gaza and Egypt witnessed an improvement in June 2017 in the wake of understandings between Hamas and Egyptian officials. The understandings aimed at opening a trade line between Gaza and Egypt through the Saladin gate next to the standard Rafah crossing used for the movement of people only. The Saladin gate is non-official and controlled by the Hamas security services.

The Saladin gate was built in 1982 before the PA’s establishment, as per understandings between Egypt and Israel. The gate would serve as a gateway for Palestinians to take care of their lands in Rafah on the borders between Egypt and the Gaza Strip, which was then under Israeli military administration. Israel would give Palestinians daily permits to cross into Rafah. After the PA took over governance of Gaza in 1994, the gate was closed, until Hamas reopened it in 2017 under the agreement with Egypt.

According to the source, imports from Egypt include foodstuffs and raw materials such as wheat, cooking oil, construction materials, natural gas and vehicle fuel.

Mohammad Abu Jiyab, the editor-in-chief of Al-Eqtesadia newspaper in Gaza, told Al-Monitor, “Trade relations between Gaza and Egypt come with strings attached for Gaza traders. No trader can buy merchandise from Egyptian companies and factories directly and transport them to Gaza freely. According to the [2017] understandings, imports from Egypt to Gaza take place through a single Egyptian broker, which is the Sons of Sinai Company. The latter handles transporting merchandise from Egypt to Gaza through Sinai and imposes high fees on Gaza traders under the description 'insurance and transportation procedures.'”

Sons of Sinai Company is a private shipping company, and it is the only company tasked by the Egyptian authorities with moving merchandise from Egypt to the Saladin gate. The fees imposed by the Egyptian company vary and depend on the weight and nature of the merchandise being exported to Gaza.

Fares al-Wadie, a Gaza trader importing cooking oil from Egypt, told Al-Monitor, “Last month, I imported a shipment of Egyptian cooking oil worth $30,000. The shipment can be sold in Gazan market for $40,000. With that, I could have made $10,000 in profit. But the Egyptian brokering company that ships the merchandise to Gaza imposes additional fees under the ‘insurance and transportation’ category worth $5,000. As a result, the total profit when selling shipments in Gaza dropped to $5,000.”

Wadie said the VAT imposed by Hamas when the oil enters through the Saladin gate further reduces his profits.

He added, “I now import rice from other countries such as Israel through the Kerem Abu Salem crossing, and I make a better profit than importing Egyptian rice.”

He said Hamas’ tax reduction from 16% to 10% on imported goods in the Saladin gate “did not help much in encouraging trade with Egypt due to the high costs of moving and supplying Egyptian merchandise.”

Hamas has repeatedly asked Egypt to open the Rafah crossing permanently and turn it into an official trade crossing.

Hamas’ financial crisis worsened after it handed over the Israeli-run Kerem Abu Salem crossing to the Palestinian Authority (PA) in November 2017, as per the reconciliation agreement. But on Feb. 19, Hamas regained control of the crossing after PA employees abruptly withdrew in protest of security checks Hamas imposed on them. The PA workers also accused Hamas of interfering in their work by inspecting trucks coming into Gaza through the crossing.

Moueen Rajab, a professor of economics at Al-Azhar University in Gaza, told Al-Monitor, “Hamas regaining control of the Kerem Abu Salem crossing will help ease its financial crisis. This is because Hamas will collect around $20 million monthly through the 16% VAT imposed on the goods entering Gaza through this crossing.”

Hamas politburo member Mahmoud Al-Zahhar told Al-Jazeera channel Jan. 11 that Egypt is planning on opening an official trade crossing with Gaza. He said this step will be profitable for Gaza and Egypt alike, adding, “We do not need trade with Israel or another country, and we do not want any trade crossing with Israel.”