The Palestinian Authority has recently asked Egypt to take over the Gaza crossings once again in what officials say is aimed at controlling the projects to be developed under the truce between Hamas and Israel. 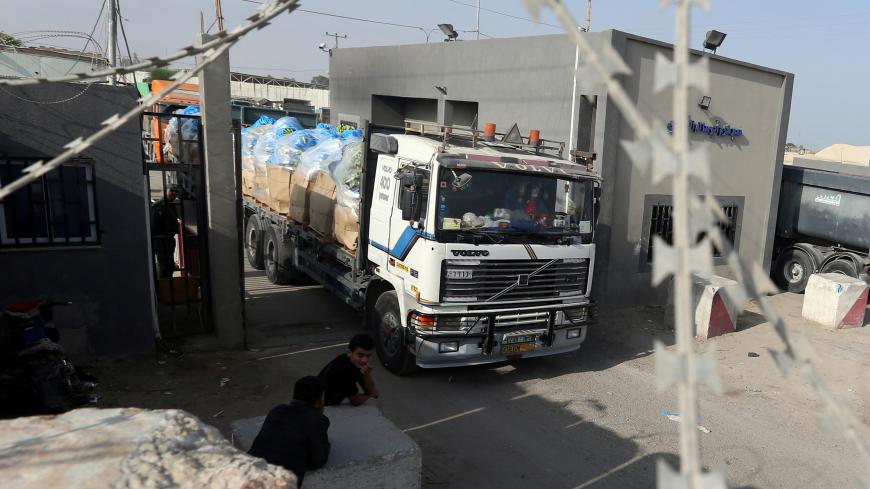 GAZA CITY, Gaza Strip — Abdullah Abdullah, a member of Fatah's Revolutionary Council, told Al-Monitor that the Palestinian Authority (PA) has asked Egypt to take over management of the Gaza Strip crossings as per the Palestinian reconciliation agreement signed October 12, 2017.

Abdullah said both the PA and the movement sent a delegation to Cairo in mid-April for a few days to meet with Egyptian officials and discuss the implementation of the agreement.

The delegation included Azzam al-Ahmad, who heads the reconciliation file in the Fatah movement, and Rouhi Fattouh, the commissioner of international relations in Fatah, among other representatives of the PA.

Abdullah said discussions with the Egyptians included the Gaza Strip crossings and “the PA’s responsibility to provide whatever services it can provide to the Palestinians."

There are two main crossings in Gaza, namely the Kerem Shalom commercial crossing and the Rafah crossing for individuals.

This Fatah initiative comes after the announcement in late March of understandings between Israel and Hamas in the Gaza Strip under the auspices of Egypt. Under these understandings, Israel approves international aid and development projects and allowing more trucks and products to go through the Kerem Shalom commercial crossing, especially after PA employees withdrew from it on Feb. 17 and Hamas took over its administration.

“The PA was indeed deployed at the Gaza crossings, but its presence was only a formality, as Hamas was effectively controlling the crossings and collecting taxes, which led us to withdraw the PA staff from the crossings,” the Fatah leader said.

According to Abdullah, the delegation will suggest taking over “everything” in the Gaza Strip, including the collection of taxes at the crossings.

Abdullah said the PA and the movement are waiting for a response from Egyptian officials while Egypt is waiting for the other party’s response, meaning Hamas.

Usama Nofal, director of planning and policy at the Ministry of Economy in Gaza, told Al-Monitor that during its management of the Kerem Shalom commercial crossing, the PA made huge revenues through taxes.

Nofal said the PA collected 15 million shekels a month (around $4.2 million) from the Kerem Shalom commercial crossing, but these revenues fell to 8 million shekels (around $2.2 million) this year due to the drop in imports and the low purchasing power.

He said that the PA has now lost this monthly revenue because its staff withdrew from the crossings.

Raed Fattouh, head of the coordination committee for the entry of goods at the Kerem Shalom crossing in Gaza, told Al-Monitor that between 300 and 400 trucks enter Gaza every day, and the Kerem Shalom commercial crossing is operational despite the absence of the PA staff.

Nofal believes the reason the PA is once again asking to take over the Gaza crossings is that it wants to control the international assistance and development projects that are to be implemented in Gaza in the framework of the recently concluded understandings. Also, he added, the PA wants to control the movement of goods and individuals entering the Gaza Strip.

Of note, the understandings stipulate expanding the fishing zone in the Gaza Strip to 15 nautical miles, up from the previous limit of 9 nautical miles. They also stipulate reducing the list of dual-use items and allowing $30 million a month in Qatari aid into the territory until the end of the year. In addition, the understandings stipulate increasing employment programs through international institutions such as the United Nations and offering 40,000 job opportunities over the course of six months, as announced by Hamas leader in Gaza Yahya Sinwar.

The continued opening of the Kerem Shalom crossing is also part of the truce.

Omar Shaaban, director of the Pal-Think for Strategic Studies, told Al-Monitor the PA staff are no longer deployed at the Kerem Shalom commercial crossing as Hamas has returned to the crossing. “This has to do with reducing the PA prerogatives in Gaza,” he added.

Shaaban said the PA’s attempt to take over the crossings once again is a matter of sovereignty, “as it would not be appropriate for the PA to return to an area whose border crossings it does not control.”

Add to this, he said, that taking over the crossing would generate significant financial revenues for the PA amid its financial crisis.

Kerem Shalom is the only commercial crossing through which goods, foodstuffs, supplies, building materials, fuel, medical supplies and medicines enter the Gaza Strip. The crossing is to serve as the main gateway for the implementation of the truce between Hamas and Israel and the passage of aid and development projects, and this may justify the PA's official request to take over the Gaza crossings once again.