The only commercial crossing into the Gaza Strip has been closed by truck drivers in protest of increased fees levied on crucial imports. 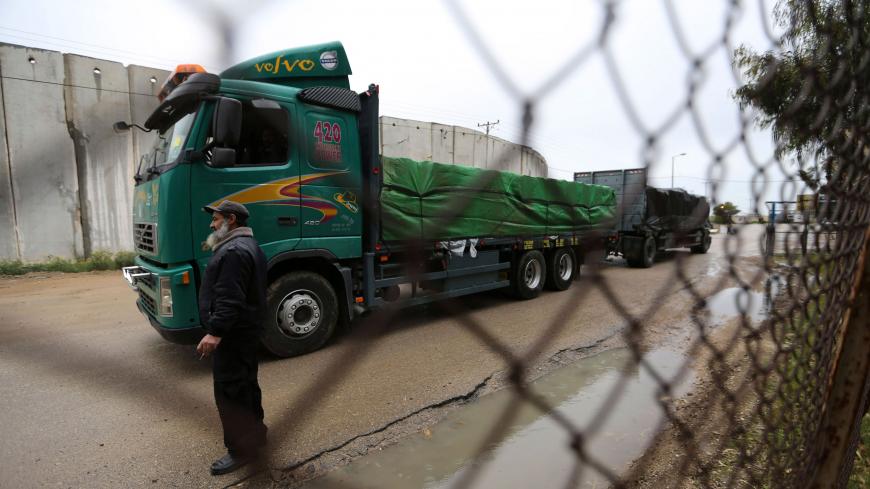 A Palestinian policeman stands guard as a truck loaded with fruits and vegetables waits to cross through the Kerem Shalom crossing in Rafah, southern Gaza Strip, March 12, 2015. - REUTERS/Ibraheem Abu Mustafa

GAZA CITY, Gaza Strip — A truckers strike has paralyzed the movement of commercial goods into and out of the Gaza Strip.

Work at the Kerem Shalom border crossing, the only commercial crossing into the Gaza Strip, has been suspended since Nov. 5, when the Land Transportation Association announced the suspension of work in response to the Palestinian Authority's decision to increase taxes by 30 shekels (about $8) on each truck bringing in goods.

"We can't afford this increase, as it will be taken out of the drivers’ pockets,” Land Transportation Association Secretary Jihad Salim told Al-Monitor.

He said negotiations are ongoing with the crossing's management in an attempt to end this crisis.

Some 450 to 550 trucks typically use the crossing each day, according to Salim.

Driver Saed Sharafi told Al-Monitor he bristled at the decision by the PA's Crossing and Borders Authority to raise taxes, but expressed the truckers' desire to resume work once the matter is resolved.

When the PA split violently in 2007, Hamas took over the administration of the Gaza Strip and Fatah under PA President Mahmoud Abbas retained control in the West Bank. However, the PA still holds the purse strings of both Palestinian territories.

As part of a reconciliation effort, the parties agreed to form a unity government in October 2017. In that arrangement, Hamas turned over control of the border crossings to the PA the following month. The PA briefly suspended the crossings' fees and taxes, but reimposed the charges in January 2018.

Now, according to Salim, the PA wants even more money.

But Raed Fattouh, head of the Presidential Committee for the Coordination of Goods at the Crossing and Borders Authority, said the PA is not imposing any new fees, but just restoring them to what they were before the PA split in 2007.

Fattouh blamed the transport association for obstructing the work at the Kerem Shalom crossing, warning that it would cost Palestinian merchants heavy losses. If the strike continues, it could worsen the already-lopsided trade deficit, he said.

Maher Tabbaa, public relations and information director at the Gaza Chamber of Commerce and Industry, noted the Kerem Shalom crossing is vital for commodities such as petroleum products. Like Fattouh, he warned that closing the crossing for long will lead to a crisis affecting the daily lives of Gazans.

He noted that the current stoppage will especially hurt clothing exports.

“The Gaza Strip’s clothing merchants are getting ready, with the onset of winter, to send their shipments to Israel,” he said, explaining that Palestinian merchants will face heavy losses if they have to pay for storage in Israeli warehouses at the crossing or at Israeli ports.