Israel recently announced plans to reopen the Erez/Beit Hanoun crossing into Gaza, but many say it is not enough to relieve Gaza’s devastated economy. 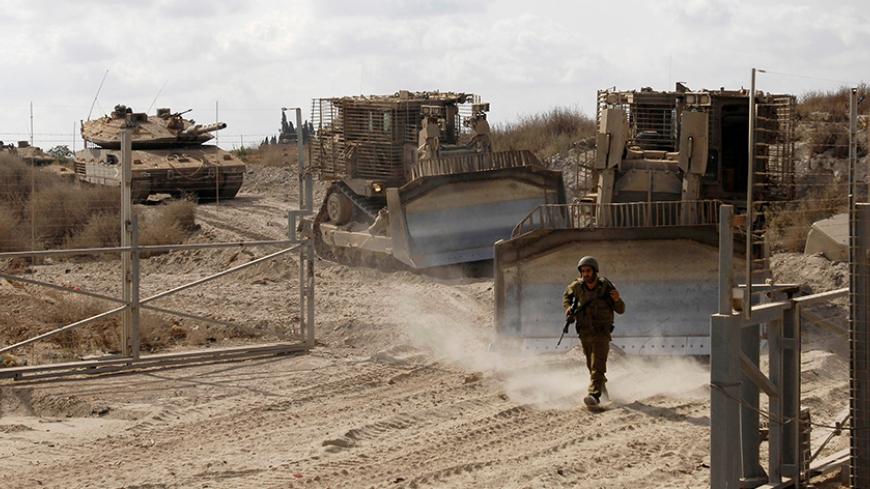 Israeli army vehicles roll into Israel near the Erez crossing between Israel and the Gaza Strip after a military operation in Beit Hanoun in the northern Gaza Strip, Oct. 29, 2007. - REUTERS/Amir Cohen

GAZA CITY, Gaza Strip — Israeli Defense Minister Moshe Ya'alon announced on May 3 that Israel would reopen the Erez/Beit Hanoun crossing in northeastern Gaza, after eight years of closure, to allow the entry of goods. Among the reasons for the opening, Ya’alon cited relieving pressure on the Kerem Shalom border crossing in southeastern Gaza, the only point through which goods and humanitarian aid are currently allowed to enter. Around 500-700 trucks make the crossing daily. Some 50% of the goods now entering through Kerem Shalom will arrive via Erez/Beit Hanoun, according to Ya’alon.

Nazmi Muhanna, director-general of the Palestinian Authority’s (PA) general administration for border crossings, told Al-Monitor that gradual Israeli steps, like opening the Erez/Beit Hanoun crossing, will not solve the economic problems plaguing Gaza, which has been under siege for almost 10 years. “Even if the Erez/Beit Hanoun crossing were opened for trade, the economic situation would remain as is,” said Muhanna. “All commercial crossings must be opened, since the basic materials that enter into Gaza through Kerem Shalom only covers 15-20% of Gaza’s needs.”

Although Israel has informed the PA of its decision to open Erez/Beit Hanoun for trade, Muhanna said it is unsuitable as a commercial crossing in its current state and would require months of work to rehabilitate it.

Abdul-Fattah al-Zeri, assistant deputy for the minister of economy in Gaza, hopes the reopening will ease the financial burden on traders in northern Gaza in terms of transport, since they now have to drive some 45 kilometers (28 miles) south, to the Kerem Shalom crossing, at the Gaza-Israel-Egyptian borders, to pick up shipments. Use of the Erez/Beit Hanoun puts them closer to goods destined for northern Gaza via Israeli truckers transporting them from Israeli ports and markets.

Zeri told Al-Monitor that the Kerem Shalom crossing had been intended for the transport of Egyptian aid to Gaza in light of the Agreement on Movement and Access, signed between Israel and the PA in 2005. Israel, however, imposed a blockade on Gaza after Hamas seized control of the territory in 2007. Kerem Shalom becoming the only crossing through which goods could enter after Israel destroyed and closed all six Israeli commercial crossings with Gaza that year.

Zeri said that the Erez/Beit Hanoun crossing could indeed, with rehabilitation, function as a commercial crossing for imports and exports. Before the 2000 intifada, the area around the crossing on the Palestinian side had been dedicated to receiving workers and included an industrial zone that Israel shut down and destroyed in June 2004. He hopes the opening will facilitate exports from Gaza, which at one point sent products through the Karni crossing, in the east, at a rate of 200 trucks a day, loaded with agricultural products, food and construction materials and chemicals destined for the West Bank, Arab countries and Europe. After the Israeli army closed the crossing and destroyed its facilities in 2012, exports from Gaza ceased.

With the closure of the Israeli commercial crossings (excepting Kerem Shalom), Erez/Beit Hanoun was reserved for transit by people. This situation tightened the noose on Gazans and significantly contributed to the destruction of the Palestinian economy, according to a report issued May 11 by the United Nations Relief and Works Agency.

Shanti hopes Israel will go through with the decision to open Erez/Beit Hanoun along with the other crossings as soon as possible, so Gaza can recover and end the recession that has plagued the Strip for almost a decade. Implementation of the Erez/Beit Hanoun decision will require months of development and construction work to make it operational.

Maher al-Tabbah, director of public relations and media at the Chamber of Commerce in Gaza, explained that for him the issue is not about one or two crossings. It is about the type of goods allowed to enter the Gaza Strip. Those permitted entry through Erez/Beit Hanoun will be no different from those entering through Kerem Shalom, he remarked to Al-Monitor.

Tabbah noted that Israel currently bans 300 types of goods and basic supplies, including agricultural products, raw materials used in food production, cleaning products, some building materials and auto parts. Israel justifies the ban on these goods by claiming that they can be used for military purposes in addition to their primary functions.

As for why the Erez/Beit Hanoun crossing is being reopened, Tabbah does not believe it is linked to ongoing Turkish-Israeli talks to restore relations, frozen since the 2010 Israeli raid on the Gaza Freedom Flotilla, or threats by Hamas ​on April 28 to escalate the situation over the ongoing siege. Regardless, in the meantime, Palestinians simply hope for more border crossing openings and economic relief.