Egypt announces deal to reopen Rafah crossing, but when will it actually open?

Despite the fact that opening the Rafah crossing is an urgent humanitarian need for Gaza residents, it remains subject to political considerations associated with the quarreling factions: Hamas and Fatah. 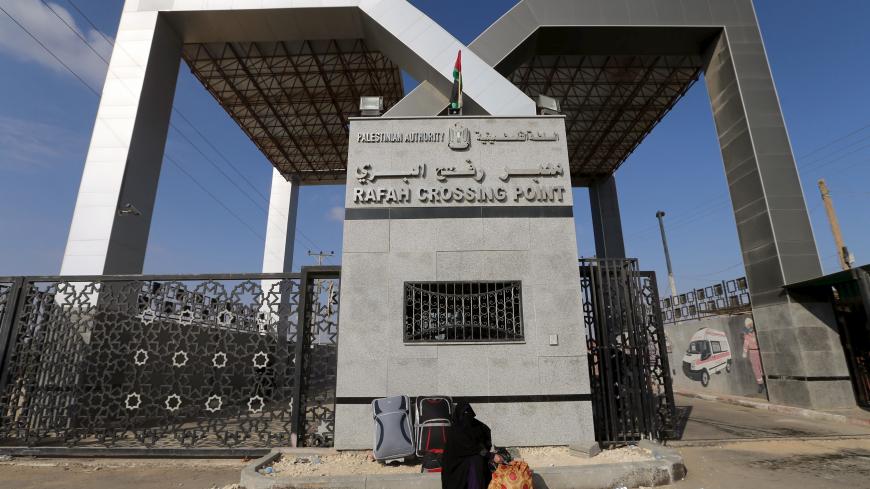 A Palestinian woman sits in front of the gate of the Rafah border crossing as she waits for a travel permit to cross into Egypt, in Rafah in the southern Gaza Strip, June 14, 2015. - REUTERS/Ibraheem Abu Mustafa

GAZA CITY, Gaza Strip — Azzam al-Ahmad, member of Fatah’s Central Committee, said in a press statement on Nov. 18 that an agreement has been reached with Egypt to reopen the Rafah crossing in the next few days for passengers and goods according to new arrangements. This raised questions among Hamas officials, as the movement controls the crossing and has repeatedly insisted it will not hand it over to the Palestinian Authority (PA) unless it is part of the crossing management.

Meanwhile, Egyptian authorities have kept the crossing almost totally closed since July 2013 given the security tension in the Sinai Peninsula, opening it only for a few short days to allow the passage of humanitarian cases. This was confirmed by the Ministry of Interior’s website, which reported that, since the beginning of 2015, it was open for only 19 days.

In this context, Kamel Abu Madi, undersecretary of the Ministry of Interior and National Security in Gaza, stated through the ministry’s website Nov. 16 that 25,000 humanitarian cases waited in Gaza for the crossing to open.

In his statement, Ahmad said that the agreement entails giving travel priority to students, the sick and those working abroad who hold travel visas or residence permits issued by other countries. The travel of natives will be subject to "Egyptian considerations," in reference to the security situation in north Sinai, close to the border with the Gaza Strip.

Ahmad, however, did not mention anything on how to implement the agreement given that Hamas continues to control the Rafah crossing.

The problem with the Rafah crossing lies in the fact that the Egyptians refuse to deal with Hamas in managing the crossing, demanding instead that it fall under sole control of the PA. The Egyptian ambassador to the PA, Wael Attia, confirmed this on March 4, when he stated, “Opening Gaza crossings, especially the one in Rafah, shall occur when they are handed over to the Palestinian presidency.” He stressed that dealing with other parties (Hamas) comes within the context of sponsoring the reconciliation only.

However, Yousef Rizqa, a Hamas leader and adviser to former Gaza Prime Minister Ismail Haniyeh, told Al-Monitor, “Hamas heard about the agreement in the news only. The movement did not receive any information to this effect, and Fatah did not invite it to discuss the reopening of the crossing.”

As a precondition to handing it over to the PA, Hamas demands that it (Hamas) be included in the management of the Rafah crossing. In this regard, Rizqa told Al-Monitor, “Hamas welcomed the presence of the PA at the Rafah crossing. But managing said crossing must be in accordance with the principle of administrative partnership, which was agreed upon in the reconciliation agreement in April 2014.”

A Fatah political leader confirmed Ahmad’s statements, and told Al-Monitor on condition of anonymity, “Abbas discussed with the Egyptians the mechanism for opening the Rafah crossing. But, if its conditions were not met, Hamas refuses to hand the crossing over to the PA. Said conditions include allowing the presence of 60 of its [Hamas'] employees, who would take part in the management of the crossing, in addition to receiving Egyptian guarantees giving Hamas leaders unrestricted passage from and to the Gaza Strip, as well as the disbursement of withheld salaries owed to Hamas employees.”

Throughout its rule of the Gaza Strip between 2007 and 2014, Hamas hired approximately 42,000 employees, who now endure dire living conditions, as a result of the consensus government failing to disburse their salaries since its formation in 2014.

In that context, the Fatah source opined that Hamas’ conditions constituted real obstacles for the opening of the Rafah crossing, because Egypt refuses to deal with Hamas, and the only available solution is for the crossing to be unconditionally handed over.

Concerning Hamas’ demand that it be included in consultations to open the crossing, the Fatah source said, “An agreement was reached and a reconciliation government was formed to govern Gaza. Why then should consultations be held with Hamas in that regard?”

On the other hand, Jamil Mezher, a member of the Palestinian Front for the Liberation of Palestine political bureau, said that the Rafah border crossing issue was one of the main obstacles standing in the way of implementing the reconciliation agreement.

He told Al-Monitor, “As a next step, Hamas should hand over the crossing to the consensus government and President [Mahmoud] Abbas, to adopt the measures necessary for it to reopen. In parallel, the consensus government must fully exercise its role and responsibilities, while working toward finding solutions to Gaza’s problems — most importantly, the issue of the Gaza employee salaries.”

For his part, political analyst Hassan Abdo told Al-Monitor, “Hamas feels aggrieved as a result of the failure to comprehensively implement provisions agreed upon with Fatah in the reconciliation agreement, leading to its refusal to hand over the Rafah crossing. The reconciliation agreement stipulated the formation of a consensus government that would take immediate control of Gaza. But said government wanted to govern Gaza without resolving any of its problems — most importantly, the salaries of Gaza’s employees appointed by Hamas since 2007.”

On the other hand, Abdo doubted that the agreement — which Ahmad referred to — between the PA and Egypt to reopen the Rafah crossing would put an end to its repeated closures. He added, “An important element must be addressed prior to keeping the border open to Palestinians — namely, the restoration of security in Sinai where frequent setbacks lead to the recurrent closure of the crossing.”

Despite the fact that opening the Rafah crossing is an urgent humanitarian need for Gaza residents, it remains subject to political considerations associated with the quarreling factions: Hamas and Fatah. Any agreement to reopen it is sure to fail in the absence of an agreement between the two parties in that regard.