In light of the dire economic conditions generated by the Israeli siege, Gazans search for food to eat and recyclables to sell. 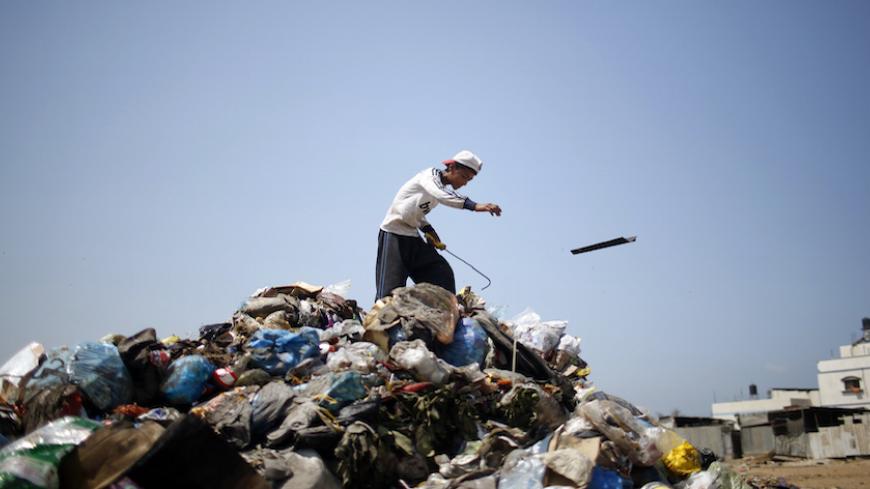 A Palestinian sifts through garbage for salvageable items at a local dump site, in the east of Gaza City, Sept. 2, 2013. - REUTERS/Mohammed Salem

GAZA CITY, Gaza Strip — At sunrise, Wael Naim starts his arduous task of sifting through piles of waste in Gaza City, looking for anything that can be recycled. His efforts are a major source of support for his five-member family.

Naim, 14, who is the oldest child in his family, told Al-Monitor, “My father used to work in contracting, but he stopped working more than half a year ago due to the recent Israeli war on Gaza, which destroyed the concrete factory that he used to work in. Israel also restricted the entry of cement into Gaza. So now I have a responsibility and look for [ways to make a living].”

He said that he searches the piles of garbage for anything that he can sell, such as plastic, copper and iron, to factories and blacksmiths that recycle them into products such as water drums, as well as nuts and bolts made of copper and iron, which are used as machine spare parts.

“I stop work at sunset and make about 20 Israeli shekels (about $5) a day, which I give in full to my father. He buys cheap bread and food for my family, as this amount doesn’t even buy half a kilogram [1 pound] of meat," Naim added.

The director of the Palestinian Banking Corporation and Palestinian Development Fund in the Gaza Strip, Nebras Bseiso, told the local TV channel Al-Wattan in November 2014, “The Israeli aggression on the Gaza Strip caused 12,000 workers to lose their jobs as a result of the destruction of industrial plants. Another 1,200 lost their jobs because of the closure of the border tunnels with Egypt."

Economist Samir Hamattu told Al-Monitor, “The blockade and the repeated Israeli wars on Gaza have affected living conditions and the local economy, and this has negatively impacted Palestinian society … citizens, especially children, sift through garbage in search of food or materials that may be sold.”

Hamattu added, “The unemployment rate in the Gaza Strip rose to 42.8%, driving tens of thousands of families to below the poverty line and without a fixed source of income. This has presented them with tough choices to secure their livelihoods.”

On Feb. 12, the Palestinian Central Bureau of Statistics posted on its website data for the fourth quarter of 2014, which showed that the poverty rate stood at 65%.

Hamattu also said that Israel is preventing the entry of several commodities and raw materials into Gaza. The Israeli siege that was imposed on the Gaza Strip eight years ago has led to the closure of many small workshops, such as blacksmiths and carpenters, and has put thousands out of work.

Mohammad, 13, was busy searching for food in a garbage container in the upscale al-Rimal neighborhood in Gaza when he spoke to Al-Monitor.

As he was removing a garbage bag from a trash can, he said that his father used to work in a metal workshop, providing his family with a daily income of about $7, and that because Israel is preventing the entry of iron, which it put on the list of contraband items, the workshop was forced to close, like dozens of other workshops.

Mohammad, who dropped out of school to do this kind of work, said that his brothers go to school but don't spend any money on candy like the other students, and that his mother does not buy new clothes on the market but gets worn clothes from neighbors.

The Israeli authorities created the list of contraband items following Hamas’ takeover in Gaza in June 2007; the list includes a variety of goods and raw materials that are banned from entering Gaza under security pretexts. The most recently added items on the list are iron pipes of all sizes and skewers.

The deputy head of the Palestinian Federation of Industries in Gaza, Mohammed Hamad, said on April 25 regarding the impact of this decision, “90% of metal materials are banned from entering the Gaza Strip under the pretext that they are meant for the resistance. This decision affects about 1,200 factories.”

The Israeli Legal Center for Freedom of Movement said in a report (no publication date available), “Israel refuses to reveal the content of the list, or other measures imposed to restrict the transfer of goods.”

The head of the Popular Committee Against the Siege, Jamal al-Khudari, said in a statement published on April 9, “The losses directly incurred by the industrial sector every year exceed $150 million. About 80% of Gaza’s factories were damaged by the Israeli blockade, causing their closure in whole or in part.”

Khudari attributed those losses to the tight blockade and the barring of raw materials and construction materials for the private sector, pointing out that more than 200 materials are banned under the dual-use pretext.

He accused Israel of “carefully choosing which raw materials to ban in order to ensure that the economic wheel stops and that thousands of workers, engineers, construction workers and factory workers lose their jobs.”

The siege of Gaza and the Israeli ban on a variety of materials have led to a dramatic increase in the number of people dependent on international aid. On March 2, Pierre Krahenbuhl, the commissioner general for the United Nations Relief and Works Agency for Palestine Refugees in the Near East (UNRWA), said during a meeting with members of the Foreign Affairs Committee of the European Parliament in Brussels, “The number of people who need UNRWA aid in Gaza to ensure their livelihood since the siege began [in 2007] has increased from 80,000 to 800,000 [in 2015].”

For Hamattu, a way out of the grim economic situation and the livelihood and financial crises in Gaza “requires a political solution that ends the Israeli blockade and prevents a repeat of the wars, as well as an end to the internal Palestinian divisions. It also requires allowing the entry of all types of raw materials to spur economic development and return life to Gaza.”