A lack of transparency in the bidding stage is clouding Gaza reconstruction ahead of the donor conference in Cairo. 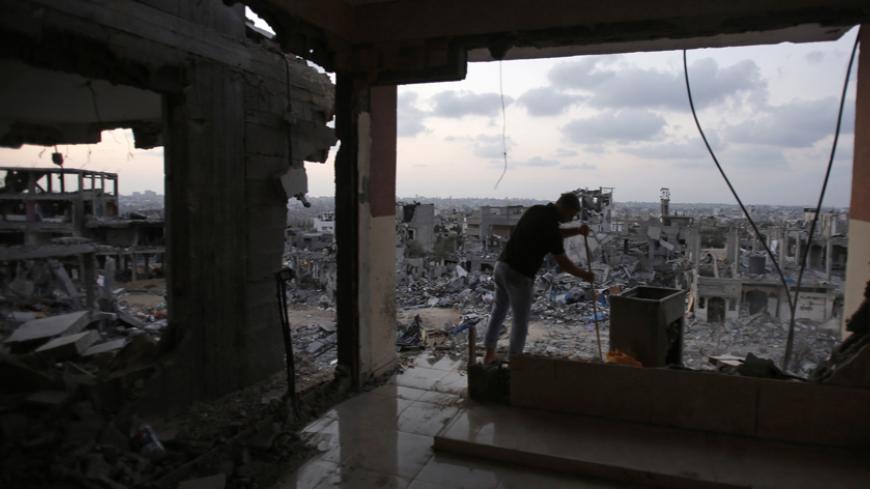 A Palestinian man cleans his house, which witnesses said was badly damaged during the Israeli offensive, in eastern Gaza City, Aug. 31, 2014. - REUTERS/Suhaib Salem

Palestinians in Gaza are looking forward to the donors conference for Gaza’s reconstruction, scheduled Oct. 12 in Cairo at the invitation of Egypt and Norway and under the auspices of Palestinian President Mahmoud Abbas. The conference will be attended by representatives of countries all over the world, as well as businessmen and local and global organizations. The donor conference has spawned a competition between businessmen and companies for contracts to reconstruct the Gaza Strip.

An economic official in Gaza told Al-Monitor, “Preparations are in full swing to [compete over] the largest share of the expected construction projects to follow the conference. This is done through communication with the related international bodies — [the United Nations Relief and Works Agency] and the [United Nations Development Program] in particular — and in coordination with the Palestinian government of national consensus, which is supervising all of the reconstruction projects.”

A senior Palestinian minister who asked not to be named told Al-Monitor about “rapid developments secretly taking place in preparation for the reconstruction of Gaza," saying, "Some economic institutions want to get the lion's share of the funds allocated to this reconstruction. So they market themselves to the donor countries — both Arab and Western — and demonstrate their ability to implement reconstruction projects in compliance with international standards.”

The minister described intense competition between the Palestinian Economic Council for Development and Reconstruction (PECDAR), headed by Fatah Central Committee member Mohammad Shtayyeh, and the Palestinian Investment Fund, headed by Economy Minister Mohammed Mustafa. Both institutes have prepared competing reconstruction plans for Gaza. Neither Shtayyeh nor Mustafa were available to comment for Al-Monitor on the differences between them and the plans that they will submit to the reconstruction conference.

At a Sept. 6 news conference in Ramallah, Shtayyeh stated that the destruction in Gaza created 2 million tons of rubble. He said reconstruction would take five years — if the Israeli blockade on Gaza is lifted.

Mustafa said Sept. 11 that 80 Arab and regional institutions have been invited to attend the Cairo conference in addition to the donor countries.

In mid-September, PECDAR issued a detailed report that included a comprehensive plan for the reconstruction of Gaza. The report, a copy of which was obtained by Al-Monitor, counts 200 broadsheets along with maps, tables and statistics and concludes that the total reconstruction cost for the Gaza Strip will amount to $7.8 billion.

Al-Monitor received estimated figures from a high-ranking official in the Ministry of Public Works in Gaza who shared them on condition of anonymity, “The total building materials [needed for the] reconstruction of Gaza is 1.5 million tons of cement, 227,000 tons of iron and 5 million tons of gravel.”

The Palestinian Investment Fund has countered, however, that it would present its own reconstruction program at the Cairo conference.

“Preparations are underway to print the final plan to be presented to the Cairo conference and [for it to] market its own reconstruction program of Gaza,” a source in the Palestinian Investment Fund told Al-Monitor, asking not to be named.

This prompted the editor-in-chief of Gaza's Al-Eqtisadiah, Mohammed Abu Giab, to tell Al-Monitor in an interview, “What is going on between PECDAR and the Palestinian Investment Fund is not a competition between two companies in the private sector, as they are offering their projects and plans based on their influence within the official Palestinian executive bodies.

“The monopolization of the Gaza reconstruction project by these two parties deprives the rest of the private sector companies from offering their contributions to this great project. They both consider it an investment opportunity to achieve greater profits and gains, away from the universally adopted standards,” he added.

Abu Giab said, “Some companies are arranging their papers, contracts and agreements in secret to suck Gazan blood and loot people's money under the pretext of facilitating and of supporting, reviving and reconstructing the private sector.”

Economists accused major Palestinian capital holders of hoarding the cake of Gaza’s reconstruction. These concerns over a battle between the major economic institutions for the reconstruction of Gaza have prompted representatives of nongovernmental organizations and private sector institutions to hold a meeting Sept. 21 in Gaza. Al-Monitor attended.

The party most notably absent in the war raging behind the scenes over Gaza’s reconstruction funds is Hamas, which refrained from taking a public position.

However, a senior Hamas official told Al-Monitor on condition of anonymity, “We received information on this subject, and we as a movement do not interfere in the nature of the economic movement that would accelerate the reconstruction of the Gaza Strip. [This is] despite our reservations about the absence of control and transparency mechanisms due to the absence of the Palestinian Legislative Council from the political reality. We are confident that once reactivated, this council will enact laws that would prevent any tampering with public money.”

In mid-September, the UN Special Coordinator for the Middle East Peace Process, Robert Serry, announced a plan to send construction materials into the Gaza Strip, along with 250 to 500 international inspectors to monitor the implementation of the reconstruction process, to ensure the building materials do not reach Hamas.

Al-Monitor asked the same Hamas official about Serry’s plan. He answered, “Hamas does not want to directly intervene in the reconstruction of the Gaza Strip, to avoid being accused of obstructing the outcome of the reconstruction as a whole, although we know that the humanitarian project is politicized.”

The official also warned of corruption in the reconstruction of Gaza, saying, “We also know that large sums of money have been raised to contribute to the reconstruction project and should not end up in the pockets of some of the influential people who are close to decision-making positions in the Palestinian Authority. Everyone should be allowed in the competition in an atmosphere of competitive freedom while unifying the consumption and funding channels in a way that does not obstruct Gaza’s reconstruction process.”