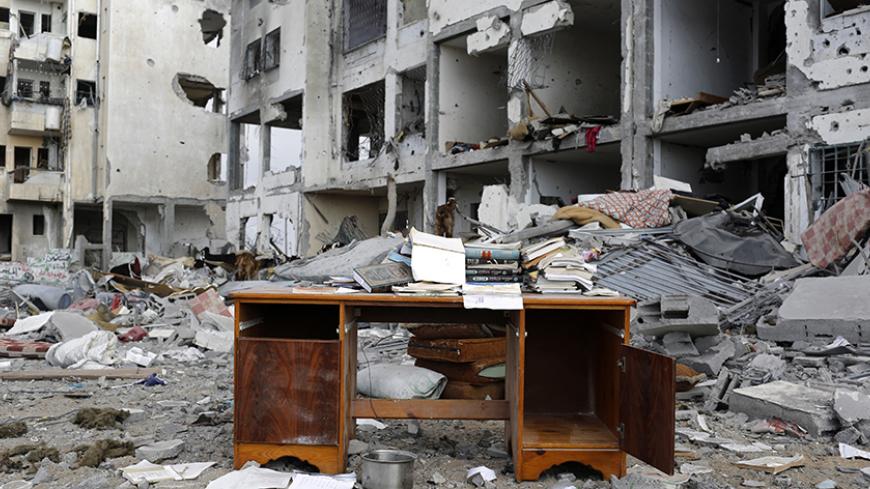 A desk sits amid the debris of buildings destroyed by what police said were Israeli airstrikes and shelling in the town of Beit Lahiya, Gaza, Aug. 3, 2014. - REUTERS/Finbarr O'Reilly

GAZA CITY, Gaza Strip — Almost three years have passed since the start of the 51-day Israeli war on the Gaza Strip in the summer of 2014. During this war, Israeli aircraft fully destroyed more than 11,000 housing units and partially destroyed around 160,000 others.

Mufid al-Hasayneh, the minister of public works and housing in the consensus government, posted April 5 a short documentary on his official Facebook page highlighting the ministry’s reconstruction efforts that have resulted in the completion of around 75% of reconstruction works.

On April 20, the ministry signed a series of contracts within the scope of the financial aid pledged by Italy at the Gaza Reconstruction Conference in Cairo on Oct. 12, 2014, and which include a grant of 16.45 million euros (around $18 million) for the reconstruction program of Gaza's al-Nada district.

Hasayneh told Al-Monitor, “The Italian grant will be disbursed to finance a series of contracts to be signed by the Ministry of Public Works with Palestinian construction and contracting companies. The contracts include the reconstruction of the Italian complex at a total cost of $5 million. The contracts also include the restoration of 17 partially damaged residential towers and the rebuilding of 11 towers that were totally demolished in al-Nada neighborhood, northeast of Beit Lahia, in addition to the construction of 90 housing units for the residents of Izbat Beit Hanoun.”

He added, “Palestinian construction companies, with support from Italian engineers, will start the construction of the Italian complex in the next few days, after the Italian government approves the final blueprints of the complex. This comes as part of implementing the terms of the grant between the two countries. Reconstruction should start after the month of Ramadan and end within one year.”

The Italian complex in the center of Gaza City is roughly 7,200 square meters and was built by an Italian contracting company in 1996. The 16-story high-rise is the only building in the Gaza Strip designed to withstand earthquakes and is home to numerous nongovernmental organizations (NGOs) and commercial companies.

During the last days of the Israeli war on the Gaza Strip, specifically on Aug. 26, 2014, Israeli warplanes bombed the Italian complex, which includes one of the highest towers in Gaza, with seven missiles, destroying it completely. The shelling caused considerable material and human losses due to the large surface area of the overpopulated targeted location. The assault killed 20 civilians, two of them journalists.

Jad stressed the commercial and economic importance of the Italian complex, which housed the headquarters and offices of NGOs, the headquarters of the Ministry of Public Works and Housing, and commercial companies. “It is necessary to bring back this complex to life, since it is one of the most vital urban landmarks in Gaza,” he said.

The complex, which vitalizes its surrounding area, comprises a main tower of 1,500 square meters consisting of 54 units housing commercial companies, offices for civil and human rights organizations and residential units. The remaining area is a large courtyard with a large banquet hall and over 150 stores and clothing franchises.

Abdullah Abu Hudros, the manager of Milano coffee shop, one of the most famous cafes in the Italian complex that was completely destroyed in 2014, told Al-Monitor that many shops in the Italian complex were damaged and their owners have yet to receive any compensation, whether from the Palestinian government or the donor countries that pledged aid to reconstruct the Gaza Strip.

“I hope the new agreement between the Ministry of Public Works and Housing and the Italian government will usher in the return of commercial life after three years of setback,” he said.

Mohammed Abu Giab, the editor-in-chief of Al-Eqtisadiah newspaper in Gaza, told Al-Monitor, “Despite the delay in disbursing the aid pledged at the Cairo Conference in 2014, announcing this project will have significant economic and commercial effects on the Palestinian private sector. Such projects redeem confidence in the Palestinian private sector, represented mainly by the businesses and NGOs located in the Italian complex, which is the largest in Gaza.”

However, he explained that the $5 million Italian grant would not be enough to give back the Italian complex its previous features, such as its earthquake-resistance structure and international safety and security standards.

Economic specialists believe the reconstruction of the Italian complex and the return of economic life to the center will have positive economic and commercial outcomes, given the complex’s contribution to the national economy. The coming months will prove if the reconstructed complex will live up to the expectations of Palestinians in Gaza.