The real estate sector in Gaza is booming in light of a fast-rising population and a small surface area, but will this spur benefit the government? 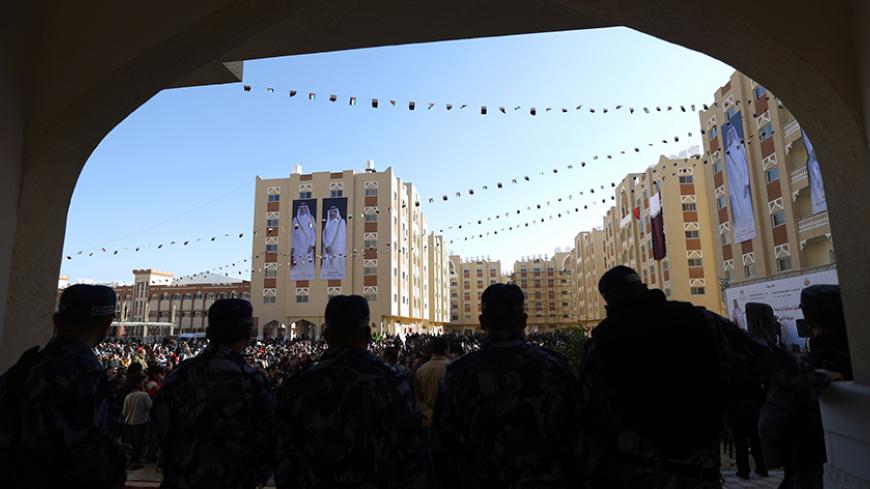 GAZA CITY, Gaza Strip — The real estate and residential construction sectors in the Gaza Strip are experiencing an economic recovery. After sustaining huge losses in the industrial sector following the 2014 Israeli war on Gaza, investors and others with capital are now investing sums significant enough to make these sectors the most profitable in Gaza, which is still reeling under a crippling economy stemming from the 10-year-long and ongoing Israeli blockade.

Osama Kahil, the Gaza-based head of the Palestinian Contractors Union, told Al-Monitor that the demographic increase in Gaza coupled with a halt in domestic factory production due to the blockade and successive Israeli wars on Gaza have led investors to pour their money into the construction of residential towers.

According to statistics released by the Interior Ministry in Gaza Jan. 18, the population at the end of 2016 stood at 2,015,064 people. A July 2016 press release from the Palestinian Central Bureau of Statistics had put the population density at 5,154 persons per square kilometer. Gaza covers an area of 365 square kilometers (141 square miles).

The owners of land in residential neighborhoods have been turning to investors and entrepreneurs to conclude profit-sharing contracts for constructing and selling residential units on their land. Murad al-Sharqawi owns a 1 dunum plot (1 dunum equals approximately 11,000 square feet) in Gaza City's Nasser neighborhood. He contacted a local investor to build a seven-story residential building on the land, which he inherited from his father, with the aim of reaping profits.

“I decided to invest in my real estate property instead of seeing it wither without profit,” Sharqawi told Al-Monitor. “I agreed with the investor to share the proceeds of the sale of the apartments, whereby I would get 40%.”

Iyad al-Batrawi, who owns a real estate agency in Gaza City, told Al-Monitor that he has witnessed a significant increase in the number of real estate properties on the market for sale or rent. “The real estate boom in the Gaza Strip started in early 2016 and continues flourishing somewhat to this day,” he said. “We had 120 properties offered for sale in Gaza City from the start of 2016 to this date, compared to 40 properties during the period from 2014 to 2015.”

According to Batrawi, a significant number of people have contacted him to view properties offered for sale. He said, “Only 10% of them can afford to buy the property they want in light of the constant rise in real estate prices due to the increase in population density; 90% of buyers conclude long-term installment purchase agreements, spread over 12 years or more.”

Naji Sarhan, the deputy minister for Planning and Development Affairs at the Public Works and Housing Ministry, told Al-Monitor, “The Gaza Strip suffers from a large deficit in housing units of about 60,000. Gaza annually needs 14,000 new housing units, commensurate with the population increase.”

Although confirming a recovery in the real estate sector, Sarhan also acknowledged a lack of reliable statistics on the number of new real estate developments. He further stated, “There is no stability in the real estate sector, which has suffered from the Israeli wars. Eleven thousand residential units were completely destroyed in the 2014 war on Gaza, compared to 170,000 residential units being partially destroyed, and only 40% of these units have been reconstructed to date.”

Kahil said construction materials have been entering the local market through Israel and Egypt. The route through Israel relies on a UN mechanism for monitoring and approving imports for reconstructing Gaza. Created by Robert Serry, the UN special coordinator for the Middle East peace process, the mechanism actually hampers the construction sector.

“But the entry of cement into Gaza through the Rafah crossing, controlled by Egypt, following the visit of Ismail Haniyeh, the former deputy head of Hamas' political bureau, to Cairo Jan. 23, somewhat alleviated the severity of the crisis and allowed traders and investors to carry out construction activities without hindrances,” he added.

Mohammed Abu Giab, editor-in-chief of Al-Eqtisadiah, told Al-Monitor, “Real estate investments are the safest for investors, because the prices of apartments are increasing over time in light of population growth and the depletion of usable land.”

He added, “Investment in the industrial production sector is a losing investment, because of the taxes imposed on this sector and in light of the electricity crisis, which increases production costs, not to mention the deterioration sustained by factories as a result of the Israeli blockade.”

In this vein, Kahil noted, “In light of the halt in production in Gaza, investment shifted toward consumer projects, such as real estate. This is a consumer and nondevelopmental sector. It is not beneficial to the national economy. Real estate property sales and purchase transactions occur only between two parties, the owners of the real estate and the client. The government imposes no taxes on and reaps no profit from these transactions.”

It appears that the real estate sector is the only option for investors these days, as growth in other sectors remains at a crawl. There may be trouble ahead, however, as usable land in Gaza becomes scarcer, perhaps contributing to making Gaza uninhabitable by 2020, as the United Nations has warned it might become.