Construction sector in Gaza under pressure

The Israeli siege and the deteriorating economic situation in the Gaza Strip have forced dozens of construction companies to shut down and relocate to the West Bank or neighboring countries. 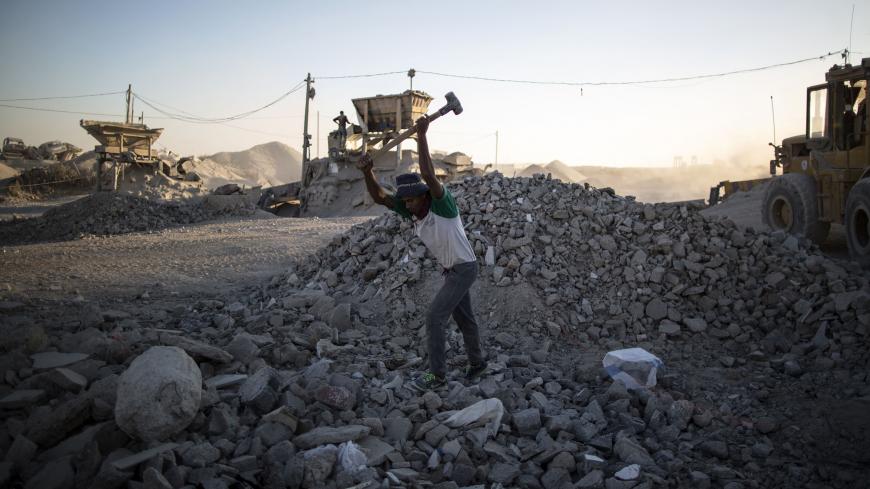 A Palestinian worker breaks stones at a factory where the rubble of houses that were destroyed during wars are recycled for reuse at construction sites, Gaza City, Gaza Strip, Nov. 6, 2016. - MAHMUD HAMS/AFP/Getty Images

GAZA CITY, Gaza Strip — Iyad Suleiman Abu Hamad, the owner of Abraj Makka Trading and Contracting Company, decided last summer to shut down his company in the Gaza Strip and move to the West Bank.

Abu Hamad’s company specialized in construction and maintenance, road construction and public works and was located in the eastern part of Khan Yunis, the second-largest city in Gaza. The company employed 30-50 Palestinians. But in July 2018, it shut its doors and Abu Hamad moved to the West Bank.

He told Al-Monitor, “The stagnation in Gaza’s market, the fall in the price of construction material, the lack of monetary liquidity and people’s weak purchasing power prompted me to close the company and move to the West Bank.”

He said, “There are no encouraging factors to live and work in Gaza. The situation is frustrating and companies are suffering losses. Nobody is there to save us. I decided that the best step was to move building operations to the West Bank.”

Abu Hamad added that one of his friends who owned a contracting company in Gaza shut it down in 2017 and moved to Sudan for the same reason.

In addition, the study noted that since the start of the Israeli siege 12 years ago, Gaza's construction sector has been using only 15% of its overall capacity amid a deterioration of the economic situation.

Massoud al-Sdudi, owner of Al-Sdudi Trade and Contracting Company in Gaza, which halted its operations in 2018, said that a decrease in price of raw material, lack of construction bids and a halt of projects in the market put the company out of work.

Sdudi told Al-Monitor that 1,000 employees worked in his company before it stopped operating completely. He said, “This is an unforgivable crime and I am seriously thinking of traveling and working abroad.”

Farid Zakout, CEO of the Palestinian Federation of Industries who supervised the study, told Al-Monitor that the construction sector in Gaza has suffered significantly from the Israeli wars on Gaza since 2008.

According to the study, the 2014 war on the Gaza Strip destroyed more than 350 industrial facilities and 100 construction facilities, including steel and cement factories.

As a result of the Israeli blockade, around 90% of factories, workshops and shops in the Gaza Strip suffered losses and 300,000 Palestinian employees were left without work, Jamal al-Khudari, head of the Popular Committee Against the Siege, said in an April 30 press statement.

Zakout noted that other factors that have pushed contracting companies to file for bankruptcy, shut down or relocate abroad include a lack of funding for projects financed by international construction companies and the slow progress of existing projects. As a result, companies have been unable to sell their products.

He said that the international mechanism for the reconstruction of the Gaza Strip, known as the Gaza Reconstruction Mechanism, and the plan submitted by Robert Serry, the United Nations special coordinator for the Middle East peace process, resulted in many companies being out of work. The strict regulations imposed by Israel on the entry of construction material into Gaza, and the approval required from Israel to carry out any project, has increased the cost of work and amplified risks.

On Sept. 16, 2014, Serry informed the UN Security Council that the Israeli government and the Palestinian Authority (PA) agreed to allow the entry of construction material into the Gaza Strip and to impose strict control and measures on building material to ensure that they would not be used for non-reconstruction purposes, i.e., the tunnels that have been built by some Palestinian factions.

Zakout noted, “The economic situation in Gaza is bad because of the Israeli blockade and Palestinian rift. Besides, due to the salary crisis many employees rely on banks to provide loans so they can buy an apartment, for instance.”

He said that the contruction sector is the largest employer of Palestinian labor and that this situation portends the shutdown of more contracting companies and the dismissal of more employees.

The Palestinian Federation of Industries study showed that the number of workers in the construction sector in Gaza has dropped to 1,840 this year so far, compared to 3,168 in 2018, recording a 42% plunge.

Osama Kahil, head of the Palestinian Contractors Union in the Gaza Strip, said, “There are 300 contracting companies in Gaza and closing or moving them abroad is happening quickly, which was not the case in the past.”

Ali al-Hayek, head of the Palestinian Businessmen Association in Gaza, accused Serry's UN agreement of dealing the final blow to the construction sector in Gaza, because it put the sector under Israeli and international scrutiny controlling the sector's access to material.

Hayek told Al-Monitor that this plan imposed a new siege on the Gaza Strip because it caused the closing of companies and factories and hindered the economic growth of the construction sector. He noted, “Any company or factory in Gaza that does not abide by Serry's plan ultimately closes down.”

He added, “We refused this plan from the start because we cannot allow this level of monitoring in our own country. Besides, it aims at instilling economic subordination to Israel.”

“Despite the recent truce understandings between Hamas and Israel the blockade is still in place. The understandings should include ending the siege, reviving industrial areas and allowing the entry and export of raw material to avoid a catastrophe," Hayek concluded.