Will Gaza contractors be able to resolve their crisis?

The losses incurred in the construction sector in the Gaza Strip since 2007 have prompted the Palestinian Contractors Union to plan a September exhibition with the goal of promoting this sector; success in this endeavor, however, may hinge on the Palestinian Authority. 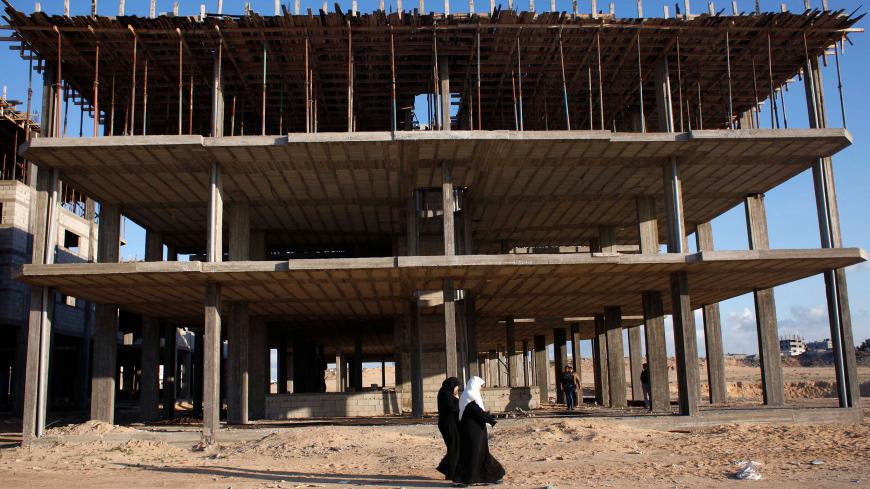 GAZA CITY, Gaza Strip — During his April 22 visit to the headquarters of the Felesteen newspaper in Gaza City, Osama Kahil, the head of the Palestinian Contractors Union in the Gaza Strip, said the union is organizing a conference and exhibition in Gaza City involving 400 Arab investors and contractors in order to open up new investment channels for Gazan contractors.

The Israeli siege, which has been ongoing since 2007, has caused the Gaza construction sector $60 million in losses and driven 50 companies out of the market.

Kahil told Al-Monitor, “The exhibition seeks to promote the Gaza construction sector by sharing with the Arab investors and contractors what the construction companies have experienced.” He added, “The goal is to have these investors finance economic and development projects in Gaza, particularly since USAID, whose operational projects are estimated at around $215 million a year, ceased activities in the Palestinian territories.” Kahil also said the exhibition seeks “to convince Arab investors and businessmen to have Gaza construction companies operate in Arab countries such as Jordan, Egypt, Algeria, Sudan and Oman.”

He said, “We prepared a list of 250 Arab contractors and businessmen to be invited to the conference. They are mainly from Jordan, Egypt, Saudi Arabia, Lebanon, Sudan, Algeria, Oman and Qatar; 150 contractors from the West Bank will be also invited. The exhibition will be held under the umbrella of the Palestinian Authority (PA), from which we seek approval for the exhibition to be held in September.”

In parallel, a union delegation met with the head of Hamas' politburo, Ismail Haniyeh, in Gaza City on April 20, where problems and challenges the contractors have been facing in the Gaza Strip were discussed. Kahil told Al-Monitor that Haniyeh welcomed the idea of holding an exhibition.

Through such an exhibition, the union seeks to have Arab businessmen and investors start development and operational projects in the Gaza Strip, such as water and sewer projects and road and residential cities' construction, and to have some Gaza construction companies work in Arab countries.

Awni al-Basha, assistant undersecretary of the Ministry of Finance in the Hamas-run Gaza Strip, said April 22 that his ministry signed an agreement with the union in Gaza that could allow financially ailing contractors to pay income taxes with pending tax refunds.

Gazan contractors have demanded that the Finance Ministry in Ramallah pay them 200 million shekels ($56 million) in PA tax refunds. This money is due to 120 companies, Alaa Aaraj, the former head of the Palestinian Contractors Union in the Gaza Strip, said in December.

The Gaza contactors had paid the Ministry of Finance in Ramallah a value added tax of 16% on purchases for projects they implemented in the past 12 years (2007-2018) and are demanding that the ministry pay them investment incentive refunds — which they say reached a total of $56 million in 2019 — considering that Article 22 of Law No. 6 of 1995 stipulates that such projects are to be exempt from taxes and customs tariffs.

Osama Nofal, director general of the Planning and Policy Department at the Gaza Ministry of National Economy, told Al-Monitor that the ministry “is well aware that a settlement to end the crisis the contractors have been suffering from is required.” He said, “Based on that, the ministry supports the union in claiming the tax refund. They should not be a victim of the political differences that PA sanctions on the Gaza Strip have caused.”

Maher Tabbaa, the director of public relations and media at the Gaza Chamber of Commerce and Industry, told Al-Monitor, “Opening up investment channels to Arab countries, as is the case in Algeria, could help pave the way for the union to open up investment opportunities in other countries, such as the Arab Gulf, Lebanon and Sudan. Yet this would require a detailed economic feasibility before implementing the plan.”

Fahed Yassin, a contractor, told Al-Monitor, “The construction sector in the Gaza Strip can no longer withstand the status quo. My company has ceased activities and has not been granted any contracts in the past three years, which led me to lay off all employees and sell its assets, as the losses went beyond $100,000 throughout said period of time.” He also said, “We are looking forward to opening up new investment channels in Arab countries in order to compensate for the losses we have incurred.”

The construction sector is a primary engine of economic growth in the Palestinian territories, especially in the Gaza Strip, and contributed 6.5% of GDP (around $889 million) in the territories in 2017. While there were 350 companies registered with the Palestinian Contractors Union in the Gaza Strip in 2007, the number dropped to 150 by May 2018 due to the lack of projects. Prior to the siege, this sector employed 23% of the labor force in the Gaza Strip. This figure, however, declined to 9%, Aaraj said in May 2018.

Samir Abu-Maddalah, a professor of economics at Al-Azhar University in Gaza, told Al-Monitor, “There are laws and conditions regulating the transfer of investments among countries. Thus, the union needs to consider the investment laws in counties where it seeks to work, and to check whether or not its companies are able to compete with local companies."

Khalil Rizk, president of the Federation of Palestinian Chambers of Commerce and Industry, told Al-Monitor, “The union’s success with the conference banks on the involvement of the PA, which would give it a legitimate character and would reassure foreign investors that their money will be in safe hands.”

“We perceive that encouraging Arab investors to invest in the Gaza Strip will be more beneficial to the economy than having Palestinian companies operate abroad,” he added.

The political differences between the Gaza Strip and the West Bank could be obstacles to the exhibition. The contractors' demands involving the tax refunds, which the Finance Ministry in Ramallah refuses to pay, would be a barrier to the implementation of its outcomes as well, as these companies perceive that this rejection is a part of the policy to stifle Gaza, which has caused dozens of them to go bankrupt.