Now that the Palestinian Authority has assumed control of the Gaza Strip crossings, the next step is to make it easier for builders to get reconstruction materials across the border and to suspend the current system, which Gaza contractors say is disastrous. 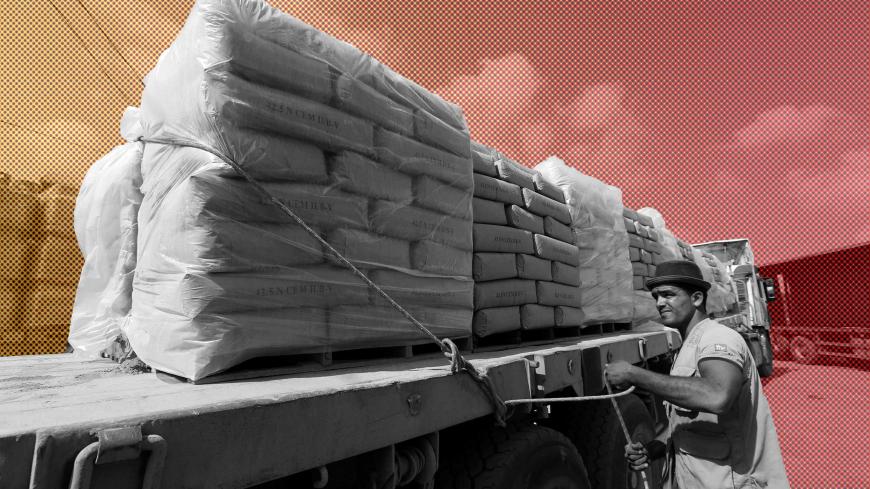 A Palestinian man stands next to a truck loaded with bags of cement at the Kerem Shalom crossing between Israel and the southern Gaza Strip, May 23, 2016. - REUTERS/Ibraheem Abu Mustafa

GAZA CITY, Gaza Strip — Israel has agreed to suspend on Jan. 1 the Gaza Reconstruction Mechanism (GRM), a deal Palestinian contractors say has put many of them out of business and cost the Contractors Union millions of dollars a month, according to a representative of the new consensus government.

“We received a positive response from the Israeli government regarding our demand for the suspension of the GRM," Mufid al-Hasayneh, the minister of public works and housing for the new consensus government and a representative of the Palestinian presidency, told Al-Monitor.

"We were promised, as representatives of the consensus government, that this mechanism will no longer be adopted as of 2018," he said. "[In the meantime], technical and legal committees will be formed between the Palestinian consensus government and the Palestinian Contractors Union to distribute the shares of construction materials to contractors as part of the government's responsibility to compensate for the losses the private sector sustained under the GRM.”

On Nov. 1, the Palestinian Authority (PA) took over the Gaza Strip border crossings, which had been administered by Hamas. This step came within the scope of the Palestinian reconciliation agreement, signed Oct. 12 in Cairo. One of the PA's first decisions after taking control of the Rafah crossing on the Egyptian border was to stop imposing taxes Hamas had levied on goods entering the Gaza Strip.

The GRM allows Israel to restrict construction materials entering the Gaza Strip. It has been in place since September 2014, under UN supervision, following the war between Israel and Hamas that summer. The agreement established a system of inspections and monitoring of imports into Gaza, ostensibly to enable the Palestinian government to lead reconstruction efforts, empower the private sector in Gaza, reassure donors that their investments in reconstruction work in Gaza would be implemented without delay and address Israeli security concerns about potential “dual use” materials, to prevent the Palestinian resistance from getting its hand on any of the materials.

Under the GRM, builders present a list of all their reconstruction requirements to the PA Ministry of Works. The UN then supervises as Israeli authorities hand the materials over to Gaza. However, Israel sometimes takes up to three months to provide entry permits, resulting in heavy losses for the contractors. In addition, the quantities of construction material Israel allows to pass through are insufficient.

Hamas took control of the Gaza Strip from the Fatah-dominated PA in 2007. Now that the PA is again administering the area, the PA believes the GRM is no longer needed.

Hasayneh said the consensus government has also discussed the matter with the UN delegation overseeing control of the crossings. "The consensus government is fully prepared to follow up on and control the mechanisms of reconstruction through our competent authorities represented by the ministries of economy, public works and housing and finance, without the need for UN supervision.”

Between September 2014 and the beginning of this month, 2.57 million metric tons of construction materials entered Gaza under the GRM. Some 1,276 large projects were registered with the GRM; 319 projects are active and receiving supplies. The average daily quantity of cement supplied since the GRM was implemented was 1,147 tons per day, with rebar averaging 179 tons per day. In that time, the GRM registered 101 vendors, 259 contractors, 30 concrete factories and 193 block factories.

An Oct. 4, 2016, statement by the Contractors Union blamed the GRM for putting 240 block factories and more than 70 contractors out of business.

“Since the PA took over the Gaza crossings [on Nov. 1], it must answer our demands and suspend the GRM," Alaa al-Aaraj, the head of the Contractors Union in Gaza, told Al-Monitor. "We addressed Prime Minister Rami al-Hamdallah during his visit to Gaza on Oct. 2 and threatened to take escalatory steps if this mechanism is not stopped. In this context, the Contractors Union could stop cooperating with the consensus government. The mechanism has caused us about $15 million per month in losses, and this is why it needs to be suspended.”

Mohammed Abu Jayyab, the editor of Gaza's Al-Eqtisadiah newspaper, told Al-Monitor, “The GRM was one of the obstacles blocking the reconstruction process. It is the main reason why contractors went bankrupt, since the mechanism can control every detail in the reconstruction process and exclude and dismiss contractors. … This mechanism has [also] wasted tens of millions of dollars of donor funds, which should have gone to help families affected by war.”

He added, “This is why the PA’s effort to suspend the GRM will help revive the construction sector in Gaza, which means the private sector as a whole in Gaza can finally get back on its feet.”

Perhaps the coming days will show whether Israel will live up to its promise to suspend the GRM, and the consensus government will reveal details of its plans to expedite the flow of construction materials as it monitors the reconstruction in Gaza.