The Egyptian authorities allowed for dozens of trucks carrying construction materials to enter the Gaza Strip through the Rafah crossing, as part of its openness policy toward the small enclave that has been besieged by Israel since 2007. 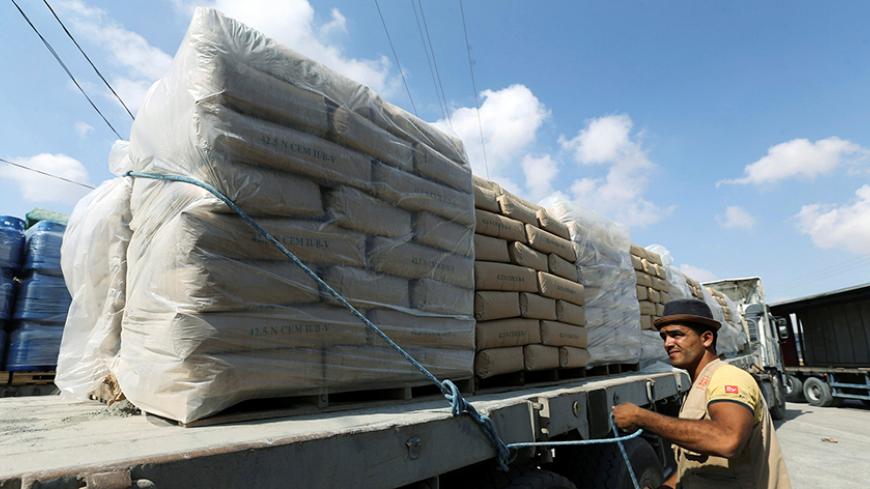 A Palestinian man stands next to a truck loaded with bags of cement at the Kerem Shalom crossing between Israel and southern Gaza, May 23, 2016. - REUTERS/Ibraheem Abu Mustafa

GAZA CITY, Gaza Strip — In the context of the recent openness policy that Egypt has come to adopt toward the Gaza Strip, the Egyptian authorities allowed the entry of dozens of trucks loaded with construction materials and food through the Rafah crossing on March 9. For the first time since the siege on Gaza, Egypt allowed the entry of heavy construction trucks, namely concrete pumps. Ten years ago, Israel had banned concrete and several other substances in Gaza for being of dual use (civilian and military).

The industrial sector in the Gaza Strip expects these deliveries to help finance the deficit in the construction field in the Gaza Strip, as the 2014 Israeli war on Gaza destroyed more than 65% of construction facilities. The trucks, however, have raised the ire of Israel, according to whom the deliveries damage its own interests given that Hamas could use the goods — along with other construction materials — to build attack tunnels into Israel.

The Egyptian policy of openness toward the Gaza Strip came in the wake of the multiple visits made by leaders of the Hamas movement, which controls Gaza, to Egypt in early January. Several meetings were held with Egyptian officials with the aim of revisiting the tense relationship between the two sides. Tension had mounted after Egyptian President Abdel Fattah al-Sisi rose to power in 2014 and Cairo accused Hamas of meddling in Egyptian affairs.

Khalil al-Zayan, the director of public relations and media at the Palestinian Ministry of Transportation, told Al-Monitor that the trucks were destined for the private sector in the Gaza Strip. Contacts were established between owners of concrete companies in Gaza and Egyptian companies specialized in the manufacturing of such equipment to ensure the arrival of the trucks into Gaza. Israel had refused to allow the entry of such trucks into Gaza, and some are concerned that it would pressure Egypt into preventing the entry of heavy construction trucks into the enclave.

Zayan expects the heavy construction and engineering equipment that Egypt allowed in the Gaza Strip to breathe new life into the industrial sector, which is ailing due to the Israeli siege imposed on the Gaza Strip since 2007, and the three Israeli wars during which a lot of equipment has been destroyed and reconstruction activities slowed down.

Zayan explained that the entry of these trucks and equipment has been approved by the Ministry of Transportation in Gaza, which is offering multiple facilities, including the reduction of customs fees, to the Palestinian importers and companies as a contribution to the rehabilitation of the concrete constructions and factories. He hopes that Egypt will maintain this policy over the coming days.

On March 6-8, trucks were allowed to pass through the Rafah crossing, which was the first time that heavy trucks from Egypt are allowed into Gaza. After the entry of these trucks, Egypt closed the crossing again amid expectations that it will reopen it in early April.

Mohammed al-Assar, the head of the Federation of Industries in Gaza, told Al-Monitor that the construction sector in Gaza needs at least 20 concrete pumps and 40 concrete trucks to be able to fill the local market needs amid the large construction activity needed.

He said that many owners of concrete companies are contacting heavy construction equipment companies in Egypt to place their orders after the Egyptian authorities recently allowed the entry of such equipment into the Gaza Strip. He noted that the price of one of those trucks exceeds half a million dollars, which is a very large amount compared to the prices offered in the European market ($100,000-$150,000 per truck). But as Israel bans Palestinians from importing those trucks, Gazans find themselves forced to buy them at a high price from Egypt.

Assar added that the Federation of Industries contacted the Israeli authorities and the Palestinian Authority in Ramallah several times over the past years to request the entry of such equipment into Gaza. But Israel refused this, claiming Palestinian factions would use the materials brought in for the construction of tunnels.

Ever since it imposed the blockade on Gaza, Israel set a long list of goods banned, including heavy trucks and cranes, which it considers dual-use material, for fear of the Palestinians using them in attacks against it.

In this context, Ayman al-Buhaisi, the owner of Tahrir concrete factory in Gaza, told Al-Monitor, “Thirty-three concrete factories have been affected for 10 years now because they cannot upgrade their equipment.” He said the concrete pumps at his factory were made in 1988 and require constant maintenance, but he is not allowed to import any modern equipment.

He added, “It costs me over 30,000 shekels [$8,266] for the maintenance of one old truck. It will cost me the same amount to import a used truck in good condition from Israel — like I did before the siege.”

Buhaisi noted that Israel also prevents the entry of spare parts, so he often uses parts found in old factories to fix his equipment.

He said that although Egypt allowed the entry of only a small number of heavy trucks for the construction and industrial sector in Gaza, it has restored hope in the possibility of factory owners renovating their equipment.

Maher al-Tabbah, an economic analyst and the director of public relations at the Palestinian Chamber of Commerce, believes that the modern equipment that came from Egypt to Gaza through the Rafah crossing will save owners the trouble of having to maintain old equipment that was supposed to have been out of service for years now, thus increasing the profits of these companies.

Tabbah told Al-Monitor that Gaza is in need of hundreds of construction and industrial equipment in order to revive the economy after years under the blockade and the successive Israeli wars on Gaza. He said he expects larger quantities of equipment to enter into Gaza in the coming period, especially in light of talks about commercial exchange between Egypt and the Gaza Strip.

Palestinian company and factory owners in Gaza wonder whether Egypt will continue to bring equipment into the Gaza Strip and contribute in resuscitating the Gazan economy, or whether it will eventually succumb to Israeli pressure and stop supplying it with such equipment.